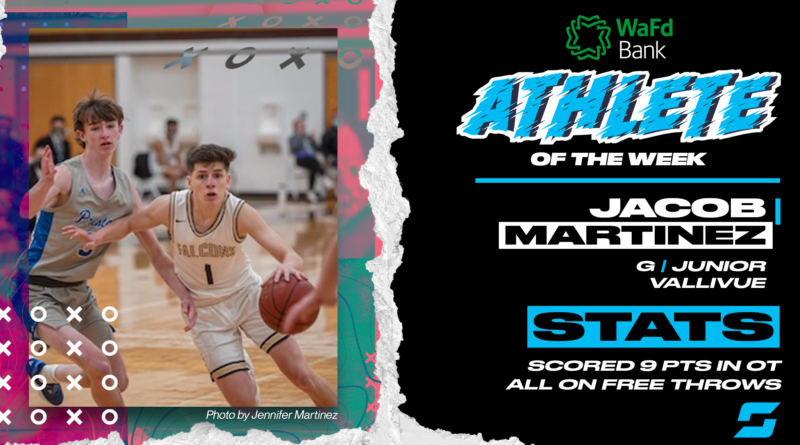 The guard scored nine of his team-high 22 points in the second overtime period, all on free throws as the Falcons tripped up Columbia in a district-round game, writes the Idaho Press.

Martinez ran away with this week’s honor, receiving 76.06% of the vote.

Brady Power, Dietrich: The quarterback of the state-winning football team showed up huge in the district round in basketball, pouring in a tournament-best 38 points in a win over Richfield.

Jonathan Camarillo, Hansen: The talented center came up big with 35 points, including four 3-pointers, and 14 rebounds in a season-ending loss to Carey. He scored 23 of his points in the second half, writes the Idaho Mountain Express.

Thatcher McLinn, Council: The sharp-shooter was deadly from deep, connecting on 10 3-pointers to account for all of his game-high 30 points in a district-round loss to Richfield, writes the Twin Falls Times-News.

Jalen Skalsky, Lakeland: The guard exploded for a game-high 26 points, including a pair of 3-pointers, as the school defeated Moscow for a 4A district title, writes the Lewiston Tribune.

Jaylen Alexander, Columbia: Twice, he came up big at the end of regulation and the first overtime with big shots, but his game-high 24 points were not enough to overcome Vallivue in a district-round game, writes the Idaho Press.

Blake Thurston, Cascade: The senior guard led his team with 24 points, including a 12-of-15 showing at the free throw line, but the Ramblers lost to Council in a district-round game.

Cole Schlader, Prairie: The spark behind the Pirates’ big fourth-quarter comeback, he scored 23 points in a district loser-out game over Genesee, writes the Lewiston Tribune.

McKay Anderson, Meridian: The senior guard scored a game-high 22 points, sparking the No. 2 Warriros’ third-quarter run with eight points, including a four-point play, to stun No. 1 Rocky Mountain for the 5A District III title, writes the Idaho Press.

Lloyer Driggs, Thunder Ridge: The guard had a game-high 22 points, but the Titans lost to Madison in a district-round game, writes the Post Register.

Connor Gardner, Liberty Charter: He was the game’s big contributor in a low-scoring game – 22 of his team’s 38 points – as the Patriots beat Murtaugh in a district-round game.

Dallin Parke, Carey: The senior scored 21 points with a pair of 3-pointers and four assists in a district-round win over Camas County, and 20 points and six assists in a state-clinching victory over Richfield, writes the Idaho Mountain Express.

Tyler Medaris, Middleton: The junior forward led his team with 16 points, and sparked a big third quarter with seven consecutive points as the Vikings defeated Bishop Kelly to win the 4A District III crown, writes the Idaho Press.

Michael Mitchell, Kuna: The Kaveman’s senior became the 30th wrestler in state history to win four consecutive IHSAA when he edged Meridian’s Nathan Gregory in overtime, 8-6, to win the 5A title at 132 pounds, writes the Idaho Press.