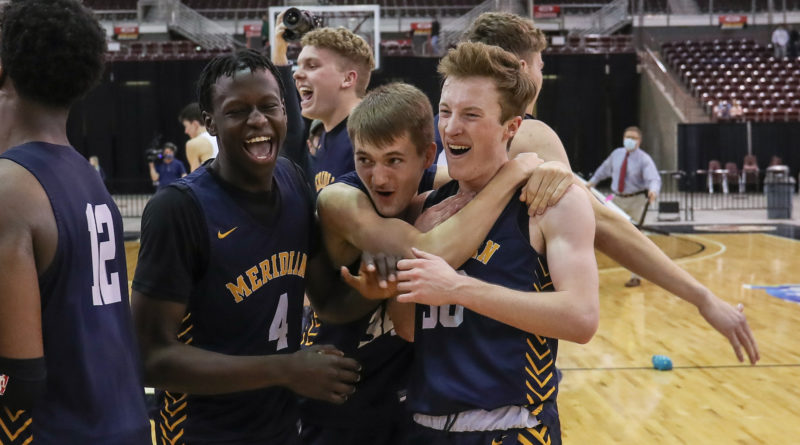 NAMPA – Jeff Sanor was the one to carry the 2021 5A State Championship blue trophy out of the building.

“I want it to return to Meridian,” said the Meridian High School boys basketball coach while laughing. “If one of those guys gets it, you’ll never see it again.”

It’s hard to blame him.

The piece of hardware will be the first one that the program has put in the school’s trophy case since 1992 following a 68-54 win over Lake City Saturday evening in the 5A State Championship game at the Ford Idaho Center.

“We’re all so happy to bring a (title) to Meridian,” Meridian senior guard McKay Anderson said. “We all love our school so much, we have so much school spirit. We’re just happy to do it for the guys before us and everyone who grinded before us to get us to this point.”

It was a moment that didn’t seem likely not that long ago. But one Sanor expected when he took the job in 2017.

Meridian was coming off its ninth losing season in 10 years and hadn’t been to state since 2007 when Sanor, who won a state title as a player with Boise High School in 1986, walked through the doors.

The Warriors had consecutive winning seasons in Sanor’s first two years before ending the state tournament drought last season with a 21-6 record.

“He’s done an incredible job,” Anderson said. “He’s the best coach I’ve ever had. He’s really just gotten the most out of every single one of us. I can’t even put into words how much he’s meant to this program.”

That, along with bringing back three All-5A Southern Idaho Conference players and their entire starting lineup from last year minus Donovan Sanor, suddenly turned them into the favorites going into this season.

“Whether we won by 30, 10 or five (points), we just stayed hungry and kept the same mentality.”

Meridian (20-1) won its first district championship since 2003, first-round state tournament game since 2003 and advanced to the final for the first time in 20 years. But there was one more thing the Warriors had to take care of Saturday night.

It wasn’t easy, though.

Meridian was really challenged by the Timberwolves (18-7) for the first time at state. The Warriors trailed for the first time all tournament long on four separate occasions.They saw their second-leading scorer Mpoyo get in early foul trouble. He picked up his third foul with 1:17 remaining in the opening quarter.

But Anderson bailed them out. He racked up 19 of his game-high 23 points in the first half. After Lake City took a 28-27 lead on a layin by sophomore Blake Buchanan with 5:10 left in the second quarter, Anderson scored nine of the Warriors’ final 13 points of the half, including a personal 6-0 run, to give them a 40-32 advantage at the break.

Chants of, “You can’t guard him” and “MVP” from the student section quickly ensued.

“That’s the McKay that we saw all fall,” Sanor said. “He was trying to be such a floor general in the middle of the season that his scoring went down. But that’s his normal scoring talent. That guy put the ball in the basket a bunch of different ways. And he was huge for us tonight.”

The Warriors never trailed again after that and put the game away for good with a 10-2 run in the fourth, capped by who else, Anderson. His floater gave them a 59-45 lead with 4:07 to go. Their lead never dipped under 12. Junior Davis Thacker dribbled out the final 50 seconds before tossing the ball aside to celebrate something 29 years in the making with his teammates.

Three other players reached double figures in scoring for Meridian. Rowbury had 13 points and four rebounds. Thacker and senior Drayson Fisher, who ran toward the Meridian sideline and pointed toward his ring finger, each finished with 10 points. Fisher also tallied five assists. Mpoyo and Anderson finished with six boards apiece as well.

Sophomore Kolton Mitchell led four different players in double figures with 15 points for Lake City in the loss. Sophomore Zach Johnson was right behind with 14 points. Buchanan had 11 points and senior Jack Kiesbuy rounded it out with 10 points. Buchanan nearly had a double-double with nine boards. Mitchell also chipped in with five rebounds for the Timberwolves, who just two seasons after winning three games, reached their first final in 19 years.

“I told them, ‘There’s no reason to put your head down,’” Lake City coach Jim Winger said. “They’re pretty emotional obviously, especially the seniors, but we got a lot of people coming back, a lot of good ones.

“… We had an awesome year, won the league title, won the district title, made it to the state final, and I’m very proud of that.”