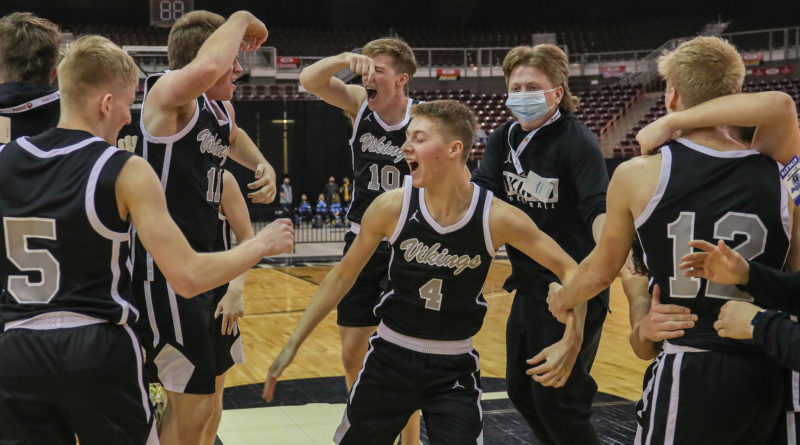 NAMPA – It was the first thing Andy Harrington noticed when he got the job three years ago.

The Middleton High School boys basketball coach saw just one banner hanging in the rafters of the gymnasium, and even it was a bit faded. It was hung back in 1965 after all.

Well, Harrington, who coached his final game with the Vikings after accepting the Owyhee High School boys basketball job last month, delivered a fresh banner as a parting gift. The Vikings upended reigning champion Preston 47-45 in the 4A State Championship game Saturday at the Ford Idaho Center for their first title in 56 years.

“The Middleton community was hungry for a championship,” Harrington said. “They are a basketball community. They bought in. They got behind us. The kids were bought in from the start and they worked hard. And they’re going to continue being successful. I’m really excited as they move forward and follow them. I’ll always be a Viking. I’ll always root for the Vikings.”

Junior Tyler Medaris led the way with 12 points and six rebounds. Merit Foote added eight points and senior Dallin McKnight chipped in with five boards for No. 1 Middleton (23-4), which finally got the Preston monkey off of its back.

The fifth-ranked Indians (19-8) had knocked the Vikings out of title contention in each of the last two years. They beat them 53-42 in the opening round in 2019 before winning a 51-50 semifinal nail-biter last year. Middleton had a chance at the end last season to win. But Tyler Robinett, who is now playing for the College of Idaho, shorted a 15-foot fadeaway jumper off the rim as time expired.

“That one hurt quite a bit,” Foote said. “I laid in bed at night for probably three months thinking about that one.”

Middleton did beat Preston 61-52 in the regular season on Dec. 30, 2020. But this was the stage that the Vikings really wanted to do it on.

“The rivalry with them, it was real,” Harrington said. “He’s (Tyler Jones) a phenomenal coach and we knew we had to bring our ‘A’ game and it was awesome getting over the hump with them.”

The latest chapter was a good one, too. There were seven lead changes and six ties and neither team led by more than seven points. But it was Middleton – thanks to its defense and shooting – who was able to pull away ever so slightly in the second half.

The Indians scored just 13 second-half points until the final minute of the game. The rest of their points only came on free throws and one meaningless 3-pointer at the buzzer. Preston made just six field goals over the final 16 minutes and shot just 30% from the field to boot.

Meanwhile, Middleton, which struggled with its shooting in the first half (26.3%), shot 60% from the field in the second. It allowed the Vikings to start the fourth on an 8-2 run. It was capped by a running layin by McKnight, giving them a 43-36 advantage with a minute to play.

“We had one half of basketball left for that group’s entire career,” Medaris said. “… And I mean we came through.”

Preston did trim the deficit to 45-42 with 13.3 seconds to play after senior Gabe Hammons drew a foul on a 3-pointer and hit all of his ensuing free throws. But Medaris lobbed a pass to McKnight, who dished it out to junior Owen Graviet for a wide-open layin with about six seconds remaining to all but seal it. Freshman Druw Jones drained a 3-pointer at the buzzer, but it didn’t matter. The drought for Middleton had finally ended.

“It started with our coaches,” Foote said. “They’ve been bringing that up forever. I guarantee you there wasn’t a week of practice where he (Harrington) didn’t bring up the ’65 championship team. And now it’s been so long, so it’s been a huge motivation for all of us and I’m just so grateful that we finally were able to get it done.”

Hammons scored a team-high 13 points with four boards for the Indians, who reached their sixth straight title game. Preston, which had won four of the last five titles, did so even after losing six of its top seven players from last year’s championship team, including 4A Player of the Year Ty Hyde.

“No one gave these kids a chance,” Jones said. “It was a whole new group and all year they’ve just exceeded expectations and gotten better and better. And to play in the state championship for a sixth year in a row, is a tremendous accomplishment for these kids.”