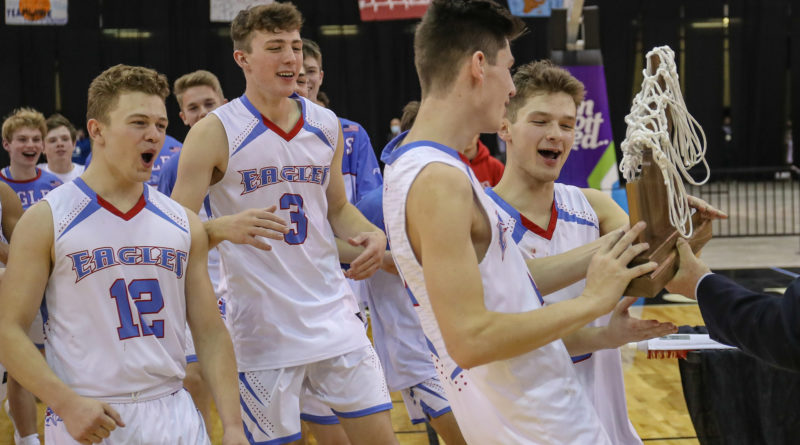 OK, maybe more than a little.

When the final buzzer sounded, the Marsh Valley High School first-year boys basketball coach raised his hand high in the air and ran circles around his team.

He then took the microphone and shouted: “This school has been waiting for one of these for a long time!”

“I caught myself off guard,” Howell said while laughing. “I all of a sudden found myself in the middle of the circle. I was an adult out there running around like I was one of the kids. It just happened because of the excitement. But these boys just bring that out in you.”

Seniors Cody Hansen and Bracken Howell, who is the son of Kent Howell’s cousin, anchored it with a combined 26 points. Hansen had 14 points and six boards. Bracken Howell was right behind with 12 points and four rebounds for the Eagles (22-6), who not that long ago had a hard time just getting to the playoffs.

But in 2019 that narrative started to change. Marsh Valley qualified for state and advanced to the semis before losing. The Eagles then returned to the postseason the following year.

However, with a first-year coach in Kent Howell, who led the baseball program to a title in 2019, Marsh Valley took that next step.

The Eagles won their final seven games of the regular season on the way to a district championship and a No. 1 ranking heading into the state tournament. Saturday was their first time playing in a final since 1995 when Kent Howell set the 3A state tournament record for the most 3-pointers in a game with seven. But more importantly, Saturday was Marsh Valley’s first title since 1988. Assistant coach Jerry Dunn played on that team.

“That was special for both of us to be a part of this one,” Kent Howell said.

The first three quarters featured eight different lead changes and three ties. But Marsh Valley was finally able to get some separation with a run late in the fourth. Clinging to a 44-43 lead with 3:50 left, the Eagles went on an 8-2 run capped by a layin from Payton Howe. It gave them a 52-45 advantage with 1:25 to play. That wasn’t the only big play the junior made down the stretch.

With Marsh Valley up 52-47 with 1:16 remaining, Hansen missed a free throw. But Howe secured the offensive board and dished it off to Bracken Howell, who was quickly fouled. Howell drained both of his free throws to extend the lead to 54-47 with 50.7 seconds left.

“That was a big board,” Bracken Howell said. “He’s not very tall, but he can jump. And that kind of sealed it I felt like.”

McCall-Donnelly (11-3) cut the deficit down to four at 54-50 on a three-point play by Isaac Speirs a few moments later. But Bracken Howell went 4 for 4 from the free throw line to bring back the long-awaited championship.

“I still can’t even wrap my head around it all,” Hansen said. “I feel really fortunate to be with these guys and be on this team at this time. I expect big things out of the younger group that we got and I think we can go get some more.”

DJ Green recorded a game-high 21 points with six rebounds for the Vandals. Speirs notched a double-double of 13 points and 13 boards for McCall-Donnelly, which in its first year in the 3A classification, advanced to the program’s first-ever title game. It didn’t even start the season until Jan. 15 due to the district’s coronavirus policy.

“… I don’t know if we could have done any better with the situation.”