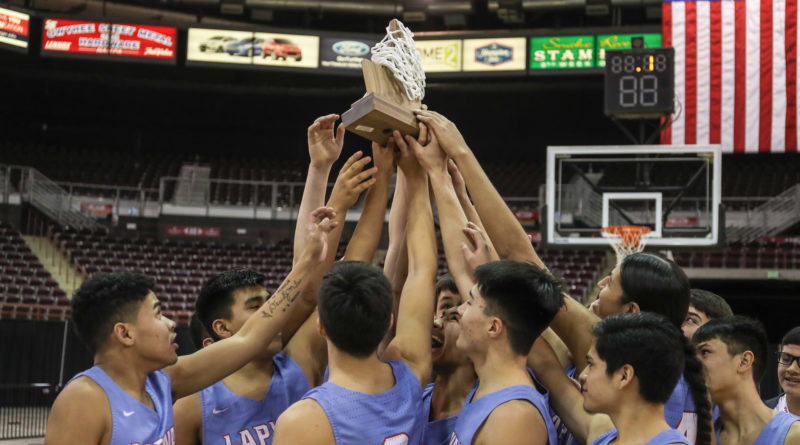 “I am supporting you, all of the nations around you are supporting you and we all want to see you do well. … Let’s go get this, go get one,” Irving said.

The Wildcats didn’t let Kyrie down.

Following consecutive third-place finishes the last two seasons, Lapwai returned to the top of the mountain for the 11th time with an 82-60 win over Riverstone in the 1A Division I State Champion game Friday at the Ford Idaho Center. It was their first championship since 2018.

“It really gave us a bunch of fuel,” junior Kross Taylor said. “With those two third-place trophies, we said, ‘We don’t want them anymore. We want the first place trophy.’”

Freshman Kase Wynott led the way with a game-high 23 points, five rebounds and three assists. Taylor was right behind with 22 points, which included seven 3-pointers, five rebounds and a pair of assists. And Terrell Ellenwood-Jones added 17 points on five 3s, and five assists for Lapwai (20-4), which received the message from the seven-time NBA All-Star on the 256-mile bus ride from Lapwai to Vallivue High School.

It all started because Irving, who is part Sioux, formed a bond with the cousin of Lapwai assistant coach John Williamson. Lapwai is the seat of government of the Nez Perce Reservation in North Central Idaho, and the Sioux and the Nez Perce used to have a connection. So Irving was told to talk to one of the people from the Nez Perce about getting the message out to Lapwai.

And since the initial message, the team has been in touch with Irving every day. The Wildcats got Irving’s personal cell phone number. They have also posted messages thanking him on their “Wildcat Highlights” Instagram page, which Irving, who has 14.3 million followers, has shared.

“It just brings more eyes to our community,” said Lapwai head coach Zachary Eastman, who hinted that there may be more to come from Irving later on. “I think our community has such a rich tradition and people around here know about Lapwai, but people in the Midwest, the East, don’t know much about Lapwai.

“So I think this just kind of helps people be aware of Native Americans and aware of where we come from and just the support that we get from everyone.”

And players said afterwards, they had already let Irving know of their latest achievement.

“He’s one of my role models too. He’s one of my favorite NBA players,” Ellenwood-Jones said. “For him to say stuff like that, it boosts my confidence. I don’t even know what else to say. My mind’s blank right now.”

But that message seemed like it was going to be a much different one early on in Friday’s game.

Lapwai nearly went down by double digits at 18-10 during  the 2:10 mark of the first quarter.

However, they not only quickly got themselves back into it, but took the lead as well thanks to the shooting of Ellenwood-Jones. The 5-foot-10 sophomore guard began the second quarter with back-to-back 3-pointers in less than a minute to give Lapwai its first lead of the game. He then went deep again with 1:45 left in the half to extend the lead to 37-29, which capped a 17-5 quarter for the Wildcats.

“Terrell is 5-foot-9, 140 pounds, and he has the biggest heart on that court,” Eastman said. “And right there, just showed how much he wanted to win.”

Ellenwood-Jones wasn’t the only one who lit it up from downtown. Lapwai used the 3-ball to push its lead in the third. After missing their first two attempts of the quarter, the Wildcats made four in a row, capped by Taylor’s, which gave them a 51-32 lead with 4:45 to play in the quarter.

Lapwai didn’t panic, though. It instead went back to old reliable. Back-to-back treys by Taylor put the lead back up to double digits at 66-52 about a minute and a half later. The Wildcats, who at their local Pi-Nee-Waus gym have an actual NBA 3-point line, didn’t let Riverstone get any closer the rest of the way.

“So from a young age, our kids are already shooting NBA 3s,” said Eastman, whose team made 14 3-pointers on the day. “So when you get to the high school 3, it’s easier.”

It was the 14th championship game appearance and the 11th title in program history – a tradition that began with the first one back in 1956. The Wildcats have done everything from three-peat (1987-89), repeat (2017-18) and win titles in three different classifications.

“Lapwai is a basketball town man,” junior Titus Yearout said. “When you put that jersey on, you go out there and play hard. State title, that’s just what people expect.”

Riverstone’s Nick Liebich recorded a double-double of 23 points and 13 rebounds. Ethan Hurt and Charlie DeBoer added 18 and 16 points, respectively for the Otters, who despite having their head coach from a year ago die over the summer – and their season initially canceled due to COVID-19 in December – still had the best season in program history. They earned both the first district title and state trophy in school history after previously only being 1-8 at state.

“It was very impressive,” said DeBoer. “We weren’t going to have a season for months, so it was awesome to even get here, top two teams in the state, that means something.”