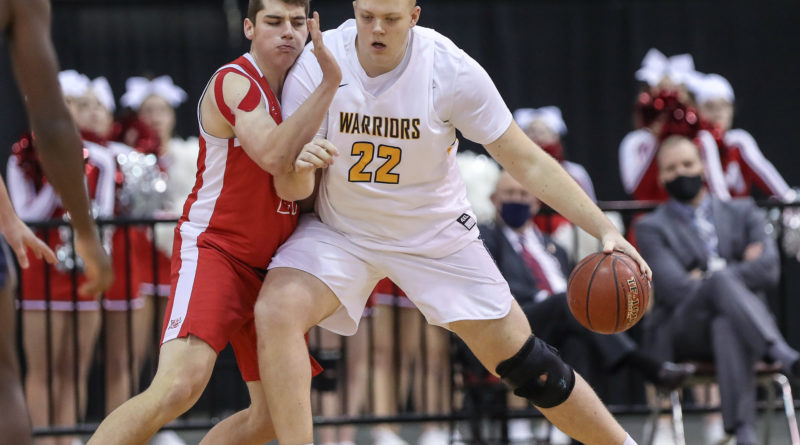 NAMPA – The celebration was rather mute considering the circumstances.

Meridian senior Brody Rowbury casually walked toward his bench and dribbled the clock out. And Meridian coach Jeff Sanor clapped like he was a spectator at a golf tournament. The only real excitement came from senior Drayson Fisher, who pumped the crowd up with his hands, after the Warriors earned their first trip to a final since 2001 after a wire-to-wire 66-56 win over Madison in the 5A State Tournament semis Friday night at the Ford Idaho Center.

“I don’t have a lot of emotion. I don’t want to sound unappreciative, but we expected this. We’ve worked for this. This championship game is the goal since I showed up,” said Sanor, who won a state title as a player for Boise High School in 1986. “So I’m proud of our guys, we’ve taken the next step that we wanted to take, and we’ve got to come back and be ready to go again tomorrow.”

Rowbury once again led the way with his second straight state tournament double-double. This one was of the 17-point, 10-board variety.

But the 6-foot-11 big man was far from the only contributor. Senior Joe Mpoyo, who talked with a scout from Wenatchee Valley College afterwards, also scored 17 points with seven rebounds. Senior McKay Anderson added 11 points. And senior Colby Homer rounded it with 11 for the Warriors, who will now try to win their first state championship since 1992.

“It’s crazy,” Anderson said. “But I’m really happy to be able to be a part of this program. It’s been an amazing ride and I’m just looking to finish out the job for all the people for us.”

Meridian got off to another great start.

It scored the game’s first six points on a jumper by Rowbury. The Warriors then rode that to a 16-4 start, capped on a putback from Mpoyo with 1:40 left in the opening quarter.

They spent the rest of the first half up double digits. Their lead grew as big as 15 at 32-17 on a layup by junior Davis Thacker with 3:01 remaining in the first half.

“Right before the game, we get ourselves all hyped up and we just come out punching,” Mpoyo said.

But it wasn’t all smooth sailing for Meridian.

Ethan Pearce, who has good size at 6-foot-4, hurt his elbow in the second quarter and didn’t come back for the rest of the game.

The Warriors also had to stave off a late charge from the Bobcats (20-5).

Madison seemed dead in the water down 46-29 midway through the third quarter. But the program showed why it has won eight state titles by going on an 11-3 run to close the gap to 51-42 at the 6:05 mark of the fourth quarter. The Bobcats got the lead all the way down to seven on three different occasions.

However, Meridian made 7 of 8 free throws down the stretch, with Rowbury going 4 for 4 from the charity stripe himself, to quell any thoughts of a Madison comeback.

“We had those moments during the season where we would play an SIC opponent, and we got everybody’s best shot,” Sanor said. “And I would go into the locker room and I said, ‘Guys, you should be thankful for this.’ Because this game and how Mountain View play(ed) us, is going to get us ready for the game that we really, really want to win. And I repeated that again in the locker room. They know what to do in difficult moments.”

Taden King racked up a game-high 21 points for the Bobcats, who will play Boise (8-7) in the third-place game at noon inside Ridgevue High School.

(All photo by Loren Orr)