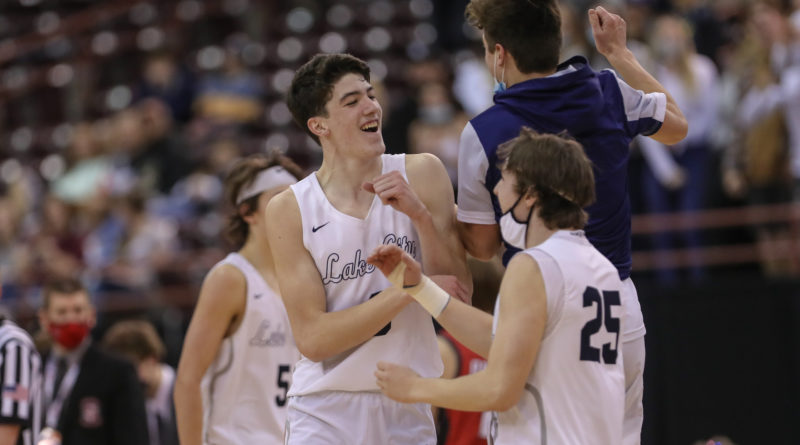 NAMPA –  Jim Winger admitted to having a lot less gray hair the last time it happened.

The Lake City School boys basketball coach is referring to the last time his team advanced to a state title game. It was back in 2002.

The Timberwolves snapped the streak with a 65-50 come-from-behind win over Boise Friday in the 5A State Tournament semis at the Ford Idaho Center.

“It’s why you do this,” Winger said. “It’s the kids’ goals and it’s an amazing feeling.”

Six-foot, nine-inch sophomore Blake Buchanan anchored it by almost recording a double-double with 19 points and nine rebounds. Fellow sophomore Kolton Mitchell added 17 with seven of those coming in the fourth quarter and Jack Kiesbuy had 13 points for the Timberwolves, who looked like they were going to have to live with the drought for another year.

The Brave (8-7) jumped out to a 14-4 lead behind back-to-back 3s from Whitt Miller midway through the opening quarter. The College of Idaho signee, who didn’t have a single field goal in his team’s opener, had eight points at that point.

Miller had 13 points in a half where Lake City trailed by double digits for most of it and was down by as many as 11 at 31-20 less than two minutes into the second quarter.

“We just missed a lot of shots that we shouldn’t have missed,” Mitchell said. “I don’t think we were that nervous. I thought we were really confident coming out. But they shot the ball extremely well. They were just beating us the first half honestly.”

But thanks to their defense, the Timberwolves turned things around in a big way.

Boise, which shot 52% from the field in the first half, saw that percentage cut by more than half in the second. The Brave only made five field goals total in the final 16 minutes. Miller, who was 5 of 6 in the first half, went 2 of 9 the rest of the way, including missing his final four shots.

“He had a great first half,” Kiesbuy said. “But we knew if we were going to win this game, we had to limit his points and that’s what we did.”

And Lake City took full advantage by tying the game at 42-42 on a Zach Johnson layin with 30 seconds left in the third quarter. Mitchell then gave the Timberwolves their first lead of the game at 44-42 a minute into the fourth quarter.

After four different lead changes less than three minutes in, Lake City took the lead for good on a layup by Chris Irvin. It kickstarted a 16-2 run over the final five minutes of the game, capped by a thunderous two-handed slam from Buchanan with 49.6 seconds to go.

“I think I said, ‘Wow,’” Winger said while laughing. “It was like, ‘Stand there and watch it. Stay out of the way and don’t screw it up. Let the horses run.’ And they did. I’m not trying to build it up or add extra juice to it, but it was impressive. It really was.”

Miller finished with a game-high 19 points and Cory Cadwell chipped in with 12 points on four 3-pointers for Boise, which will play Madison (20-5) in the third-place game at noon at Ridgevue High School.