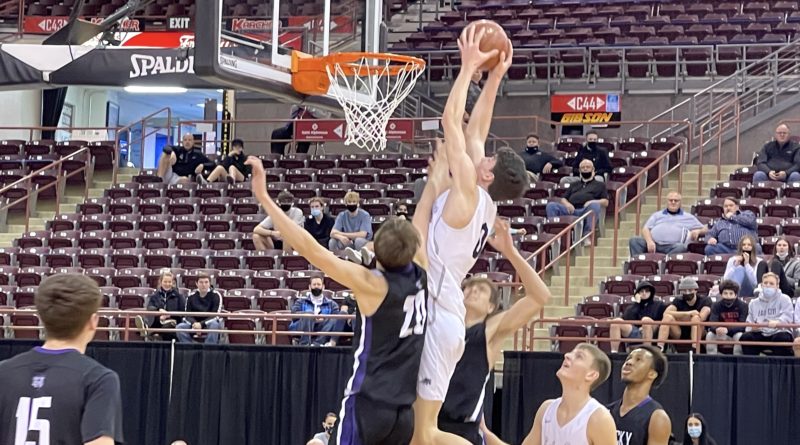 And rightly so. The Big 3 combined for 47 points in the Timberwolves’ opening round 5A State Tournament game Thursday at the Ford Idaho Center.

But it was their senior leader who delivered in the moment of truth. Jack Kiesbuy’s corner 3-pointer with 45 seconds remaining helped send them to the semis for the first time in seven years with a 65-57 win over Rocky Mountain.

“I wanted Jack to shoot it,” Lake City coach Jim Winger said. “He’s shooting an unbelievable percentage in league play from there. And he wants it. He’s leading us and he’s got that look in his eye.”

However, No. 3 Rocky Mountain (15-4) made things interesting at the end. It got itself back into the game with an 8-2 run to end the quarter that cut the deficit to 50-43 heading into the final frame.

The Grizzlies got it down to 52-48 on a jumper by Drew Fielder with 4:50 to play. But back-to-back buckets by Johnson put the lead back up to seven at 56-49 about a minute and a half later. Rocky Mountain still didn’t go away, though. Its full-court press and stifling defense dwindled Lake City’s lead all the way down to one at 58-57 following a pair of free throws by Blake Munk with 1:08 remaining.

But that’s when Kiesbuy, who hadn’t hit a field goal all half, came to the rescue.

Johnson drove the lane, passed up a good layup attempt and kicked it out to the right corner to a wide open Kiesbuy.

“I knew it was going in,” said Kiesbuy, who left his shooting hand up in the air after the release. “I’ve hit a lot of those shots before, so what’s one more?”

Rocky Mountain tried to answer one final time, but Kobe Warr’s counter 3 hit iron. Chris Irvin and Kolton Mitchell then put the game away at the charity stripe with four consecutive free throws.

Buchanan scored a game-high 19 points and nearly had a double-double in the process with eight rebounds. Johnson added 15 points, Mitchell 13 and Kiesbuy 10 in the win.

“We’re a young team,” Buchanan said. “That’s one of the best things about our team is how composed we stay and how calm we stay throughout the game. And that’s just a big part of why we win.”

Fielder and Munk led the way for the Grizzlies with 16 points apiece, while Cortez Graham chipped in with 14.