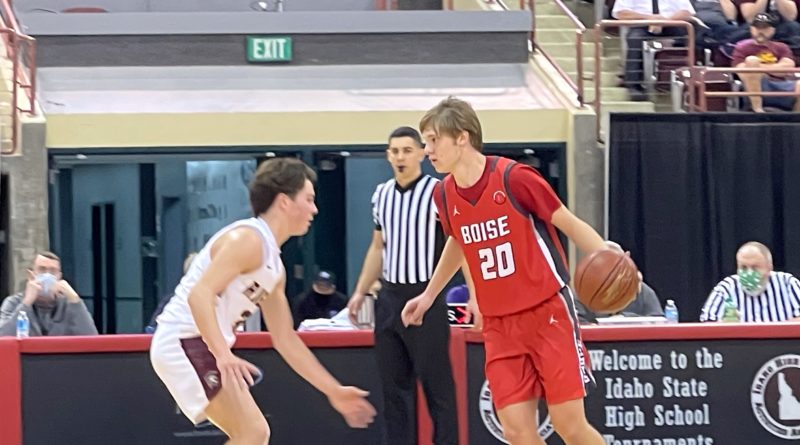 It was hard to blame the school’s Athletic Director for saying that. It has been almost a quarter of a century since the school’s last playoff win.

And the Brave obliged.

They erased a double-digit first half deficit to knock off Rigby 50-47 for their first postseason win since 1997 in the opening round of the 5A State Tournament Thursday at the Ford Idaho Center.

“It’s amazing,” senior Jack Goode said. “It’s so awesome, especially in such a weird year to bring something as awesome as that to our school. It’s a great feeling and hopefully we can get everyone excited about it and get more people out here tomorrow and hopefully Saturday.”

Boise, which was the last public school in the state to play a game (Jan. 19) due to COVID-19, and started the season 2-5, looked like it was going to have to live with the monkey on its back for another long year. It was down 23-11 with 4:20 remaining in the second quarter.

But the Brave grinded their back with a big third quarter. They outscored the Trojans 17-7 and ended the period on a 10-2 run, capped with a putback by Jack Payne with two seconds left to give them their first lead at 36-34 since the opening minutes of the first quarter.

“We just believed in ourselves,” Goode said. “We’ve had a lot of games, especially early where we were down 20-25 points at halftime and we were able to make those games close. So being down 10 didn’t seem as big of a deal.”

However, Rigby again looked like it was going to pull away after starting the final quarter with a quick 5-0 run. Boise didn’t panic, though. A pair of free throws by Jake Thompson put the Brave back in front at 46-44 with 1:09 to go.

But the Trojans answered right back in the form of a corner three by Jaboke Jones 15 seconds later. The Brave weren’t going to let that deter them, when they were this close.

“I was almost gonna take a timeout. Any other coach right there, just the way you coach the game, everyone would take a timeout. I’m like, ‘I’m going to let them play.’ And we got a layup. So it was the right call. I would have screwed it up,” said Boise coach Manny Varela while laughing.

Boise went right up the floor. Jack Payne drove the lane, faked like he was going to take a shot before dumping it to Goode. Goode then dished the ball across to Cooper Howell for a contested layin, giving Boise the lead right back at 48-47 with around 37 seconds remaining.

“Honestly, I haven’t really thought about it that much,” Howell said. “I was excited that we won. I don’t care who scored that.”

The Brave had to withstand not one, not two, but three late-game Trojan possessions. The defense held firm every time with Howell tying up Ethan Fox to force a jump ball in favor of Boise with 8.6 seconds left. So Rigby had to foul and sent Whitt Miller, who had only scored one point up until that point, to the line. The College of Idaho signee drained them both.

“Truthfully, he only wants to win,” Varela said. “He doesn’t care if he gets zero points and five assists. He’ll do whatever. He’ll guard their best guy, the tallest guy. When we went into this, we knew we have 10 games and he’s like, ‘I just want to win. I don’t care where you put me, what you have me do. You can make me bring the ball up, you can make me play on the post, I’ll do whatever it takes to win.’”

A desperation would-be 3 by Kaden Dabell fell short at the buzzer and the drought was finally over. But the Brave don’t plan on stopping there. They now plan on making their first state title game appearance since 1991.

“We’re one step closer to our goal, which is to be in that state championship game,” Howell said.

Goode tallied a team-high 15 points to go along with five rebounds. Howell had 13 points and eight boards. And Payne nearly recorded a double-double with eight points and 10 rebounds.

Dabell put up a game-high 19 points, while Taylor Freeman added 10 points for the Trojans in the loss.