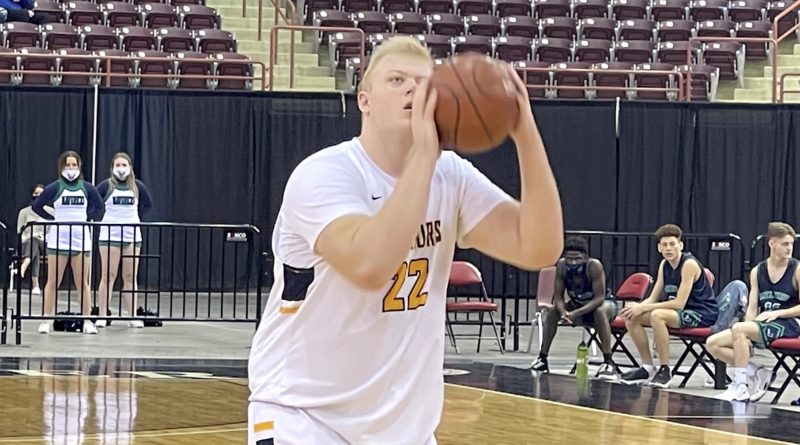 NAMPA – Brody Rowbury is a jack of all trades.

The 6-foot-11 Meridian High School senior post showed that Thursday night in his team’s opening round game in the 5A State Tournament at the Ford Idaho Center.

He came one rebound short of a double-double with a team-high 18 points and nine rebounds. Rowbury shot 70% from the field, which included even knocking down a spot-up 3-pointer.

“There’s nothing that guy can’t do,” Meridian coach Jeff Sanor said. “I keep telling myself, ‘Someday, and I only got two more chances at it, but I’m gonna call a high ball screen for him and let him run a pick and roll because he can do that too. I’m not kidding.’ He’s a really special player and worked really hard at it. People want to say he’s good because he’s big. But I tell you, he could be 6-2, and he would still be a great player.”

His efforts led to the Warriors advancing to the semifinals for the first time since 2003 after a 63-50 win over Southern Idaho Conference rival Mountain View.

Meridian will play Madison at 7 p.m. Friday in the semifinals at the Ford Idaho Center.

“It feels good man just to get a win for the school,” Rowbury said. “It’s been a long time.”

But the big man wasn’t the only player on his team to have a big night. Two others reached double figures in scoring and a third nearly did as well. Fellow seniors Joe Mpoyo and McKay Anderson had 14 and 11 points, respectively. And junior Davis Thacker added nine points for No. 1 Meridian (18-1), which cruised from start to finish.

The Warriors scored 21 first-quarter points, including the first nine of the game. Their 14-2 run in that quarter was the largest of the game. And they never let up either.

The win was just the next step in what has been a revitalization of the program. Four seasons ago, it was in the midst of another losing season. Last year, the Warriors snapped a 13-year postseason drought. And in 2021, they were the wire-to-wire No. 1 team in the state media poll and won their first district title since 2013.

Now Meridian is just one win away from their first final appearance in two decades.

“Not too long ago, Meridian was rock bottom. They would win two games the whole season,” Mpoyo said. “It just feels good to be like part of the change, part of the winning culture that my brother never got to be a part of.”

Noah White racked up a game-high 20 points for the Mavericks (10-9) in the loss.