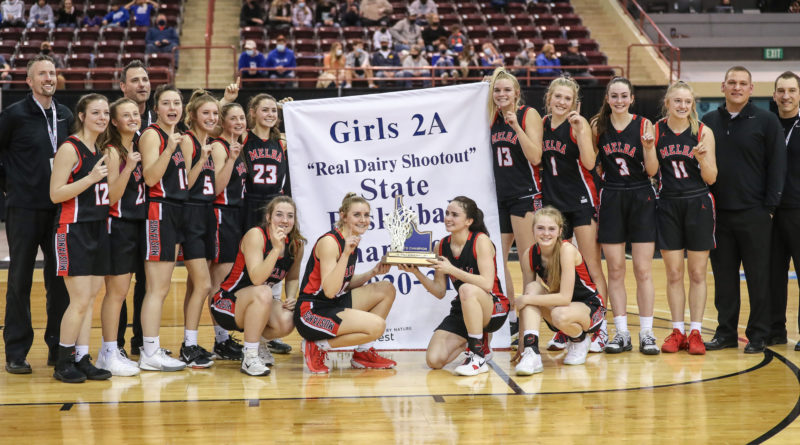 The Melba High School girls basketball senior guard, who is arguably the best player in program history, had good reason to.

After going through everything from having a potential perfect season ruined in the semifinals to getting blown out in a previous championship game, she finally won the big one in her last go-around.

Clark led the Mustangs to their first state title in school history with a team-high 17 points, including four 3-pointers, in a 51-40 win over Bear Lake in the Idaho 2A State Championship game Saturday at the Ford Idaho Center.

“There’s just nobody that works harder. She works every single day, doesn’t take a day off, she’s in the gym every weekend. So when other kids see that, they can’t slack off,” Lenz said. “She’s the calming presence on the court. Obviously, I’ve built a great relationship with her, so to see her accomplish her goals and her dreams, is everything.”

Younger sister Kendall Clark added 16 points, three rebounds and three assists for the No. 4 Mustangs (22-4), who seemed like their opportunity at a championship had passed them by. They had three future college basketball players on the roster in 2017-18 in two-time 2A Western Idaho Conference Player of the Year Kori Pentzer (Weber State), Emma Clark (Northwest Nazarene University) and Kate Clark (Northwest Nazarene University), but lost to eventual state champion Soda Springs 44-32 in the semis after previously going 23-0. Melba then made it to the state championship game the following year with Emma Clark and Kate Clark, only to lose to Soda Springs again 50-34.

By last season, the Mustangs had lost their grip on the conference. Cole Valley Christian ended their 42-game league winning streak before preventing them from claiming a fourth consecutive district title. They had to settle for a third-place trophy at state after losing to Soda Springs 49-41 following an uncharacteristic off shooting night.

And when this season came around, it was all about Cole Valley Christian. The Chargers swept the Mustangs during the regular season before handing them a 13-point defeat in the District III championship game on Feb. 11.

But Kate Clark didn’t let any of that past heartache stop her belief in a championship.

“It was something I never wanted to feel again,” Kate Clark said. “I was going to make sure that I didn’t feel it again today.”

And that’s exactly what happened.

(All photos by Loren Orr)

The Mustangs finally vanquished Soda Springs with a 42-27 first-round win before avenging an early season loss to unranked New Plymouth 46-34 in the semis. It all set up a showdown with Bear Lake (13-13), which also wasn’t supposed to be there. Its path included knocking off No. 2 Ririe and No. 3 Grangeville. The Bears were hoping to cross off another ranked team on their list.

But Melba, and especially Kate Clark, had come too far and been through too much to falter now.

The Mustangs never trailed. They used a 6-0 run in the first quarter and a stifling defense in the second – which only allowed Bear Lake to score one field goal – and forced 13 turnovers in the first half, to head into the locker room up 25-12.

Melba increased its lead to as many as 15 points and never let the Bears get closer than eight. Bear Lake hung tough in the fourth, but Brooklyn Dayley’s 3-foot jumper made it 49-37 with 1:21 remaining and all but sealed the unlikeliest of championships.

“It’s just an amazing feeling because we’re making history, the first team to ever do it at Melba,” Kendall Clark said. “I’m just really happy that I got to do it with my sister. But it was a huge team effort, and I’m really happy.”

Hailey Humpherys recorded a game-high 21 points and Kalisha Parker chipped in with 13 for the Bears, who still had one of the best seasons in program history. This was only their second postseason appearance since 2008.

And as for Kate Clark, she now leaves as a probable four-time all-conference selection, a two-time WIC Player of the Year, the school’s all-time leading scorer with 1,402 points, and the thing that matters the absolute most to her, the coveted blue trophy.