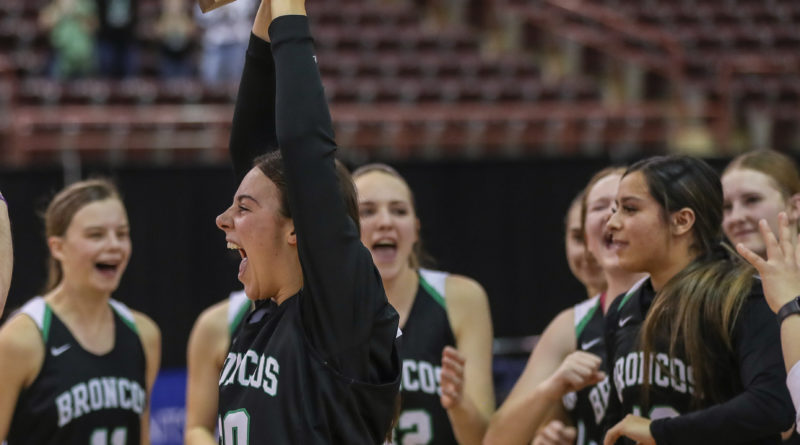 NAMPA – Raimee Odum doesn’t want to take all the credit.

But what the Blackfoot High School girls basketball coach pulled off in her first year on the job is nothing short of incredible.

Odum, who played in the Broncos’ last state championship game back in 2005, guided them to the first state title in program history with a 50-46 win over Century in the Idaho 4A State Championship game Saturday at the Ford Idaho Center.

“When I was a freshman I played with her. I already had chemistry with her. And I was so excited to tell everyone that our new coach, she was great and she was good and she knew the game of basketball,” junior Praire Caldwell said. “And everyone just kind of followed my lead and we just went out there and played with our coach, it was good.”

Odum was hired to replace Courtnie Smith, who had stepped down after five seasons to take an assistant job with Idaho State University. Odum was pregnant with her now daughter Averie, and had been out of coaching for a year to take care of her other two children, Tyus and Piper. She had previously served as the varsity assistant under Smith in 2017-18 and the junior varsity coach the following season.

And the Broncos struggled at first. They dropped two of their first three games, including a 27-point home loss to the same Century team on Nov. 16.

Blackfoot went through more adversity later in the season when it dropped the District VI championship to Skyline on Feb. 11. The loss meant it would have to take the long route to state in the play-in game against Nampa.

“I kept teaching these girls, or at least trying to help teach them that when you go through adversity, you’ve got to respond,” Odum said. “It’s not easy. You have to continue pushing forward and stepping forward.”

And that’s exactly what the Broncos did late in the state championship game.

After being down 18-16 at the break – a half they trailed for nearly all of – they came out much better in the second. Blackfoot eclipsed its first half total in the third quarter alone with 19 points to take a narrow 35-34 lead going into the final quarter. And what a final eight minutes it was. It featured two ties and five lead changes, with most of that coming in 70 seconds.

Caldwell’s running layin gave the Broncos a 42-40 advantage with 1:10 remaining. But the Diamondbacks went ahead at 43-42 on a Preslie Merrill 3-pointer at the top of the key just eight seconds later. However, Blackfoot took the lead right back at 44-43 when Caldwell sprinted right down the court and found Hadley Humpherys for an easy layin with around 50 seconds left.

But it’s what Humpherys did on the defensive end that turned the tide of the game. Playing with four fouls, the 5-foot-10 All-State junior post caused Smith to turn the ball over just moments later on a travel. That allowed Isabelle Arave to extend the lead to 46-43 on a pair of free throws with 34.5 seconds to go.

“I don’t even know,” Humpherys said about what she was thinking at that moment. “My body takes over more than my mind.

“It’s a great feeling, especially this big of a game with everybody watching from home supporting us,” Humpherys later added. “It’s unreal to even get that opportunity.”

Merrill made 1 of 2 free throws to cut the deficit down to 46-44 with 20.1 seconds left before Century was forced to foul. And Arave stepped back up to the free throw line. Only this time it was with the game on the line.

“I always dreamed of winning the state championship,” Arave said. “I was really nervous, but it was like, ‘I just gotta step up there and knock them down. I’ve done it a million times. I’ve just got to do the same thing over again.’”

And she did just that.

Arave sank both of them, giving the Broncos a two-possession lead at 48-44 with 17.3 seconds remaining.

Century’s aspirations of winning two out of three state titles were dashed for good when its next bucket didn’t come until there were 2.1 seconds left. And then by the time it fouled, there was practically nothing on the clock at 0.1 seconds. Two Caldwell free throws later, the Broncos were storming the court to celebrate the improbable championship over the team that had beaten them in the first round the last two years.

“You always wish for this. You always hope for this,” Odum said. “I knew that we had a talented group. We have a really talented group of girls. They are so good to each other. They have great relationships off the court. That’s special.”

Caldwell led the way for Blackfoot with 14 points and four assists. Humpherys was next with 12 points and five rebounds, while Esperanza Vergara rounded it out with 11 points and three steals.

Merrill had a game-high 16 points and Ashton Admson added 10 points for Century in the loss.