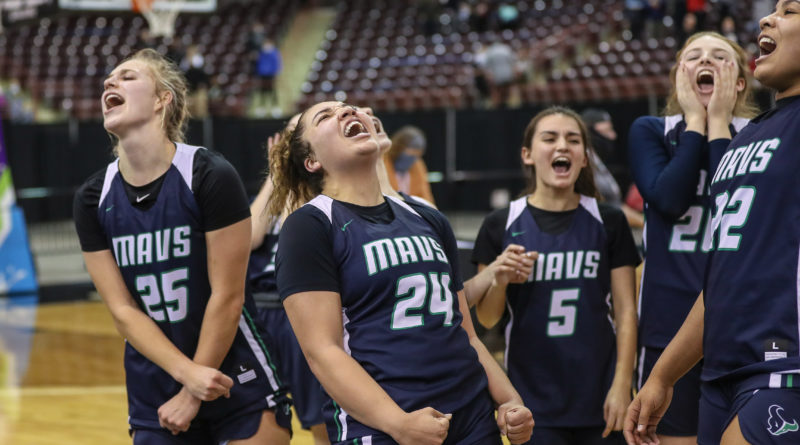 The Mountain View High School girls basketball coach’s team was being out-rebounded 30-16 and had given up 12 second-chance points. It resulted in the Mavericks being down by as many as 16 points to Thunder Ridge in the 5A State Championship Saturday night at the Ford Idaho Center.

So the 18-year coach let them have it at halftime.

“It got pretty fiery,” Skogrand said with a chuckle. “It’s like, ‘You know if you don’t want to be here, sit down by me.”

“‘We’re embarrassing ourselves,’ is what I told them,” Skogrand later added. “I said we need to start out hustling them. And so they took out that to heart.”

That they did with a 62-55 come-from-behind win over the Titans for back-to-back titles and the fourth championship in program history.

“We like to keep everybody on their toes, you know?” Mountain View senior D’Nia Williams said. “You guys think we’re going to lose. And then we’re like, ‘Nah. It was a joke.’”

But there was no joking around in the first half.

The second-ranked Mavericks (20-2) had about as bad of a first half as one can.

In addition to being owned on the boards, they were shooting 9 of 29 (31%) from the field, including 1 of 9 (11.1%) from 3-point range, had Williams in foul trouble with three and besides junior post Naya Ojukwu, no other player had more than three points.

Mountain View trailed 33-17 with 1:15 remaining in the first half – its biggest deficit of the season by far – and 33-21 at the break. So it wasn’t a pretty scene in the locker room.

“I know some of the girls were like ‘dang,’” Williams said. “Because Sko never really yells. But today she was going in on us. She was like ‘you better get your crap together and win this game.’ She was not happy, but we definitely needed it because that was a big wake up call.”

The response was a 20-2 run to end the third quarter.

Williams, who hit 10 3-pointers in a row in second-half warmups, started it with a 3-pointer that counted at the six-minute and 12-second mark. It brought Mountain View to within 10 at 38-28. Five minutes later, fellow senior guard Trinity Slocum, who was in concussion protocol earlier this week, tied the game at 38-38 with a 3 of her own. Williams then completed the seemingly insurmountable comeback at 41-38 on another trey with 1:03 left in the quarter. It was the Mavericks’ first lead since 5-2 a little more than a minute into the game. The run was capped by Slocum getting a rebound and putback off her own missed free throw to give Mountain View a 45-40 lead going into the final frame.

“I think it was the feeling of being down,” Slocum said. “Especially our captains and our veterans, we’ve won the championship game and we lost it. There’s one of those feelings we do not like. So when you’re down, all you got to do is put your heads up and put the ball in the hoop.”

But No. 4 Thunder Ridge (21-5), which was making its first-ever state championship appearance in only year three of existence, didn’t just rollover.

After the Mavericks went up by as many as 11 at 56-45 with 5:02 remaining, the Titans answered with a 9-0 run. Kennedy Stenquist’s shot from behind the arch brought them back to within two at 56-54 with about two minutes to go. However, Slocum quickly tossed the ball right down the floor to Ojukwu for the easy lay-in to put it back at a two-possession game just moments later. Slocum then extended the lead to 60-55 with 27.1 seconds remaining to basically seal the win.

The scoring quite wasn’t done there, though. Slocum picked the pocket of Thunder Ridge’s Paige Clark, sprinted down the court and dished it back over to Ojukwu for the driving layin with about 11 seconds left. The exclamation point gave Ojukwu, who has interest from UCLA, Michigan and Gonzaga, the 5A state tournament scoring record with 87 points in three games. The previous record of 85 was held by Mountain View alum Destiny Slocum, who is now playing at the University of Arkansas. She is the only McDonald’s All-American in state history.

Ojukwu didn’t even know she had broken the record until her postgame interview.

“Freshman year, that was one of my goals because I always looked up to her so much,” Ojukwu said. “Freshman year, I was like, ‘I love her, but I’m going to break her records.’”

But that’s not the only record Ojukwu came away with. She also tied the 5A tournament record with 33 made field goals. She went 33-for-52 (63.5%) and had a double-double for every game she played in, finishing with 40 rebounds.

Ojukwu wasn’t the only Mountain View player to walk away with a record. Williams’ five 3-pointers gave her 13 for the tourney, breaking the mark Eagle’s Meghan Boyd set in 2019. In total, Williams was 13-for-22 (59%) from downtown, including 5-of-8 Saturday night.

While Slocum didn’t break any records, she still leaves as one of the most decorated players in program history. She was a four-year starter, a soon-to-be four-time All-5A Southern Idaho Conference selection and the two state championships match her older sister’s Destiny in 2015 and 16. Trinity Slocum will play at the University of Hawaii in the fall.

“I just kept the legacy going, and that’s what I’m most proud about,” Slocum said. “I hope that the younger generations can keep it going, even without the last name or the number.”

Slocum, Ojukwu and Williams scored all but four of the Mavericks’ points.

Boston University signee Lauren Davenport and Sierra John both almost had double-doubles for the Titans. Davenport racked up a team-high 12 points and nine rebounds. John had nine points and 10 rebounds. Aspen Caldwell also scored in double figures for Thunder Ridge with 11 points and four rebounds.