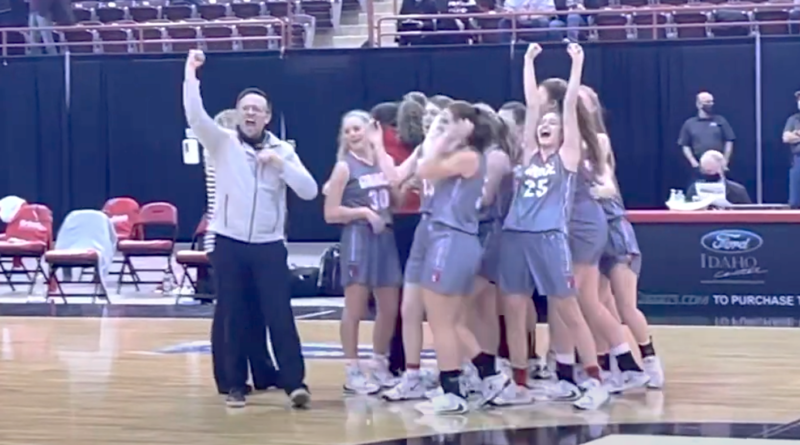 NAMPA – Kyle Christensen had one final person to thank in his postgame speech during the awards ceremony.

The Grace High School girls basketball coach looked up and pointed towards the sky and said, “This is for you, Allie.”

With his late daughter looking on from above, Christensen led the Grizzlies to their first state championship since 1986 with a 46-37 come-from-behind win over perennial power Prairie (22-4), which has played in eight of the last 10 state title games, in the Idaho 1A Division I girls basketball state championship game Friday at the Ford Idaho Center.

“It’s just surreal,” Christensen said. “I still don’t even realize that we finally got it done. This team has been resilient all year long. We’ve fought back from adversity multiple times, we’ve had a lot of close games, and the girls still bought into it. We knew Prairie was going to make runs, and the girls just kept believing and never backed down.”

Allie Lanae Christensen died on July 16, 2006 when she got tangled up in a swing set. She was just 3.

“It’s the worst thing that could happen in anybody’s life, I wouldn’t wish that on anybody,” Kyle Christensen said. “My wife’s had a really hard time knowing that she would have been on this team. But these seniors, whether Allie’s here or not, they feel like she’s been here all along.”

Allie would have been a senior on this year’s team. So her memory loomed large, especially with her younger sister Jacie being a freshman on the team this year as well. The Grizzlies (21-3) made Allie the honorary 6th man at the start of the season. They also wore ribbons in their hair and stickers on their shoes in her honor throughout the year.

“We always celebrated her playing and we’ve always said she was with us,” freshman Melodie Straatman said.

And she was again, for a championship that seemed pretty unlikely just moments earlier.

Grace hadn’t led since the six-minute and twenty-four second mark of the second quarter and was on the verge of going down double figures at 33-25 with a little more than two minutes left in the third quarter.

But then something happened. Having something more than themselves to play for, the Grizzlies fought their way back in it. They rattled off an 8-0 run to tie the game at 33-33 on a free throw by Straatman with 5:52 remaining in the game. Grace took the lead at 36-34 on free throws by Straatman two minutes later. All-State first-team player Maniah Clegg, who had been held in check for the last two quarters, then gave the Grizzlies a six-point cushion with about 90 seconds left on a pair of putback shots. It was around this time when Christensen felt it. It was the same feeling he sensed the day before in his team’s 44-36 semifinal upset over No. 1 and reigning state champion Lapwai.

“I felt that she was there,” Christensen said, choking up. “And tonight, kind of the same way. Late, maybe a minute left, it was kind of like, ‘dad, we got it.’ It was an awesome experience.”

Freshman Sydnee Smith made it official. Her corner 3-pointer put Grace up by 10 at 45-35 with 20 seconds remaining. And from there, the celebration and Allie’s lasting memory had been cemented.

“I too had a sister that passed away really young,” Clegg said. “So it’s kind of bittersweet for me as well, to be able to attribute that to people who have gone before.”

Clegg finished with a game-high 16 points and 17 rebounds. It was her third straight double-double of the tournament. Straatman added 10 points and seven rebounds for the Grizzlies, who held Prairie to just four points and no field goals for the final 10 minutes of the game.

Kristin Wemhoff and Madison Shears both totaled 10 points for the Pirates, who have now lost the last six state title games they’ve been in.