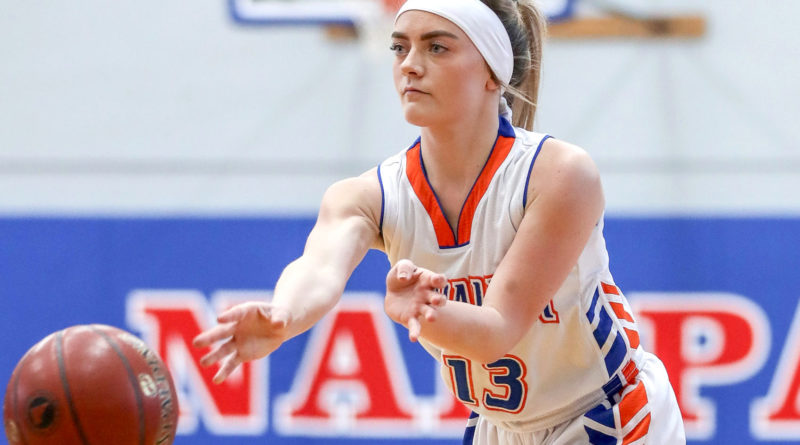 NAMPA – Tri-Valley was created by Cambridge and Midvale before the 2005-06 school year to save their respected athletic programs, who were both suffering from low participation numbers.

Sixteen years later, the move also resulted in the first championships of any kind. First volleyball in the fall, and now girls basketball.

The second-ranked Titans knocked off No. 4 Kendrick 54-48 in the 1A Division II state championship game Friday at the Ford Idaho Center for another historic feat.

“It took a second before it really hit me,” senior Emma Hollon said. “But it’s an amazing feeling, especially with such a great team that we have. It couldn’t have happened any better.”

Cambridge and Midvale were both perennial contenders in the 1980s with four combined state titles between them. Cambridge went back-to-back in 1988 and 89. But that was it – until Friday afternoon.

The long-awaited championship will allow Tri-Valley (20-3), the only permanent athletic co-op in Idaho, to finally decorate its brand new gym in Midvale. The walls as they stand right now, are just a blank, white canvas. But between this and volleyball, it should have more than enough materials to spruce up the joint with. The banner and trophy will be duplicated to allow Cambridge High to remember the accomplishments of this team as well.

“It’s been in the works since these kids were in the seventh grade,” Tri-Valley coach Jeff Springer said. “You could see it was there. The potential was there. It’s been well earned, well deserved.”

It was a season that saw the Titans go unbeaten (14-0) against 1A Division II competition, including in the Long Pin League where they haven’t lost in more than two years. They beat several higher classification teams, including Weiser, which lost in the 3A state play-in game. And their only losses were to 2A (Melba, New Plymouth) and 1A Division I (Rimrock) state qualifiers.

“It’s a dream come true,” senior Josey Jones said. “I’ve been dreaming about this since I was in junior high.”

Jones and Hollon made sure the ‘dream’ came true by combining for 36 points. Jones had a game-high 19 points. Hollon was close behind with 17 points, including four 3-pointers, two of which broke the game open in the third quarter.

After a first half that featured nine different lead changes and six ties with no team leading by more than four points, Hollon came through when her team needed it the most. The All-State first-team selection and MVP of the Long Pin League last season, broke the 29-29 halftime stalemate with back-to-back treys to begin the third quarter. Hollon ended up making four of the team’s 3-pointers and shot 50% from behind the arc. Her clutch shooting helped jumpstart a 12-2 Titans’ run over the next five and a half minutes to suddenly give them a 41-31 lead with a little more than a minute to go in the quarter.

Tri-Valley then rode its defense the rest of the way. It forced eight second-half turnovers, and a total of 18 for the game, to prevent Kendrick (20-6) from getting any closer six points the rest of the way. The orchestrator of the defensive effort was Jones, who came away with six steals herself.

“They come at the big moments. They don’t run from them,” Springer said about Jones and Hollon. “They play their best in the biggest games.”

Lauryn Mitchell added 10 boards for Tri-Valley, which is mostly made up of players from Midvale, including Jones, who has the likes of Montana Western interested in her.

“I don’t even know if we’d have a team,” said Hollon when asked where they would be if the schools weren’t combined.

Erin Morgan recorded a team-high 17 points and Harley Heimgartner chipped in 12 points for the Tigers, who had hoped to win their first state championship since 2002.