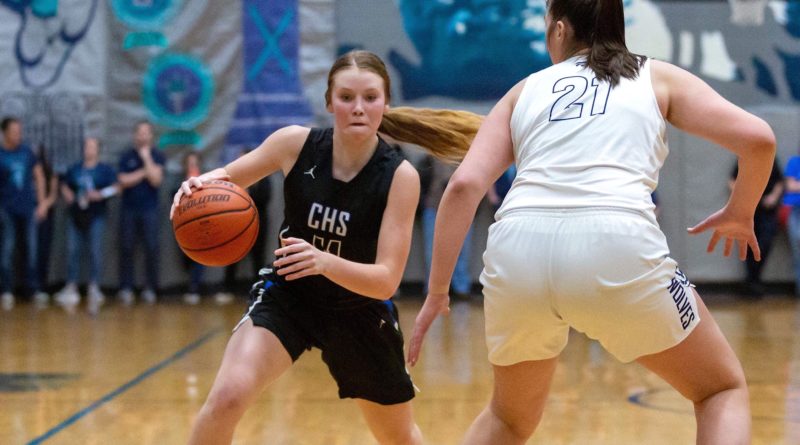 Corey and Nicole Symons have had many interesting conversations during their dinner dates over the years.

But there’s one that sticks out among the rest for the husband and wife basketball coaching duo.

They discussed needing to break the bad news about basketball and finding their daughter Madi Symons a new hobby five years ago.

The Coeur d’Alene High School sophomore wing is now the face of the No. 1 team in the state. However, that wasn’t always the case. Far from it in fact.

Symons’ journey from humble beginnings to stardom has the Vikings (18-1) on the cusp of returning to greatness as they open the 5A State Tournament against Boise at 11:30 a.m. Thursday inside the Ford Idaho Center.

“I don’t think people that are seeing her play for the first time realize it, but the people that we’ve grown up with in this community talk about it all the time,” Nicole Symons said. “It’s really like a 180 in her personality, which normally you don’t see in kids. They’re kind of who they are. But she really did just turn over a different leaf in her life.”

Madi Symons had the pedigree.

Nicole Symons won three state titles in high school — two with Coeur d’Alene (1992, ‘94) and one with Lake City (‘95). She also played collegiately at Northwest University (Oregon) along with Corey Symons, who has coached men’s basketball at North Idaho College for the last 17 years. Madi Symons was 1 when he started as an assistant before taking over the program in 2014.

“She slept in bleachers. She slept under bleachers. We’d have late shootarounds or late walkthroughs and she’d be running around until she fell asleep,” Corey Symons said. “She literally grew up in the gym.”

But none of it came natural to her.

She was timid. Her grandparents had to bribe her to play defense and foul.

She was uncoordinated. Symons struggled to grow into her body when she shot up to 6-foot in the fifth grade. It got to the point where Symons was tripping over herself on the baseline and her parents had to hire a running coach.

And Symons couldn’t make a left-handed layup for the life of her.

So the AAU team that she had played on for years, cut her in the sixth grade.

“It’s hard in the moment as a kid and a mom to accept it, but I’m glad it happened to her at a younger age where she had to figure out if this was something she wanted to do or not,” Nicole Symons said.

Madi Symons responded by hitting the weight room and working out with her father’s players. These included the likes of RayQuan Evans, the starting point guard for No. 16 Florida State, Idaho State alum Sam Dowd, whose story of overcoming homelessness received national attention and Braian Angola, who played for the Orlando Magic and is now playing professionally overseas in Israel.

“I remember one time going and watching Braian play in the NBA and he had this huge hotel room. I remember him telling me, ‘If you keep working, you can have this. But you got to work for it,’” Madi Symons said. “And that’s when I put my head down and just kept grinding.”

Symons joined the Northwest Blazers, one of the premiere club basketball teams in the country, a few short months later. And she now puts up anywhere from 500-800 shots after games.

“She’ll just stay in the gym until the janitor kicks her out,” Corey Symons said.

The work ethic extends off the court as well. Symons just recently stayed up two straight nights to study for an AP Biology final that wasn’t going to have any bearing on her final grade. She got a 99%. Symons is currently carrying a 4.3 grade-point average.

“This is Madi’s personality to a tee and the reason where she’s at today,” Corey Symons said.

Symons had another decision to make. Where she wanted to take her newfound talents to. In Coeur d’Alene, incoming freshmen get to choose whether they want to attend Lake City or Coeur ‘d’Alene High School. Lake City seemed like the obvious choice. It had made the state tournament three out of the last four years and was just coming off a state consolation championship. The Timberwolves also had future Michigan State player Brooklyn Rewers for Symons to team up with. The Vikings, on the other hand, hadn’t posted a winning season in six years. And Symons seemed like she was going to go with the logical pick. She wore Lake City gear all that summer. But then Symons changed her mind and enrolled at Coeur d’Alene at the last minute.

“All the girls at Coeur d’Alene I’ve grown up with and have been some of my best friends over the years. And just seeing what they went through, I wanted to change that,” Symons said. “I didn’t want to come into a winning program, I kind of wanted to change one and leave a legacy for the next generation.”

That’s exactly what she’s doing too.

As a freshman last season, she led the Vikings to their first District I-II championship and state appearance since 2014. Symons racked up 16.0 points and 12.0 rebounds a game that year to earn Inland Empire League Co-MVP honors with Rewers.

Symons is once again averaging a double-double at 13.5 points and 10.5 rebounds per game this season. She just flirted with a triple-double by dropping 24 points, 13 rebounds and six assists against Rewers in last week’s 55-49 district championship win over Lake City.

She received an offer from the University of Rio Grande and has interest from the likes of Wyoming, Pepperdine and Utah. It fulfilled a lifelong goal and one that seemed pretty unrealistic just a few years back.

“I think back to when she was 6 years old and she wrote on this little board in her room, all misspelled and everything, ‘I want to play college basketball,’” Corey Symons said. “That was literally the first goal she ever set in her life. I still have that board in my office.”

But it’s not just Madi Symons for the Vikings. Junior forward Skylar Burke is Coeur d’Alene’s leading scorer this year at 14.0 points to go along with 8.0 rebounds and 3.0 steals per game. While senior guards Tori Younker (9.0) and Jaelyn Brainard (8.0) are nearly averaging double figures in scoring themselves for a team that brought back its entire starting lineup from last season.

It’s all resulted in the Vikings winning all but four games by double digits. The only blemish on their record is a six-point overtime loss to No. 4 Thunder Ridge on Dec. 29. But they’ve won 10 straight games since then.

Coeur d’Alene hasn’t won anything yet, though. It knows that all too well after going two-and-out at state a year ago on a last-second shot and a 22-point loss to the same team it will face Thursday in Boise. The Vikings haven’t beaten a team from the Southern Idaho Conference, which has won five of the last six state titles, since their title run seven years ago. They will potentially have to do so three times in order to bring home another banner.

It’s a tall task. But if the last several years have proved anything, it’s that Symons is clearly up for it. And that her parents need something new to talk about at dinner.

“A lot of people didn’t want me to play with them. I was always the last pick and begging to be on their team,” Symons said. “But everything I’ve been through has been worth it. I don’t think I’d be the person I am today without it. I am a more bold, confident person than I’ve ever been and I think that’s because of all the doubt people have had.”