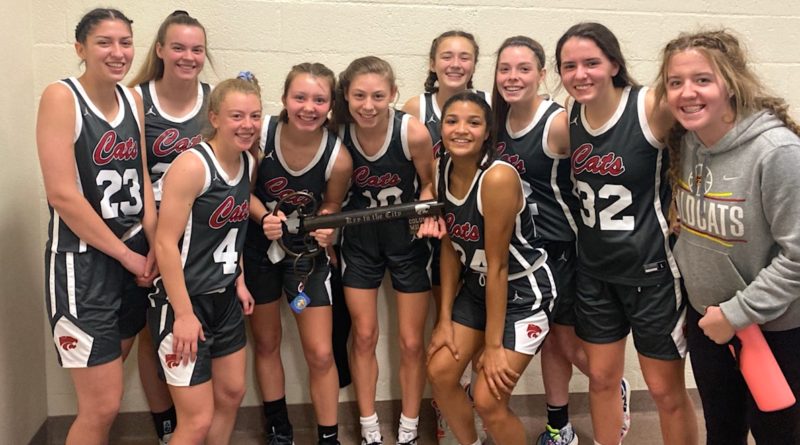 It was nothing new for the Columbia High School girls basketball coach. He had done so numerous times. But not like this.

Robertson uttered the words that no one this season thought they would hear, and ones the program had been waiting 14 long years for:

After 14 consecutive losing seasons, which featured only 36 wins since 2006, a coach abruptly stepping down, enduring a losing streak of at least 20 games on four separate occasions – including one of 42 games and seemingly everything in between – the Wildcats surprised everyone, including themselves, to punch the first ticket to state in school history.

Columbia (13-10) plays Sandpoint (11-10) at 2 p.m. Thursday in the opening round of the 4A State Tournament inside Mountain View High School.

“It was a season of a lot of firsts,” Robertson said. “We looked at it honestly, as an opportunity. Every day was an opportunity because you couldn’t get any worse. So you can only go uphill. And so, from the beginning, it was, ‘OK, how do we establish a tradition of competing?’ It wasn’t necessarily going out and winning ball games. It was how do we get to a point where we’re gaining the respect of the fans, gaining the respect of the teams, the other schools, our students, everybody?”

And it took even longer to do.

Robertson walked into a much different locker room just two seasons earlier. The same one that four other coaches had come into as well with little to no results.

Brian Thompson was the first coach in program history when Columbia first opened its doors in the fall of 2006. He lost his first 40 games and didn’t get his first win until Jan. 24, 2008 against Kuna. Thompson only won two other games before departing after the 2009-10 season.

Driggs Jessup then took over and had been on the job for all but a few weeks when Columbia suffered its 42nd straight loss on Dec. 4, 2010. Driggs went just 17-60 in his four-year tenure,  but did get the Wildcats to win back-to-back games for the first time on Jan. 23, 2013, and at the 5A level, guided them to the previous best season in school history at 9-13 before leaving in 2014.

Kiester won six games her first year before a pair of one-win seasons, including 2017-18 when the lone victory was against the Skyview junior varsity team. She abruptly resigned seven games into the 2018-19 campaign, handing the reins over to Robertson, who was in his first year with the program as an assistant.

Robertson had spent the last four seasons with the Columbia boys team. He was the acting coach when the Wildcats snapped the infamous 45-game losing streak, which spanned three years, in a 45-31 win over Nampa on Jan. 30, 2017. Robertson transitioned over at the request of Kiester and because his daughter, Lexi, had just entered the program.

Columbia went 2-12 the rest of that season before going 5-18 last year when it scored just 34.0 points per game on 13% shooting from the field.

“We got tired of hearing, ‘You guys play super hard.’ It almost got to the point where it was a negative thing to me,” Robertson said. “That meant that our kids weren’t good enough to compete at that level. And that ticked me off.”

As did seeing the other coaches in the 4A Southern Idaho Conference pick them to finish seventh out of eight teams. A catastrophic injury to his daughter Lexi, who blew out her knee for the second straight year with another torn ACL, didn’t help matters either.

And Columbia lived up to its reputation in the beginning.

The Wildcats started 5-7 with losses to 3A schools like Fruitland, which didn’t even make state, and suffered a 55-point blowout loss to Mountain View, which was reminiscent of years past like losing by an average of 32.3 points during the 2014-15 season.

“Growing up, my parents would take my sister and I to games and kind of teach us to learn from it,” said sophomore post Mylie Mills, whose twin sister Maggie is also on the team. “It gave us that attitude of, ‘We want to be the ones to try and turn this around,’ which is something that a lot of girls on this team share.”

And that’s exactly what they did with a 45-37 win over Caldwell on Jan. 19. The Cougars were the reigning district champions who had played for a state championship just two years earlier. It was the first time Columbia had beaten them in seven years. The victory also jumpstarted a four-game winning streak — a first. Columbia’s best winning streak previously was two games, which it had only ever done six times before. The Wildcats followed that up by beating perennial power Bishop Kelly for the first time ever on Jan. 29.

“That was a game where I think all of us were just like, ‘We’re done being that team. We’re gonna take it to teams that are supposed to be way better than us,” senior Sage Myers said.

They ended the regular season winning six out of their final eight games to earn the No. 3 seed at the District III Tournament.

The program still had to prove it when it mattered most, though. That day came in the winner-to-state district semifinal game against Bishop Kelly on Feb. 9. Five weeks earlier, the Wildcats entered that same locker room after a 52-36 loss to the Knights.

It was a much different feeling this time around.

Columbia knocked off Bishop Kelly 40-29 to do what seemed impossible not that long ago — qualify for state.

The team blared songs like “We Are the Champions” before Robertson walked in with those magical words.

“It was a sense of relief,” Robertson said. “For those girls to pull that off at BK, I remember I just threw my hands up. For so many years, they were getting blasted by 40 points, so just to see them be the team on top and achieve something they never thought they’d be able to achieve, it was pretty indescribable.”

The Wildcats will have their hands full in a pretty loaded field with the likes of top-ranked Middleton, which just beat them for the District III championship, as well as last year’s state runner-up Century and a Burley squad with Division I prospect Amari Whiting.

But they’ve been through much worse.

“We don’t want to settle,” senior Mia Nottingham said. “That’s the one thing that many teams in our position have done in the past. They’re so excited to be there for the sweatshirts and all that stuff, that they forget why they’re there in the first place. I know even our boys team when they went to state for the first time, they settled. I don’t want us girls to do that. I want us to go out, get a metal, get a trophy, anything. Just know that we played till the end.”

No matter what happens, though, it will still be a year to remember, one that included the first winning season, the first district championship game appearance, the first time having a player average double figures in scoring — and it had two with Nottingham (10.7) and Ellie Robertson (10.3)  — and the first time having multiple all-league players in the same season with four.

“I actually didn’t know any of that,” said freshman Ellie Robertson while laughing. “But wow, with everything we did this season, this is our best season ever and this is just the beginning.”