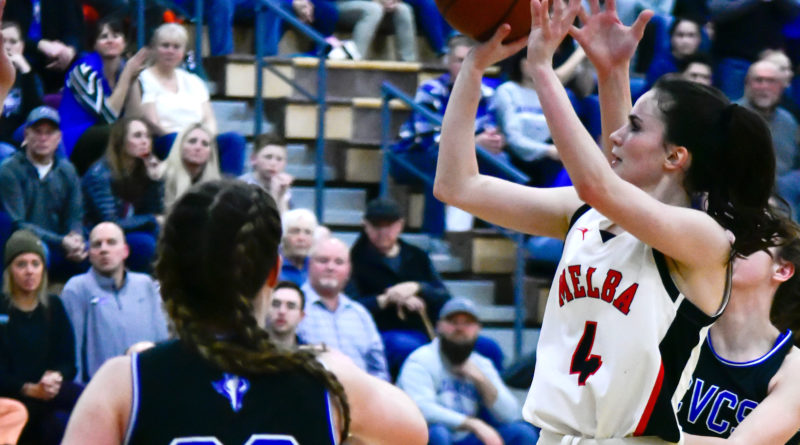 Here is an inside look at the Top 20 players in Class 2A Idaho high school girls basketball.

There are dozens of standout 2A girls basketball players in Idaho and these lists are not intended to be comprehensive. DM or tag us on Twitter or Instagram @sbliveid and let us know about players worthy of fans’ attention in 2020-21.

Barger has been the go-to player for the Bulldogs from day one. She led them in points (10.8) and field goal percentage (47.2) her freshman year. And since then, All-State, Central Idaho Conference MVP and All-League honors have all followed. She was even nominated for the Northwest Female Player of the Year Award. And even more accolades should come her way this season. Barger is leading the team in scoring — yet again — at 14.1 points per game on almost 50% shooting. She is also nearly automatic at the free throw line (88.9%) and averages 3.6 rebounds, 3.4 steals and 2.4 assists to boot.

“She doesn’t get rattled in pressure situations and she is always a teammate first and a true competitor,” Grangeville coach Michelle Barger said. “Camden is someone that you can count on playing for 40 minutes and plays on both ends of the court at an extremely high level.”

Barker didn’t end her career the way she wanted, but it was still a fine one. Her teams never had a losing season and she was a multiple-time All-League selection, including making the first-team last year. Barker’s final season saw her put up more than 11.0 points to go with 3.5 rebounds and 2.4 assists per game.

“Hailey is a gifted point guard with a high basketball IQ,” Firth coach Sharla Cook said. “She is a great shooter, defender and floor general.”

The facilitator of the Bulldogs’ dynamic backcourt — more on her counterpart in a moment — has really picked up where she left off last season when she was an All-Nuclear Conference first-team selection with 12.3 points, 4.7 rebounds, 3.4 assists and 2.9 steals per game. Her points and rebounds have taken a slight dip to 9.2 points and 3.8 rebounds, but her assists (3.5) and steals (3.0) are right in line with what she did last year, which is really what Boone is primarily asked to do.

“Sara is as dependable as you can get as a point guard and she is a very quick tough defender,” Ririe coach Jake Landon said.

New Plymouth coach Denise Oliver has seen a lot of great players come and go during her two-plus decades at the helm, but there may be none better than Christensen. And that’s with her losing an entire season with a torn ACL as a sophomore. The 6-foot-2 forward is a multiple-time All-Western Idaho Conference selection, including last season when she averaged a double-double for the season with 12.5 points and 10.4 rebounds per game. Christensen is nearly doing so again with 14.1 points and 9.2 rebounds per game. She’s also averaging 2.1 blocks per game.

“In my 21 years at New Plymouth Alyssa is the most versatile player I have ever coached,” Oliver said.

Clark entered the program four years ago with a lot to live up to. Her older sister Emma was well on her way to becoming the best player in program history. Four years later, Kate Clark arguably has that distinction now. She is the holder of several school records, including career points with more than 1,300 and counting. Clark has also been an All-2A WIC selection every year, including the Player of the Year last season, and was an All-State first-team selection with 16.2 points, 4.3 rebounds, 3.3 steals and 2.4 assists per game. She is well on her way to doing so again with 17.6 points, 5.0 rebounds, 3.8 steals and 2.3 assists per game. Clark will join her sister at Northwest Nazarene in the fall.

The youngest Clark sister may be the best of them all when it’s all said and done. The 5-foot-10 forward had quite the debut last season by pushing for a double-double average of 9.4 points and 7.9 rebounds per game. She also racked up 2.8 steals per game to earn All-WIC second-team honors. Clark looks like she will get that double-double average this year with 12.1 points and 9.3 rebounds to go along with 2.7 steals and 2.0 assists per game.

The 6-foot guard broke out in a major way last season. As only a sophomore, she guided the Chargers to their first state title game appearance in program history by averaging 11.7 points and 2.8 steals per game. Those numbers were also good enough to earn her both All-2A WIC and All-State first-team honors. She’s even better this season at 11.9 points, 4.8 rebounds, 3.6 steals and 3.3 assists per game.

“Ellie has a feel for the game that cannot be coached,” Cole Valley Christian coach Matt Beglinger said. “Her ability to navigate traffic with the dribble and the pass is second to none.”

Fuller never got to play at the state tournament, but she still had one solid career for the Pirates, capped with a senior season that saw her average almost 16.0 points and 8.0 rebounds per game. She’s surely in line for her third straight All-Conference and All-Valley selection. The Treasure Valley Community College Chukars in Ontario, Oregon want her to come play for them, and Walla Walla Community College in Washington is also interested in her services.

“Kajsia is a remarkable athlete,” West Side coach Bob Sorensen said. “From the first day I saw her in the gym, I knew she was special. As a coach, girls like Kajsia don’t come around very often and they are extremely hard to replace, but the joy of coaching someone like Kajsia is extremely gratifying.”

The Bears went to the state tournament for the first time in more than a decade last season. They even won a playoff game and played for the consolation title. A big part of that was Humpherys. The 5-foot-7 guard garnered South East Idaho Conference first-team and All-State second-team honors with 13.6 points, 2.1 steals and 1.9 steals per game. She’s averaging 13.4 points, 2.4 rebounds, 2.3 steals and 1.0 blocks a game this season.

Kingery, who was an All-WIC honorable mention selection last season, has really stepped up her game this year to become the enforcer of the top-ranked team in the state. The 5-foot-8 post is flirting with averaging a double-double for the season with 10.1 points and 8.1 rebounds per game. This is in addition to 3.4 steals per game. But her future is with volleyball. She will play for Southwestern Oregon Community College in the fall.

“You will not find a player who works harder than Desirae,” coach Matt Beglinger said. “She is a ball magnet around the rim with great timing and anticipation and very strong hands.”

Krough is arguably the most versatile player of the Chargers’ Big Four. And her stats reflect that. Krough, who earned All-WIC honors last season, is averaging 9.0 points, 4.1 rebounds, 4.1 assists and 2.5 assists per game this year.

“Lyndsie could realistically play any of the five positions, but she is a court general at heart and spends most of her time at the point,” coach Matt Beglinger said. “She has set the tone for a team that shares the ball and gives up good shots for great shots.”

Newman burst out onto the scene last year in the form of 8.4 points and 5.1 rebounds per game. It resulted in All-Conference honors. She appears on pace for that again with 9.1 points, 4.5 rebounds and 2.0 assists per game to complement the great guard play of Sara Boone and Dallas Sutton.

“Breyer is consistently very good,” coach Jake Landon said. “She is a tough player that has a great mid-range shot.”

Ortiz was well on her way to being an All-League player a year ago before tearing her ACL last January. You can hardly tell. She returned from injury in style with 13.2 points, 4.0 steals, 2.9 steals and 2.7 assists per game this season. So All-Conference honors seem well within her grasp this year.

“Yasmin is a true grit competitor (who) can hit threes, drive and score or drive and kick out and plays hard, hard defense,” Aberdeen coach Lincoln Driscoll said.

Hailey Humpherys gets the headlines, but Parker is a good player in her own right, especially on the boards. She’s averaging 11.3 rebounds per game this season. Parker is also putting up 8.1 points, 2.2 steals and 2.2 blocks per game. She should move up from the South East Idaho Conference second-team last year to the first-team in 2021.

The 5-foot-5 shooting guard has really taken command of the backcourt for the second-ranked team in the state, especially in terms of scoring. She’s averaging 12.0 points per game — 3.0 more than last season when she was picked to the All-Nuclear Conference first-team. Sutton is also averaging 3.2 steals, 2.7 rebounds and 1.9 assists per game, which is right in line with what she did last year.

“Dallas is a unique athlete,” coach Jake Landon said. “She is blazing fast and can really jump.  She is a good shooter, a good slasher and very disruptive on defense.”

If not for a shoulder injury that put Torgerson out for the final month of the 2019-20 season, who knows just how good her freshman year would have been and how far the Panthers might have gone. But she still did enough to earn All-Nuclear Conference honors. Back healthy this season, Torgerson is averaging more than 10 points and close to 6.0 rebounds per game.

“Jordyn’s knowledge and understanding of the game gives her a competitive edge over her opponents,” West Jefferson coach Jalena Dixon said. “She is a vocal leader on and off the court.”

Camden Barger’s biggest competition from repeating as Player of the Year, comes from her very own running mate in the backcourt. After earning All-Central Idaho League first-team honors a year ago, Vanderall is leading the team in rebounding (5.4) — she’s 5-foot-6 — and steals (3.9) to go along with 11.2 points per game on 45% shooting from the field.

“She is so well-rounded and an absolute joy to coach,” coach Michelle Barger said. “She is an extremely hard worker and I couldn’t be more proud of all that she has done for our program the past three years.”

If teams manage to stop Ellie Fraas, there is still Veeck to contend with. And the 5-foot-11 wing is just as good as her counterpart. She is putting up 12.3 points, 5.5 rebounds, 2.9 assists and 2.5 steals per game a year after being selected to both the All-State and All-WIC second-teams. Veeck is signed on to play for NAIA The Masters University in Santa Clarita, California.

“Anna is a natural scorer with a beautiful stroke who can do damage inside or behind the arc,” coach Matt Beglinger said. “She will not be denied with the ball in her hands.”

“Ellie has been the most dominant player,” Driscoll said. “I could dare tell you she is the best post player in the state. I know our conference teams and area teams would agree.”

He has a point.

Wilson would be the best player on a lot of other teams. But even with the 1-2 punch of the Clark sisters, she’s still managed to make a name for herself. The 5-foot-9 forward earned All-WIC honors as only a freshman last season and should do so again this year with almost 8.0 points and 7.0 rebounds per game.