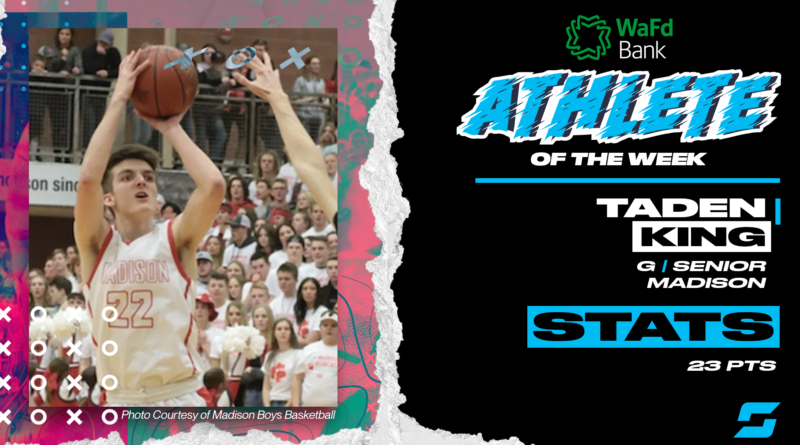 King scored 23 points, including the game-sealing free throws to beat Thunder Ridge, reports The Idaho Press. Then he erupted for a season-high 31 points in a win over Bonneville, writes the Post Register.

King ran away with this week’s honor, receiving 94.09% of the vote.

Here are the other athletes who were nominated for the week of Jan. 18-24:

Carter Bailey, Wallace: After time expired and opposing Genesis Prep was in the locker room celebrating a one-point win, a fan was given an unsportsmanlike conduct technical in the stands, granting Wallace two shots at victory. Bailey sank both and finished with 18 points in the odd-ball victory, reports The Coeur d’Alene Press.

Jason Janish, Eagle: Scored 22 points on 10 of 13 shooting in a comfortable win over Mountain View, reports The Idaho Press.

Joe Reiber, Melba: Finished with 16 points and 11 boards in a lopsided win over vision charter, reports The Idaho Press.

Jacob Ankeny, Marsing: Had 16 points, 11 rebounds and five blocked shots in a loss to Cole Valley, writes the Idaho Press.

Dylan Seeley, Idaho Falls: Scored 22 points in a win over Shelley, reports The Idaho Press. Then led all scorers with 23 points, including four 3-pointers, in a loss to Highland, writes the Post Register.

Carson Johnson, Bonneville: Scored a team-high 27 points in a loss to Madison, writes the Post-Register.

Mason Mickelson, Highland: Registered a double-double – 19 points and 14 rebounds – in a win over Idaho Falls, writes the Post Register.

Raleigh Shippen, Skyline: Had 20 points in a win over Mountain Home.

Jordan Lenz, North Fremont: The reigning 2A player of the year scored a game-high 28 points in a win over Wendell.