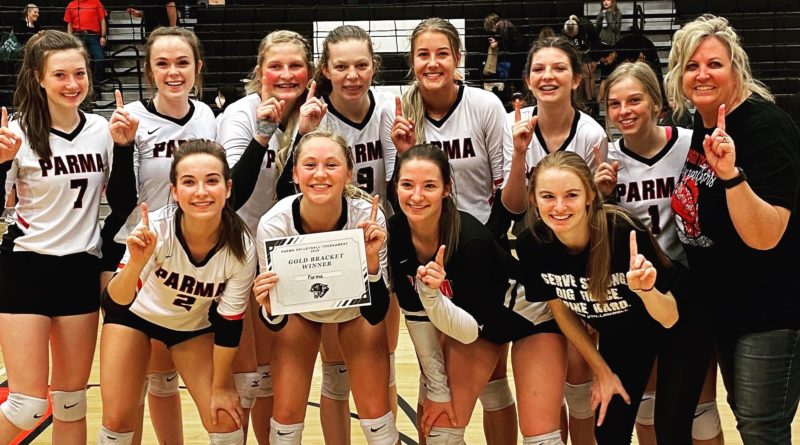 After almost 30 years of coaching, Kamille Crawford should be used to it by now.

But the Sunday after the state tournament is always the worst for the Parma High School volleyball coach.

“The reality of the season being over always hits me hard. It doesn’t matter how my teams finish, knowing our season has ended makes me sad,” Crawford’s Twitter post on Nov. 1, 2020 read.

That particular Sunday hit her hard, though.

Less than a year after being diagnosed with breast cancer, Crawford, 50, took over a program which had just eight wins the year before, and led it to the best finish in more than a decade.

“Through this whole ordeal, she can talk about me and my family and her friends and everything else, but the thing that I think helped her the most were those girls,” husband Justin Crawford said. “They helped her take her mind off of all that stuff and I think they’ll always have a special place in her heart for it.”

The news came as a shock. After just three seasons at Middleton, Crawford resigned in December 2018.

She was coming off one of the best seasons in Vikings’ history. They went 30-3, won 4A Southern Idaho Conference and District II titles and placed third at state. Crawford left with an 82-23 (.781) record.

“I think it surprised everyone,” Crawford said. “I am always really reflective about whether I should continue every season and I can’t even give it like a set reason, but I just knew that it was time to step down.”

Crawford was always vigilant with her mammograms after seeing her mother diagnosed with breast cancer in 2011. Until she wasn’t.

A technician from the Imaging Center of Idaho in Caldwell called Crawford in February 2019 for an appointment reminder. She hadn’t been in for one since 2016.

“There’s divine intervention in this,” Crawford said. “She said ‘I’m not going to hang up this phone call until you schedule a mammogram.’”

So Crawford scheduled one for April 17.

But her mood quickly changed at the follow-up appointment with her regular doctor. The doctor mentioned receiving something from the imaging center and told Crawford she had to go back in.

“As soon as she said that, I just knew,” Crawford said.

An ultrasound and a biopsy confirmed her fears.

She was diagnosed on May 2 with Invasive Ductal Carcinoma Grade 3.

“They don’t even say breast cancer,” Crawford said. “My head was just spinning.”

So much so that Crawford wasn’t able to answer any of her husband’s ensuing questions.

“I was blubbering,” Crawford said. “I actually had to call the doctor back and write everything down on a little sticky note.”

The cancer was Stage 1, on the right side and close to the chest bone and about the size of a pea.

But Crawford still went to practice that day.

It was the last one for her Idaho Crush U-16 Crawford team. Crawford coached with former Parma coach and younger sister Kandice Compas, who told her earlier that day she didn’t need to come.

“I needed to try and think about something else,” Crawford said. “I needed to be in the gym.”

It turned out to be the best place for her.

The next day was the final tournament of the season. Crawford arrived at Skyview High School in Nampa to the site of her players wearing pink scrunchies. Crawford was handed one herself, which she kept on her wrist. Compas had ordered them weeks earlier after Crawford broke down in tears on the phone with her. Compas originally called to tell Crawford of her resignation at Parma and to encourage her to apply, but the conversation steered toward the probable cancer diagnosis.

The team then broke the huddle for its first game with “Play for K!”

A chant created by her own niece Katie Compas.

“I was the one to call the cheers, so I was thinking, ‘What is something I could do to dedicate to Kamille?,’” Compas said. “And that one just came into my head. And I was like, ‘Oh this is perfect. It rhymes and everything.’”

In a field featuring several U-17 and U-18 national teams, the rallying cry carried them all the way to the championship game. The only thing standing in their way was the national Idaho Crush U-16 Team, which included a number of future Division I players and had handily beaten Crawford’s group at a previous tournament.

And on any other day, the result would have probably been the same. But not on this day.

“We all cried. It was so amazing. It was so heartfelt. It felt like nothing else mattered almost,” Compas said. “It was just us and it was just for her.”

Crawford still has that scrunchie. It rests on her car’s gear shifter, so she can always be reminded of that special moment every day.

“If you look at their athletes, we never should have won that tournament,” Crawford said. “But my kids were playing for something bigger than themselves. When I walked away from that tournament, it just gave me this strength.”

‘Strength’ she would need in the ensuing months.

Crawford had two surgeries. The first on May 29 and the second Aug. 30, which included a complete hysterectomy. And nestled in-between there were 16 radiation treatments — ones that often left Crawford exhausted with first-degree burns all over her body.

Crawford was just about done with them all in August when her right knee began to hurt. Not wanting to leave it up to ‘divine intervention’ again, she had x-rays done on both knees.

They revealed something. But the doctors weren’t quite sure what. Their best guess was another form of cancer. One that didn’t respond to treatment and the name of which Crawford can’t remember to this day.

“I must have blocked it from my mind because it was the scariest three-week period of my life,” Crawford said. “All I kept thinking was, ‘Did I really just go through all of this, only to not survive after all?’”

But the follow-up MRIs came back negative. The doctors never did determine exactly what it was. The best guess was an old, lingering injury suffered during Crawford’s playing days at Middleton and the College of Idaho.

One thing was for sure, though.

Six months after being diagnosed, Crawford had no trace of the disease following another mammogram in November.

“She was going through a hard time, but she never … sorry, I just get really emotional talking about this,” daughter Jozie Crawford said. “But she never gave up. I don’t think she knew how much it really affected me, but it affected me quite a bit. Her strength towards me and other people was amazing.”

As was her ability to get back on the court.

Kamille Crawford returned to Idaho Crush U-16 Crawford in January 2020 — eight months after her initial diagnosis, still recovering from the surgeries and on hormone blockers. They left her in so much joint pain that she was hardly able to walk much less hit balls to her team. There were several times when Crawford had to turn or walk away from her girls just to mask the pain. But she kept going.

The first game back was at the MLK Tournament in Eugene, Oregon. Her group placed inside the top-12 in the 100-plus team event. It followed that up by qualifying for one of the top club tournaments in the country in Kansas City and not dropping a single set on its way to winning a tourney in Utah before the COVID-19 pandemic canceled the rest of the season in March.

But the comeback didn’t stop there.

She applied for the Parma head coaching job at the behest of her sister and niece after the previous coach had resigned after just one season in a year where the Panthers didn’t make state for just the second time since 2007. Crawford was hired last May.

It was a familiar place for Crawford. She had coached there almost a decade earlier with great success. Crawford won a state championship in her first season in 2009 and nearly did so again in her return.

With a theme of “Stronger Together,” one which stemmed from her brush with cancer, Crawford turned a “rebuilding job” into one of the best seasons in program history.

The Panthers dropped just two sets on their way to an 8-0 start, which included a win over 4A Vallivue. They finished 21-2 with their only losses coming to state champion Sugar-Salem and 3A Snake River Valley Conference rival Fruitland. Parma did beat Fruitland three straight times to end the season, including for both the 3A District III championship and for third-place at state.

However, the most meaningful win of the season for Crawford came in a rather meaningless game just weeks earlier on Oct. 13.

It was the second-to-last regular season game for the Panthers. They had the SRV title all but wrapped up and their opponent was McCall-Donnelly — a team which hadn’t won a game in league play all season. Parma won in a sweep 3-0.

But the real story was what happened beforehand.

It was the Panthers’ annual Dig Pink Night, which honored those affected by breast cancer.

Players wore pink ribbons and Crawford asked anyone in attendance who had been touched by breast cancer to stand.

“I was surprised with how many people stood up,” Crawford said.

They received pink roses from the players and the pre-game ceremony was done. Or so Crawford thought. Just as she turned to pick up her clipboard, captains Maggie Shaw and Katie Compas grabbed the microphone. They spoke about Crawford’s own battle with breast cancer and her own bouquet of flowers and a quilt which included all of her players’ handprints and their names next to them.

“This season was exactly what my soul needed,” Crawford said. “There is a part of me that felt like cancer stole something from me that I could never get back, like I could never be the person I was before cancer. The physical, mental and emotional toll it took on me was so hard and very few people knew the extent of it all.

“But I have realized after this season that even though it might have taken a lot from me, it also gave me so much. It gave me a greater appreciation for every moment. I am blessed to be alive. I can honestly say that because of what I faced, I truly enjoyed every single moment of the season. I’m tearing up just thinking about it.”

Not because the magical season was over.

Not because she already missed the girls.

Both of which were true.

Because it was a day she could have very easily missed out on altogether.

“I didn’t know how much I needed this season until I had it. It was the best medicine I could get.”

(All photos courtesy of Kamille Crawford)