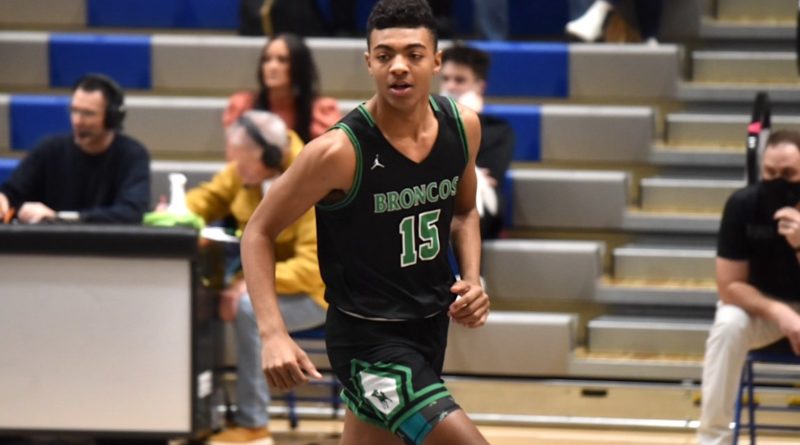 Over the next several weeks, we will be taking a closer look at the top high school basketball players in Idaho, for each classification.

TOP 25 PLAYERS IN 4A BOYS BASKETBALL

A bouncy 6-foot-7 wing/forward, Alexander is having a breakthrough senior season for Columbia. He leads the team in nearly every statistical category, including points (20 per game), rebounds (nine), assists (three), steals (two) and blocks (two). “Jaylen is a phenomenal athlete that really does it all,” Wildcats head coach Trevor Morris said. “He is a player of the year candidate.”

The 6-foot Bethel is a true pass-first point guard with excellent court vision and a high basketball IQ. He also can score at all three levels when needed. Bethel was a third-team all-Great Basin selection last season and is averaging 12.4 points, 6.6 assists, 4.1 rebounds and 3.6 steals per game as a junior. “With Brandon, it’s like having a coach on the court with his ability to recognize what defenses are doing and what plays to run,” Tigers head coach Brion Bethel said. “He is also a quick, smart and physical defensive player.”

It’s been a smooth transition to high school basketball for Bowie, a freshman guard who can play the point or off ball. He scored 29 points in Pocatello’s second game of the season against Canyon Ridge and netted 35 later in December against Bonneville. Bowie is averaging 15.1 points, 5.4 rebounds and three assists per game while shooting 39 percent from three-point range. “Julian shoots the ball really well from three and has really good range,” Indians head coach Joseph Green said. “He also sees the floor well.”

Another standout underclassman, Cook stands just 5-foot-8 but made the varsity team as a freshman. He is a heady point guard with excellent awareness and vision. In Jerome’s season opener against state title contender Century, Cook put up 30 points in a 68-62 loss. The sophomore is averaging 19.1 points, 4.1 assists, 3.6 rebounds and three steals per game. “Cook is a knock-down shooter from the perimeter, and he is a threat anytime he attacks off the dribble,” Tigers head coach Joe Messick said. “Cook does a great job of distributing the ball and finding his teammates and he is also an exceptional defender.”

Cowdery led Middleton in scoring last season at the district and state tournaments, helping the Vikings place third in the state. He had hernia surgery at the end of football season and recently made his return to the basketball court. In a late-December game against reigning 4A champion Preston, Cowdery scored 15 points in a 61-52 victory. “Cash is one of the best scorers in the state and can guard multiple positions,” Middleton head coach Andy Harrington said. “He is flying under the radar because he has been out.”

Just like Cowdery, Foote missed a large portion of Middleton’s early slate while recovering from a football injury. Vikings head coach Andy Harrington said Foote is working his way back into rhythm, but the 6-foot guard is still a lock-down one-on-one defender. Foote was a second-team all-Southern Idaho Conference selection as a junior. “Merit led our conference in assists last year but has taken on a larger role playing off the ball as a two-guard this year so we can keep him more fresh to make plays all over the court,” Harrington said.

Son of former Gonzaga star Dale Haaland, the 6-foot-8 Noah Haaland is one of the top big men prospects in the state. He was an all-Inland Empire selection as a junior and is averaging around 15 points and 10 rebounds per game as a senior.

One of the only returnees from Preston’s 2020 4A title team, Hammons is a strong outside shooter who is a key piece of the offense as a senior. The Indians have claimed four of the past five state titles.

At 6-foot-2 and 190 pounds, Holt is a big guard who can score from anywhere on the court. He averaged 11.8 points, three rebounds and 2.3 assists per game last season en route to receiving honorable mention all-Great Basin. He’s increased his numbers to 15.9 points, 5.3 rebounds and 2.3 assists as a senior. “He is big for a guard, so he can score with his back to the basket,” Diamondbacks head coach Ryan Frost said. “He is a great shooter as well.”

Johnson is asked to do a lot for Bonneville, and the senior guard usually comes through. He is averaging 20.6 points, five assists, three rebounds and 1.8 steals per game while playing 30 minutes per night and often guarding the opposing team’s best shooter. The 5-foot-11 guard was a first-team all-High Country pick as a junior. “Carson has a motor that never stops,” Bees head coach John Tucker said. “He is always moving, leading, talking, creating. He is what makes our team go. At 5-11, he takes a mugging every night, but continually performs.”

Keller was an impact player as a freshman, earning honorable mention all-Southern Idaho recognition. The 6-foot guard is averaging 12 points and four rebounds per game this season for Columbia. “His biggest strength is his consistency and his maturity on the court,” Wildcats head coach Trevor Morris said. “For being a sophomore, he plays the game extremely under control and always seems to know what decision to be making.”

A strong outside shooter, Kesler was a second-team all-High Country pick as a sophomore. Knights head coach Dave Austin said Kesler is a leader both vocally and by example who will do whatever it takes to win. He is averaging 13.5 points, 3.8 rebounds, 3.4 assists and 1.3 steals per game with a 3.9 assists-to-turnover ratio. “Most people think that all Cooper can do is shoot, but he is a true scorer,” Austin said. “Cooper finds many different ways to score and is also very team-oriented.”

A versatile sophomore who stands 6-foot-5, King can shoot from beyond the three-point line, post up and handle the ball like a point guard. He is averaging 10 points 5.7 rebounds, 2.1 steals and 1.8 assists per game. “He is very quick-footed and an excellent on-ball and post defender,” Broncos head coach Clint Arave said. “He has good vision and is a great finisher around the basket.”

Kitchell is a 6-foot-4 senior who can guard and play any position on the court. As a junior, he averaged 12.5 points per game and was voted second-team all-state as Moscow reached the 4A state championship game.

Layton is a physical and an athletic guard who plays much bigger than his 6-foot-2 frame. He has developed into a three-point threat and is a standout defender. Layton is the team’s leading scorer at 12.3 points per game while averaging 4.4 rebounds and 1.7 assists. “He can guard big posts on the block with his strength,” Broncos head coach Clint Arave said. “He is also a very skilled ball-handler and attacks the rim well.”

A third-team all-Great Basin selection as a sophomore, Lloyd is a dangerous offensive player who can score inside and out. At 6-foot-3, he creates matchup problems with his size and athleticism. Lloyd scored 33 points in an early-season win over Buhl and is averaging 17.6 points, 6.1 rebounds and 1.4 assists per game. “Michael is shooting 49 percent from the field this season and his ability to consistently hit the open shot has made him tough to guard,” Tigers head coach Joe Messick said. “Michael also does a great job on the defensive end.”

Marlow was a 4A first-team all-state football selection in the fall, passing for 2,180 yards and 35 touchdowns as Skyline won the state title. The 6-foot-2 guard also is a standout basketball player who earned second-team all-High Country honors as a junior.

Martinez is a 6-foot scoring guard who has improved his outside shot and excels at finishing inside. He was a second-team all-Southern Idaho Conference selection last season and is averaging 18 points per game as a junior. “Jacob is a natural leader on the court who is always looking to make his teammates better,” Falcons head coach Mario Betancourt said.

McCarthy played football for the first time as a senior and received all-Southern Conference honorable mention as a defensive back. He is Bishop Kelly’s leading scorer on the basketball court, averaging 15 points, three assists and two steals per game while shooting 40 percent from three-point range. “He came up on our team from deep on the bench last year to be a leader and starter,” Knights head coach Ryan Kerns said. “He is a great athlete, teammate, competitor, and is a leader on our team in hustle.”

A first-team all-Southern Idaho selection as a sophomore, Medaris is a rangy 6-foot-7 matchup nightmare with the ability to post up and knock down jump shots. He is averaging 19.3 points, eight rebounds, 1.9 assists and one block per game and shooting 67 percent from inside the arc while averaging nearly seven free throw attempts per game. “When in transition, he is a lethal scorer,” Vikings head coach Andy Harrington said. “Tyler can guard all five positions and is the leader of our basketball team as a junior.”

An all-Southern Idaho Conference football player, Morales slimmed down from 260 pounds early in his high school career to his current weight of 195. The 6-foot interior player received all-SIC honorable mention as a sophomore and recently had 27 points and 12 rebounds in a loss to Skyview. “He is a post player in a guard’s body,” Cougars head coach Derrick Boles said. “He’s a great team player and wants to win.”

Roos made the varsity team as a freshman and was Sandpoint’s best plus-minus player, averaging six points per game and ranking second on the team in rebounds. He is putting up 10 points and eight rebounds per game as a sophomore and is the Bulldogs’ top defender. “Although we have a very young and inexperienced team, he has taken a leadership role and set a great example for others with his work ethic,” Sandpoint head coach Wade Engelson said. “Colin is an outstanding athlete, an excellent teammate and a very nice young man. He has a bright future in basketball.”

A 6-foot-1 guard, Seay is a strong two-way player with an excellent outside shot. He was an all-Inland Empire selection as a junior and is one of Lakeland’s four returning starters.

Trenkle is a power guard who can score at all three levels. The 6-foot 1 sophomore, who holds a Division I offer from Louisiana-Monroe, also is an excellent rebounder for his size. He was a third-team all-Great Basin pick last season and is averaging 18.2 points, 7.5 rebounds, 3.1 assists and three steals per game as a sophomore. “He’s a pass-first guard that has adapted to a role as a scorer very well,” Spartans head coach Brady Trenkle said. “He’s a lefty that can drive and do things with his right hand just as good as his left hand.”

Williams, also a star on the diamond for Emmett, is a versatile basketball player who is having a strong senior season. The Big Bend Community College baseball commit is putting up 19.3 points, 6.7 rebounds, 1.7 assists, two steals and one block per game. “He is an incredible athlete … who can handle the ball, rebound, and is one of our two best defenders,” Huskies head coach Scott Kern said.