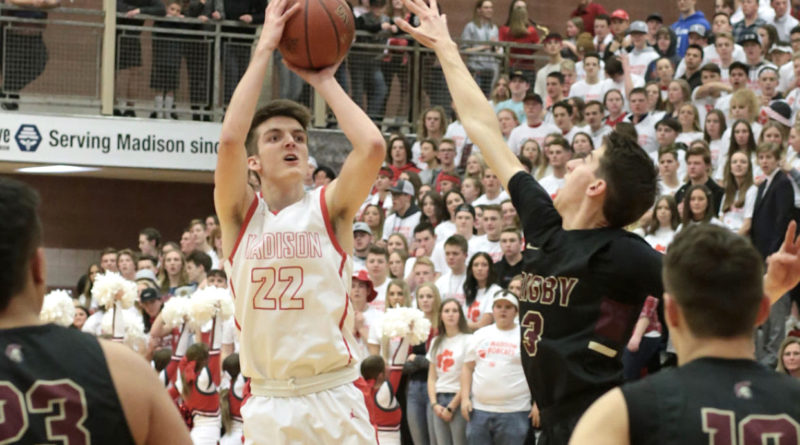 Over the next several weeks, we will be taking a closer look at the top high school basketball players in Idaho, for each classification.

TOP 25 PLAYERS IN 5A BOYS BASKETBALL

Austin is a well-built (6-foot-2, 175 pounds) point guard who can score, pass, rebound and defend. As a junior, he averaged 16.9 points, 5.9 rebounds, 2.8 assists and 2.4 steals per game and was a 4A second-team all-state selection as Kuna qualified for the state tournament. Austin also is a star quarterback who signed with Division I Montana State in December.

“Sean is a great high school athlete,” Kavemen head coach Peter Longgood said. “In addition to being talented, he is a great leader and communicator and nobody works harder than he does on the floor.”

Bergersen received honorable mention all-Southern Idaho a season ago as Borah earned its second consecutive state title. The 6-foot guard made the varsity team as a freshman and averaged eight points and five assists per game last season on a team with Idaho Gatorade Player of the Year Austin Bolt, who is now a tight end for Boise State. Ray Ray is the son of former Boise State star Roberto Bergersen.

“Ray is a relentless defender and consummate point guard,” Lions head coach Jeremy Dennis said. “He can distribute, shoot it, and attack the rim.”

Son of longtime Idaho volleyball coach Debbie Buchanan, Blake Buchanan is a two-way force as a sophomore. The 6-foot-9 Buchanan possesses perimeter skills and is a dangerous shot blocker in the paint. He averaged 11 points and nine rebounds per game as a freshman at Moscow before transferring to Lake City.

“He gets better every week,” Timberwolves head coach Jim Winger said. “He’s very good in the paint and a skilled rebounder and shot blocker.”

Cherry is a pure scoring guard who led the Southern Idaho Conference in three-pointers last season. He was 45 of 112 (40.2 percent) from long range and averaged 8.9 points per game, receiving all-conference honorable mention. In the fall, Cherry was a first-team all-SIC selection at defensive back.

“Nate has a quick release and soft touch around the rim,” Eagles head coach Scott Moore said. “He’s a catch-and-shoot type of scorer primarily but can score off the dribble as well. He’s also a tenacious defender and loves to play on both sides of the court.”

Though undersized at 5-foot-10, Dabell is a prolific scorer and solid all-around player for the Trojans. In an early-season matchup with Post Falls, Dabell had 32 points and made the winning free throws in a 71-70 victory.

A two-time second-team all-High Country honoree, Driggs is an all-around guard who is making the most of his senior season. Through eight games, the 5-foot-11 Driggs was averaging 25 points, 3.3 rebounds, 2.7 assists and 2.2 steals while shooting 60 percent from three-point range. Titans head coach Lee Toldson said Driggs has a knack for getting his shot over longer defenders.

“Lloyer is an outstanding player and an extremely hard worker,” Toldson added. “He’s a very good on/off-ball defender, great finisher, and his biggest strength is his mid-range and three-point shooting.”

“George is an old-school, back-to-basket post player that is great scoring with both hands with a variety of moves,” Ulrich said.

Hansen, an all-Southern Idaho honorable mention recipient last year, is missing his senior season because of a knee injury. He was slated to be a four-year varsity point guard for Rocky Mountain. A true floor general, Hansen possesses a high basketball IQ with excellent vision and athleticism.

“His biggest strength is his ability to make everyone around him better,” Grizzlies head coach Dane Roy said. “I believe he would have been the state player of the year, and in an increasingly difficult year for high school seniors in recruiting, I also believe he would have had some big-time offers. The college that ends up with Jaden Hansen is going to get a winner.”

Horning is a versatile interior player who has started since his sophomore season. He is a two-time all-Inland Empire selection and led Post Falls in scoring last season with 14.1 points per game as the Trojans made it to the state championship game. Horning can beat larger defenders off the dribble and score over smaller defenders at the rim.

“Alex is an extremely hard worker in and around the paint,” Trojans head coach Mike McLean said. “He is a very good scorer near the basket and can finish with either hand. He’s a matchup problem for other teams.”

Quarterback of the school’s football team, Johnson is a lightning-fast guard who can do a little of everything on the basketball court. Through eight games this season, Johnson was averaging 12 points, three rebounds, two assists and one steal.

“Tao is already getting looks from Division I schools,” Titans head coach Lee Toldson said. “He has a very high IQ, is very athletic, can play multiple positions, is a great defender and very good at getting to the basket and creating for others.”

Standing 6-foot-6 with long arms, Kiesbuy is a versatile wing who excels on both ends of the court. He is a two-time first-team all-Inland Empire selection and was Lake City’s team MVP for the 2018-19 season. As a junior, Kiesbuy averaged 12 points per game.

“He is a great passer and playmaker,” Timberwolves head coach Jim Winger said.

One of the top players in East Idaho, King is a dangerous offensive player who can score and distribute. He was a first-team all-High Country selection as a junior and is leading Madison through the early portion of the 2020-21 season in scoring (19.5 points per game) and assists (4.8) while averaging 5.9 rebounds per game.

“Taden is a fantastic basketball player and he is an even better young man,” Bobcats head coach Travis Schwab said. “He is a great leader for our team and is one of our two team captains. He’s a great coach on the floor for our team.”

“Cooper is a three-point shooter who finishes well around the basket and has some shiftiness to him this season,” Noble said. “With the ball in his hands, he is a pretty good playmaker for his teammates.”

McKarcher is a strong two-way player in Lewiston’s backcourt. He has been on varsity since he was a freshman and was averaging 11.5 points and 3.4 assists per game through the early portion of the 2020-21 season.

A second-team all-state selection as a junior, McLean averaged 12.9 points, 3.4 rebounds and 2.4 assists last season and was an Inland Empire co-player of the year. He is one of the state’s most dangerous shooters, draining 62 three-pointers as a sophomore and 75 more last winter. He is a career 37.9 percent shooter from three-point range.

“Caden is an elite shooter with a quick release,” Trojans head coach Mike McLean said. “He has the footwork to come off screens and get his shot off beyond the college line.”

One of the state’s best passers, Miller led the Southern Idaho Conference in assists per game (6.1) as a junior while also averaging 12.3 points and 2.3 steals. He was voted second-team all-SIC and committed to The College of Idaho in October. Miller is a complete guard who can shoot, defend and control the game.

“Whitt is a tremendous leader who brings years of experience to our team,” Brave head coach Manny Varela said. “He has an amazing ability to see the floor.”

One of the state’s top sophomores, Mitchell is a dynamic guard who can score at all levels. He was Lake City’s team MVP as a freshman, averaging 11 points per game while earning first-team all-Inland Empire honors. Through the early portion of the 2020-21 season, Mitchell has increased his scoring average to 18 points per game.

A big guard with excellent two-way skills, the 6-foot-4 Mpoyo averaged 9.4 points per game and shot 43 percent from three-point range (32 of 74) as a junior in earning all-Southern Idaho honorable mention. Mpoyo also uses his length and athleticism to be a nuisance on defense.

“Joe’s biggest strength is outside shooting and his ability to be a lockdown defender,” Warriors head coach Jeff Sanor said.

The versatile Payne averaged 11.5 points, 6.8 rebounds and 2.8 assists per game as a sophomore, earning second-team all-Southern Idaho recognition. Also a star football player, the 6-foot-5 Payne was the all-SIC first-team quarterback and punter in the fall.

“Jack is very competitive and plays every possession with a high motor,” Brave head coach Manny Verela said. “He can guard any position on the floor and can play any position offensively. This year we plan to run him anywhere from point guard to our post.”

A dynamic offensive player, Perrin can score in bunches from anywhere on the court despite his 5-foot-8 frame. Through four games this season, Perrin was shooting 55 percent from three-point range and averaging 9.5 points and three assists. He put up 8.3 points per game as a sophomore and was an honorable mention all-Southern Idaho selection.

“Bayler has great vision, is a great passer, shoots the ball well and can finish well inside for his size,” Mavericks head coach Jon Nettleton said.

A lockdown defender who also can shoot from long range, Randall was a second-team 4A all-Southern Idaho selection last season. He averaged 10.4 points, 2.9 rebounds, two assists and 1.9 steals per game as a junior while playing strong perimeter defense.

“Cade works and plays really hard,” Kavemen head coach Peter Longgood said. “In particular, he is a very good on-ball defender and sets the tone for the rest of our defense.”

A true center at 6-foot-11, Rowbury possesses elite size and moves well for his frame. He was a second-team all-Southern Idaho pick last season after averaging 13 points, 7.7 rebounds and 1.2 blocks per game. Rowbury has the ability to score inside and outside, shooting 41.3 percent on three-pointers (19 of 46) and 73.8 percent from the line (62 of 84).

Seeley can score at all three levels and is a knock-down shooter from three-point range. Tigers interim head coach Nate Hartman said Seeley improved his rebounding during the offseason. Seeley finished December averaging 15.3 points, 6.2 rebounds and 1.7 assists per game.

“Dylan has the ability to break down his defender off the dribble and sees the floor well on the drive,” Hartman said. “Defensively, we’ve come to rely on Dylan to guard one of the better opposing players. His footwork and length on both ends of the floor make him a tough matchup.”

At 6-foot-4, Sorenson can play multiple positions and excels at finishing at the rim. He was a second-team all-High Country pick last season as Idaho Falls, the 2019 4A champion, got back to the 4A state tournament. The Gonzaga baseball signee averaged 13.2 points, 7.1 rebounds and 2.1 assists per game in December.

“Jaxon is one of the fiercest competitors I have ever coached and been around,” Tigers interim head coach Nate Hartman said. “Jaxon can do a variety of things on the floor, including playing and guarding one through five. … He understands the game at an extremely high level and uses that to his advantage.”

White is a sturdy 6-foot-2 point guard who is having a strong start to his senior season. Through four games, he was averaging 12 points, six rebounds and four assists. He had 15 points and 10 rebounds in a recent victory at Bishop Kelly.

“Noah has excellent quickness and athleticism, is a great passer and finishes inside well,” Mavericks head coach Jon Nettleton said.