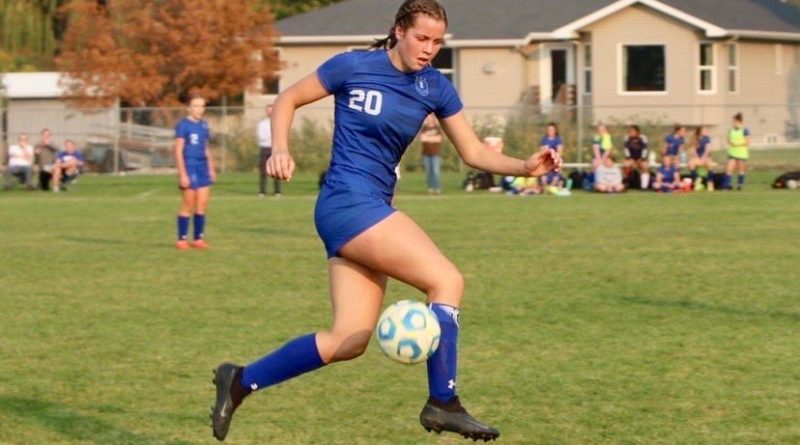 As one of the Vanderbilt University placekickers, Fuller became the first woman to score in an NCAA Division I big-conference (“Power Five”) college football game, converting two PAT kicks Saturday against Tennessee.

Bennion can relate. The two-time all-state soccer standout came out for football last fall to become the Diggers’ primary kicker when star Crew Clark was injured.

“(What Fuller accomplished) is amazing, and if you have the capability of playing with boys … it should be normalized,” Bennion said.

In other words, what Bennion doesn’t care much for is the see-what-girls-can-do-in-predominantly-boys-sports spectacle.

“Yeah, I mean I scored 11 goals in my first three (soccer matches), and there was no praise,” Bennion said. “I kick one PAT, and everyone knows about it.”

Bennion won’t be playing anymore football. Instead, she signed last week with two-year Lower Columbia College in Longview to play soccer and softball.

This is a teenager with serious thunder, not only in her leg, but in her bat as well.

In youth soccer, Bennion always played goalkeeper. When she got to high school, she started playing in the field – as a center back and at forward. She will likely be a defender or midfielder in college.

Last fall, while playing football at the same time, Bennion tallied a career-high 36 goals and 11 assists (and was named the Post-Register’s all-area player of the year). She finished her career with 82 goals.

“(LCC) found me. They were up in Boise and looking for games, and our game was going on at the same time,” Bennion said. “It was a pleasant surprise.”

What was more of a pleasant surprise was the fact LCC was open to letting Bennion play two sports.

In softball, Bennion is an outfielder with pop. She’s hit 24 home runs in two seasons – and is hoping to have a senior year in the spring.

“It was initially just going to be soccer,” Bennion said, “As I’ve gotten to know both of the coaches, I have gotten super excited to play both sports.”

That is not to say she did not enjoy her time in football.

“It was great. I loved the boys. They treated me like another teammate,” Bennion said. “I was just another football player.

“They worked so hard (for a third consecutive Class 3A title) – and let me be a part of it.”