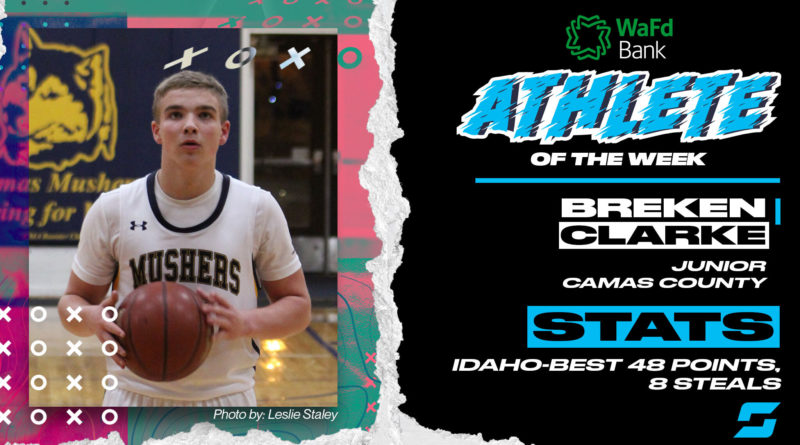 Clarke tallied an Idaho-best 48 points and eight steals in a win over Cascade.

We are currently accepting WaFd Bank Athlete of the Week nominations for the week of Dec. 7-13. If you would like to nominate an athlete, please email regan@scorebooklive.com or tag us on Twitter or Instagram at @sbliveid.

And here are the other athletes who were nominated for Nov. 30-Dec. 6:

Dylan Watson, Fruitland: The senior guard had a game-high 27 points in a loss against Firth.

Dallin Criddle, Liberty Charter: Tallied a game-high 26 points and 13 rebounds in a loss against Nampa Christian.

Blake Thurston, Cascade: Scored 25 points, including three 3-pointers, and had five steals in a loss to Camas County.

Jacob Ankeny, Marsing: The all-state forward set the pace with 21 points, 11 rebounds and three blocked shots in a win over Homedale.

Jose Gillespie, Gadded Valley: The senior guard had 19 points, eight rebounds and three steals in a victory over Camas County.

Braxton Pierce, Madison: The post player totaled a game-hiigh 20 points points in a victory over Skyline.

Crew Clark, Sugar-Salem: Fresh off winning a 3A football title, the guard scored a game-high 16 points in a state semifinal rematch win over Filer.

Jalen Skalskiy, Lakeland: Skalskiy scored 16 points off of the bench in a two-point loss to neighboring Lake City on Dec. 5, per the Coeur d’Alene Press.

Joel Mullikin, Lewiston: Mullikin scored 19 points, including four 3-pointers, in a big win over Timberlake, per the Lewiston Tribune.