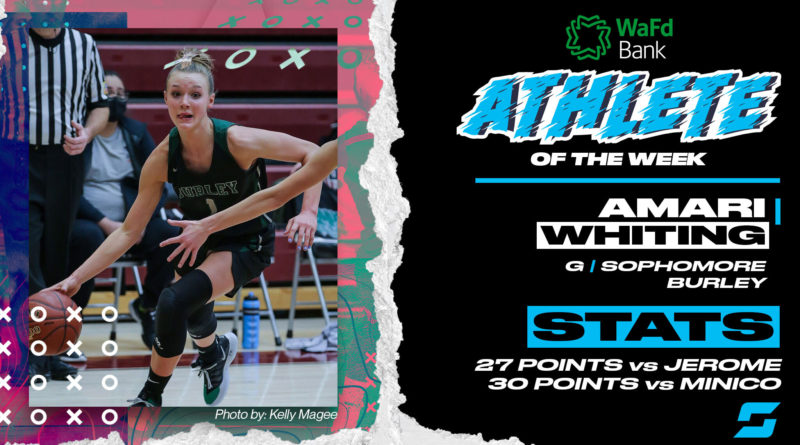 We are currently accepting WaFd Bank Athlete of the Week nominations for the week of Dec. 7-13. If you would like to nominate an athlete, please email regan@scorebooklive.com or tag us on Twitter or Instagram at @sbliveid.

Here are the previous WaFd Bank Girls Basketball Player of the Week winers:

And here are the other athletes who were nominated for Nov. 30-Dec. 6:

Kynlee Thornton, Lighthouse Christian: The forward scored a game-high 27 points in a victory over Ambrose School.

Kiya McAffee, Butte County: The junior poured in a season-high 26 points, including five 3-pointers, to remain unbeaten in a victory over Salmon.

Naya Ojukwu, Mountain View: The defending 5A champions got a big game from their all-state forward – 24 points on 10-for-14 shooting – in a win over Kuna.

Madison Hodnett, Liberty Charter: The all-state senior post player led the Patriots with 22 points and 10 rebounds in a victory over Council.

Kendall Clark, Melba: The sophomore forward led her squad with 21 points and 13 rebounds in a win over South Fremont,

Mattie Olson, Skyline: In a showdown of 4A contenders, the guard led a balanced attack with 18 points in a win over Century.

Eliza Anhder, West Jefferson: The junior guard poured in a game-high 18 points in a victory over Malad.

Dorcas Lupumbo, Emmett: The senior posted a double-double – 17 points and 17 rebounds – in a victory over Canyon Ridge.

Kaylee Banks, Sandpoint: The guard scored a game-high 16 points, including seven free throws (10 of 12) in the final minute in a win over Lewiston.

Addie Kiefer, Lakeland: Keifer scored 17 points and pulled down 13 rebounds in a win over Moscow on Dec. 5.

Grace Sobotta, Lapwai: Sobotta logged 18 points and five boards in a 67-23 win over Potlach over the weekend.