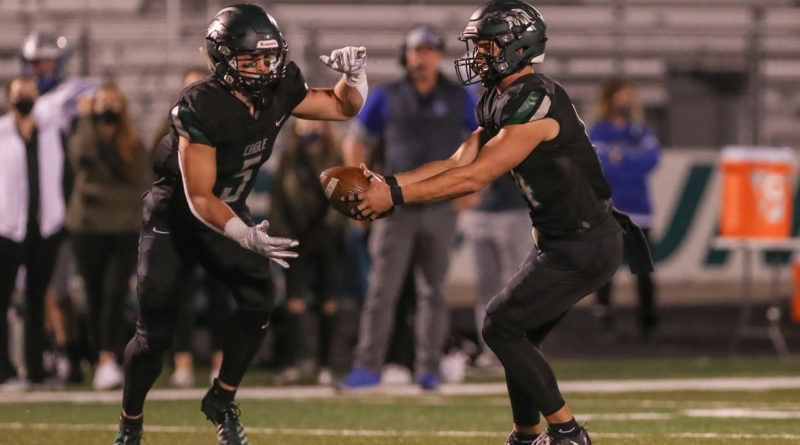 And now it is time for SBLive to release its all-state football team — spanning all classifications — including individual awards.

A rare combination of change of pace, pure speed and strength help Ford stand out. What makes him a winner? Grit, natural leadership and a deep understanding of the game. Ford, a lifelong receiver/DB who was tapped to play quarterback as a sophomore, threw for 977 yards with 14 touchdowns and three interceptions and ran for 1,056 yards and 12 more touchdowns on 11.5 yards per carry. In his one game playing defense, he logged nine tackles. Ford, the 5A SIC Player of the Year, led Eagle back to the 5A quarterfinals. After a nail-biting season-ending loss to Rigby, Trojans coach Armando Gonzalez called Ford “one of the best high school football players I’ve seen in a long time.”

The steady presence and cool hand at the center of powerhouse Coeur d’Alene’s offense over the last two years put together an all-state junior season and continued to improve. As a senior, he surpassed his 2019 total touchdown count in three fewer games (40 total touchdowns: 32 passing, eight rushing) and accounted for 2,396 passing yards opposite five interceptions.

The consummate leader who started in the 2018 state championship game as a sophomore, Albert, a returning all-state performer, moved outside after spending the past two seasons as the strong-side linebacker so he could accomplish one thing – chase the football. The all-5A SIC first teamer did just that (55 tackles, five TFL, three sacks). He also plays rugby.

When big No. 42 was in the area, opposing quarterbacks got happy feet. All the unanimous 4A SIC defensive player of the year did was make big plays, especially in the backfield (287 career tackles, 63 TFL, 33 sacks, caused nine fumbles). He was simply too fast for blockers on the edge, and dominated as a senior with 106 tackles, 21 TFL, 10 sacks and three forced fumbles.

His numbers (82 of 129, 1,482 yards, 17 TDs, two INT) might not jump off the page, but ask the coaches who had to defend him as a first-year starter – he was an impressive, efficient leader who was not rattled. In fact, you could make a case his play was the biggest reason why the Grizzlies went from 5A contenders to undefeated state champions.

Among a great crop of candidates, Hargitt, a former lineman, easily got the most out of modest numbers as coach of one of the smallest 4A schools in the state. Not only did he guide the Huskies to their first 4A SIC title, then a trip to the state finals against Skyline – he also had to help his program overcome tragedy and off-the-field controversy along the way.

Dominant tailback can run past you and over you, tallying 1,058 rushing yards and 10 touchdowns.

Hauled in 750 yards and nine touchdowns through the air as the Mavericks’ top target. 5A SIC-West offensive player of the year.

He was an all-state choice a year ago and remained every bit the playmaker in 2020, hauling in 68 catches for 834 yards and nine total touchdowns to lead Post Falls to the 4A playoffs.

QB Cade Marlow’s favorite target was in the slot. Maloney caught 48 balls for 761 receiving yards and 18 total touchdowns, as well as four touchdown catches in the 4A state title game.

Put him anywhere on the field and he’ll soar. But the 4A Inland Empire League player of the year and Utah commit was a matchup nightmare in the Bears’ pass attack.

Sturdy presence in the trenches helped Century allow just three sacks on the season and was the key to a flourishing run game in the postseason.

He was the only two-way first team all-5A Southern Idaho Conference for a reason, helping pave the way for the state’s most dangerous run game.

A second team all-state lineman a year ago, Kohal — a 6-4, 300-pound Air Force commit — gave all-state QB Jack Prka breathing room in the pocket and was a trusted leader for the Vikings, too.

The uber-athletic 4A SIC all-conference selection (on both sides of the ball) was active at left tackle in establishing the Knights’ run game, gap blocking — both up the middle and around the edge.

The most crucial piece in the Trojans’ power run game and a pulling tackle, Olvaseon was a first team all-4A High County choice.

Did a little bit of everything for the 3A power in the five games he played, including hitting 30 of 34 PATs and booting away 18 touchbacks on kickoffs.

This all-4A High Country plugger shut down the middle on all running backs (66 tackles, 11 sacks).

Shed weight, got faster – and arguably became the most feared playmaker (97 tackles) on Grizzlies defense.

Returning from Tommy John surgery, Matthews picked off five passes at safety – and had 2,500 yards of total offense.

A downhill attacking missile at free safety, the 3A Snake River Valley MVP was a two-way terror (61 tackles, five INT).

It was a chore moving the football on the Trojans’ defense, and he was a shutdown cornerback (31 tackles, four INT).

Was 1,000-yard passer on offense, team’s best defensive back – and averaged 46.4 yards per punt on special teams.