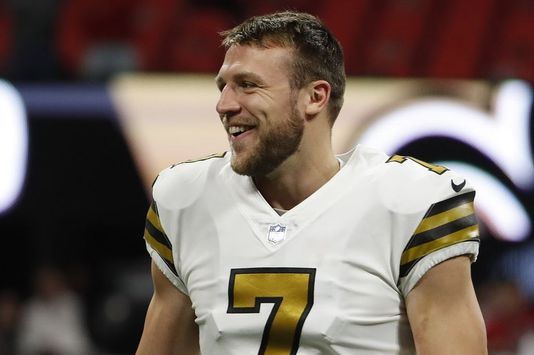 Gino Mariani doesn’t play fantasy football, but he had a surefire suggestion last week for his Highland High School assistant coaches who do.

“He’ll do some things,” Mariani said.

Of course, Mariani has insider knowledge of the new starting quarterback for the New Orleans Saints: He was Hill’s high school coach.

And Mariani was spot on – Hill completed 18 of 23 passes for 233 yards with no touchdowns or interceptions, but added a pair of rushing scores in leading the Saints past Atlanta, 24-9, on Sunday.

With Drew Brees (shoulder) expected to be sidelined another month, this appears to be Hill’s show for the NFC’s top-seeded team – at least for now.

Mariani admitted he was pacing around in the living room at home Sunday watching Hill, who was Idaho’s state Gatorade player of the year as a senior in 2008 after throwing for 2,269 yards and 18 touchdowns, and rushing for 1,491 yards and 24 touchdowns in setting the school’s all-time record for total offense.

Hill originally gave Stanford a verbal pledge, but instead attended BYU where he started 33 games at quarterback – and is the Cougars’ career leader in rushing for a quarterback (2,815 yards).

Undrafted in 2017, he signed with the Green Bay Packers – then caught on with the Saints, and has been with them ever since.

“This was a long time coming, and this opportunity does not present itself often,” Mariani said. “I thought, early on, there was conservative play-calling … but in the second half, they opened it up. Taysom did a great job in the pocket, and he moved well.

“Overall, for it being his first game of being a straight-up quarterback, he was pretty good.”

Back to the fantasy-football development: Given the fact Hill has served as a jack-of-all trades contributor on offense and special teams for the Saints, he was listed all of this season in certain fantasy leagues as a quarterback and tight end.

So when news broke Friday that he would be the starting quarterback, fantasy-football players rushed to acquire him as a free agent – at tight end.

But when Mariani advised his staff to go ahead and pick Hill up, it was only as a quarterback.

“He can play tight end, quarterback, fullback and wide receiver. He can do a lot of different things – he is that good of an athlete,” Mariani said. “But I know what he can do as a quarterback. Did we run him a lot (at Highland)? Absolutely. But he is not a gadget guy. He is a full-blown quarterback built like Adonis.”

Mariani said the two exchange text messages throughout the NFL season. Once the longtime coach heard the news Hill was going to make his starting debut at quarterback for the Saints, he sent along one pointed piece of advice.

“Be Taysom Hill. Don’t be Drew Brees, and you’ll be fine.”