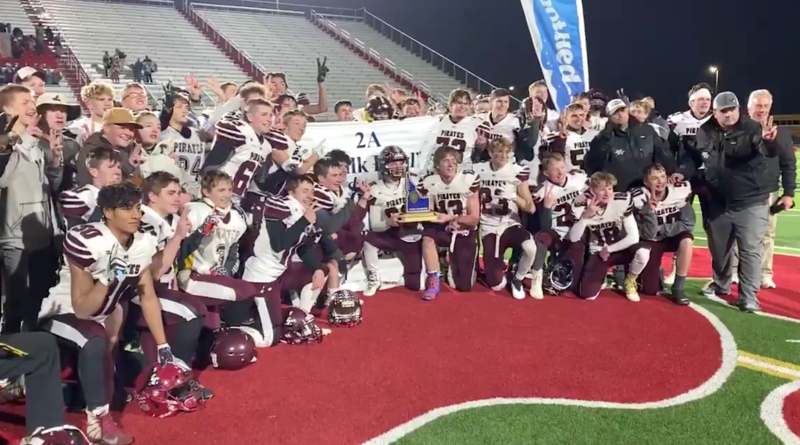 As time expired and celebration ensued, Taze Stegelmeier leapt up for an interception. The 5A state championship had long been sealed, but the West Side senior linebacker’s snag in the final seconds put a tightly wrapped bow on the Pirates’ crowning moment.

West Side strengthened its positioning atop the 2A mantle by thrashing Firth to repeat as Idaho state football champions.

It’s no secret West Side boasts the top defense in the state, holding teams to less than a touchdown per game on average led by a former all-state quarterback Tyler Brown. On Saturday afternoon, that defense had the final say, shutting out Firth 39-0 at Madison High School in Rexburg.

There may have been no more fitting way to end it than in Stegelmeier’s hands. A first team all-state linebacker as a junior, he dislocated his hip and partially tore his hip flexor over the summer. West Side thought they’d lost a leader for the season.

Doctors told Stegelmeier he’d need four-to-five months for his injury to heal, or he could play through what pain he could tolerate. Stegelmeier, who delivered several bone-crunching tackles on Saturday, opted to suit up and play.

“He’s played on one and a half legs all year long and I thought it was super fitting the last play of the game was an interception by him,” West Side coach Tyson Moser said.

It’s players like Stegelmeier who have allowed West Side (11-0) to uphold its No. 1 ranking all season to win its seventh state title. Moser, who finishes his 12th season on the sidelines, has been on staff for five of them, four as head coach. This one feels different, because of how he felt West Side played with a target on its back all season.

“We’re usually underdogs,” Moser said. “This is the first championship game I’ve coached in where we’ve been favored to win.”

The Pirates extended its win streak to a statewide-best 21 games with the win over Firth (8-4), who they previously beat 33-6 to open the season. And while it was made official with Stegelmeier’s interception on the last play of the game, the win was forged by a strong pivot to its passing game and a consistent defense that let the offense operate pressure-free.

With 6:39 left in the game, Shurtliff took an interception back 60 yards for touchdown to give West Side its winning lead at 39-0.

“We aren’t really known for passing the ball, but our passing game stepped up tonight,” Moser said.

After the game, the West Side team drove home some two and a half hours to meet its town. As is tradition in Dayton, an escort of police cars, fire trucks and ambulances will take the team through a town full of cheering fans, snaking all the way back to the high school, where a banner and trophy presentation and a party awaits.

All in the same day.

“It’s a big deal in our community,” Moser said, “everyone’s just excited about it.

“We had quite a few people up here today. Happy about that.”

Fans were allowed under local exemptions but could not fill more than 15 percent of the stadium, reported The Idaho Statesman. West Side sold out its 400 ticket allotment nearly immediately, as well as the remaining tickets Firth did not sell.