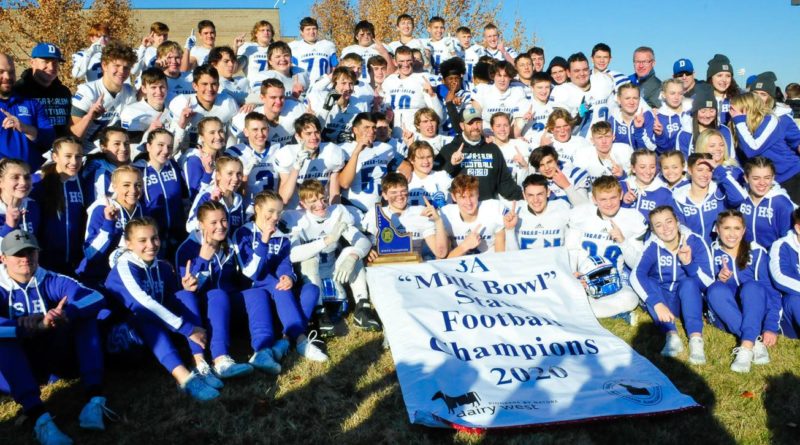 MIDDLETON — Sugar-Salem’s three-peat bid came down to the final play at Middleton High.

On fourth-and-goal from the 4-yard line, Homedale quarterback Jaxon Dines rolled out to his right in overtime of Saturday’s Class 3A state championship game. Dines had the option to run or throw, and the sophomore noticed that Keagen Christensen got a clean release on his corner route. He delivered a perfect pass to Christensen, who high-pointed the ball over defensive back Cooper Porter but still needed to complete the catch as he fell to the ground.

At the last second, a hard-charging Porter managed to knock the ball loose from Christensen in the back-right corner of the end zone. It was a breathtaking sequence of events that will be remembered forever in Sugar City.

“Best day of my life, easy,” said senior Crew Clark, who scored the last two Sugar-Salem touchdowns. “I’ve won three state championships at this school, and none feel better than that one.”

Sugar-Salem (10-1) and Homedale (8-2) had plenty of recent history entering the final. The two powers also met in the 2018 and 2019 title games with the Diggers prevailing by scores of 30-22 and 48-14, respectively. Saturday’s showdown was the best of the bunch.

“We were the underdogs coming in … and it feels great,” Sugar-Salem senior Spencer Blaser said. “We feel on top of the world right now.”

The Diggers trailed 20-0 late in the second quarter before mounting a comeback, pulling even at 28-28 with 3:25 remaining when Kyzon Garner hit Clark on a slant for an eight-yard touchdown on fourth down. Both teams had a chance to win in regulation, but the Trojans turned it over on downs at the Sugar-Salem 39 and Clark came up short on a 55-yard field goal as time expired.

On the first play of the Kansas Plan overtime, Clark took a reverse around the left side for an easy 10-yard touchdown. His sky-high point-after attempt was no good, leaving an opening for Homedale.

The Trojans fed workhorse tailback Hayden Kincheloe on their first three downs, and the junior got it to the 4. The fourth-down rollout play was there, but Porter recovered to make the winning pass breakup.

“They ran the same play (a few) plays before that and the quarterback actually kept it and ran, so I went up on the quarterback,” Porter explained. “Then I turned around and saw (Christensen), so I started running toward him. I put my helmet in his stomach and he actually caught it over me, so I pushed back and I guess my head popped it out of his hands.

“I thought he actually caught it and then I saw (the ball) behind me, and I kind of fell down and started crying.”

Clark was the cornerback on the other side of the field. Just like Porter — and most of the Sugar-Salem sideline — he thought it was a completion before seeing the ball on the ground.

“I saw him catch it, I thought he was going to score a touchdown right there,” Porter said. “Then I saw Cooper come in, hit his arm on the ball, and it fell out. That’s when I realized we were state champs, three in a row.”

Through 20 minutes of play, it appeared Homedale would be ending Sugar-Salem’s streak and cruising to its first state title since 1997. The Trojans jumped out to a 20-point lead and outgained Sugar-Salem 320-32 in the first half. Jonah Schulthies’ 81-yard kickoff-return touchdown was the only positive for the Diggers, who trailed 20-7 at the break in a dense fog.

“The coaches, when we were in the locker room at halftime, they gave us a talk,” Porter said. “They just said, ‘This is your guys’ year.  You can either come out of here with a bad attitude about it, or you can pick yourselves up and make something happen,’ and that’s what we did.”

Sugar-Salem promptly went three-and-out on its first possession of the second half before putting together a strong drive that ended with Garner’s one-yard touchdown plunge. On the first play of Homedale’s next possession, Dines was swarmed in the end zone by multiple defenders and coughed it up. Blaser fell on the ball for the easy touchdown, and Clark’s subsequent PAT gave the Diggers their first lead at 21-20.

“The two D ends and the tackle all crashed in on (Dines),” Blaser said. “Someone swung and hit his arm, and I came down with the fumble and the touchdown. The ball was just rolling, so I dove on it before it went out of bounds. … I kind of looked up and was like, ‘Oh, what just happened?’ (The referees) held their hands up, and that was it.”

Kincheloe put Homedale back in front with an eight-yard touchdown run early in the fourth, but Sugar-Salem was able to overcome Garner’s red-zone fumble and force overtime as the sun finally emerged.

Kincheloe shouldered most of the load for Homedale, running 38 times for 199 yards and a touchdown.

“He’s a great running back,” Porter said of Kincheloe. “You just have to hit him low, gang tackle him and get all 11 guys to the ball.”

Dines completed 10 of 18 passes for 194 yards with two touchdowns and one interception. His favorite target was Mason Strong, who caught five balls for 104 yards and a score.

Garner finished 10 of 16 for 147 yards with a touchdown and rushed for 23 yards and another score. The Diggers amassed only 67 yards on 26 carries and abandoned the wing-T for a spread attack in the second half.

“That’s what worked this game and that’s what we stuck with until the end,” Clark said.