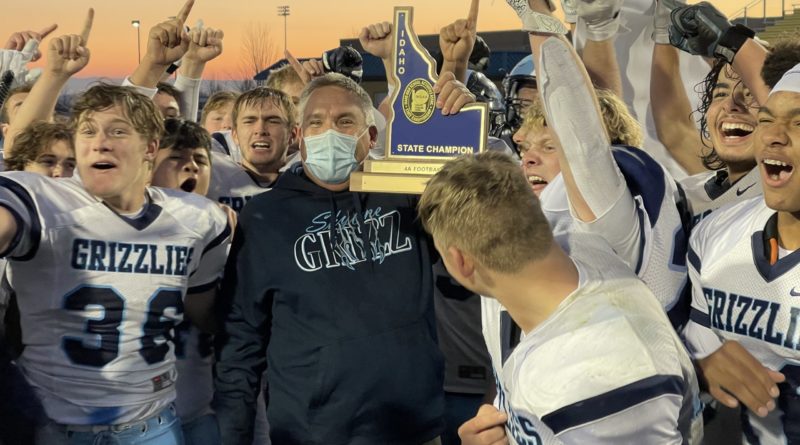 Well, at least for now.

The Skyline High School football team now stands alone as the most decorated 4A program in Idaho. The Grizzlies cruised by Emmett 42-22 in the 4A finals Saturday evening at Middleton High School. The win gave them their record-setting seventh state title to break a tie with fellow perennial power Bishop Kelly for the most state championships at the 4A level in Idaho history.

“I’m gonna say this is the best 4A program ever,” Skyline senior running back Eli Ames said.

The Grizzlies (12-1) returned to the top of the mountain after three long years away. Following back-to-back state titles in 2016 and 17, the farthest they got in each of the next two seasons were the quarterfinals. Skyline didn’t even make it out of the first round last season. It suffered a 41-0 drubbing to Vallivue at home instead.

“That one sunk in for a long time and I told myself and my team, “We’re never going to feel like that ever again,’” Ames said.

He was pretty much right.

Skyline rolled through the 4A ranks with an average margin of victory of more than 29 points. The closest any team came against the Grizzlies was Blackfoot at 14-3. But that was all the way back in September. They spent the final six weeks of the regular season ranked No. 1 in the state. Their only blemish was to 5A runner-up Rigby.

“It’s a special group of kids,” said Skyline head coach Scott Berger in tears. “We knew all along that this was going to be a good group. The beauty of it is, when they were eighth graders, we had two teams playing for the championship and afterwards they said, ‘Hey, now we’re gonna come together.’ We just got a lot of good football players.”

Those players included the three-headed monster of senior quarterback Cade Marlow, senior slot receiver Connor Maloney and Ames. Marlow went 14-of-20 for 238 yards and four touchdowns. Three of those touchdowns went to Maloney, who hauled in four total on the night. He finished with five catches for 152 yards, which included corralling a 56-yard score from senior wideout Davien Cruz on a double pass to put the Grizzlies up 23-7 early in the second quarter.

“We just put it in this week and we’re like, ‘OK, we’re gonna do it. We’re gonna take a shot,’ and it ended up working,” Maloney said.

Ames rounded it out with 89 yards of total offense. He recorded four receptions for 50 yards and a TD, while running for 39 more yards and another score, including the final one for the Grizzlies on a 3-yard run to put them up 42-14 with 3:07 remaining.

“There’s so many people on that field for them, they can score every time they touch it,” Emmett coach Rich Hargitt said. “It seems like every time you turn around and take one weapon away, another weapon emerges. It’s incredibly hard to hold them to a manageable point total.”

But the defense, which entered as the state’s best at just 11.5 points per game, was the game’s real hero. It came through once again despite five Skyline turnovers, four of which were in the first half.

The Grizzlies turned the ball over on their first two possessions of the game. Ames fumbled on the second play from scrimmage before Maloney coughed it up on the ensuing kickoff. It all led to a 7-0 disadvantage and the Huskies with the ball at midfield a minute and a half in.

However, Skyline’s defense, which included nine returning starters, forced them to punt. Emmett turned the ball over on downs twice and punted four times on their next six possessions, while the Grizzlies broke open the game with 29 unanswered points.

“I’ve said it before, but I’ll say it again, our defense is the best 4A defense,” Ames said. “They’re what made Skyline, Skyline this year.”

The Huskies did get within two scores in the second half. Jeffrey Lockett returned a Marlow interception 53 yards to set them up with a 1st-and-goal at the Grizzly 7. Westyn Smith ran it in one play later to trim the deficit down to 29-14 with 2:28 to go in the third.

But Skyline quickly squashed that momentum with a back-breaking 10-play, 63-yard scoring drive. Marlow hit Maloney for his fourth and final TD catch of the game on a 19-yard reception to make it a 35-14 game with 10:22 remaining. And really from there, the celebration was on.

“It’s the best feeling,” Maloney said. “I just wanted to win. Just celebrating with my teammates on the bus ride home is going to be an even better feeling.”

Emmett quarterback Caden Young combined for 175 yards of total offense and a score. He went 9-of-25 for 133 yards. Smith added 74 yards on the ground for the Huskies (10-3), who still collected the first-ever 4A state trophy in program history. This after going 1-8 two years ago and being picked to finish fifth in their own conference this season.

“Our goal this year was to earn the respect of 4A programs across the state and that playing Emmett is not a joke,” Hargitt said. “That we deserve to be on the field with 4A competition. And I would like to think that we’ve earned that respect. We didn’t play very well tonight, so maybe we didn’t earn it tonight. But I think throughout the course of the year, the course of the playoffs, we showed we’re a legitimate team that should be taken seriously and not to be taken lightly. So I’m incredibly proud of our kids.”