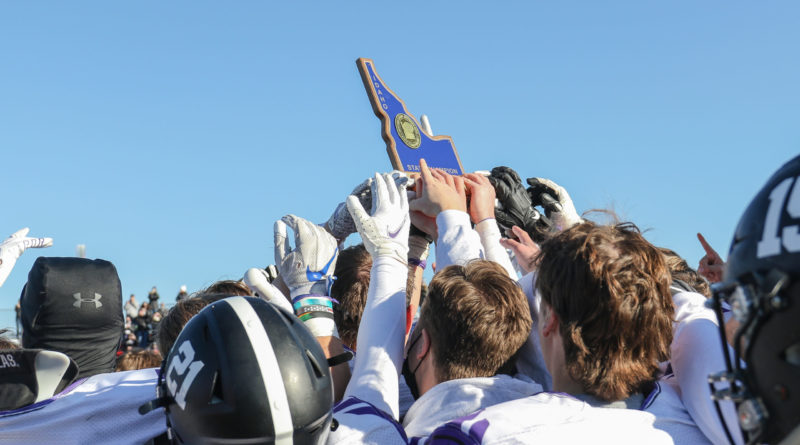 Rocky Mountain coach Chris Culig didn’t have time for a long-winded coronation speech to his newly-minted 5A champion Grizzlies. In the “chaos” of the postgame celebration, he kept his message brief.

“I told them how proud of them I was,” Culig said. “It’s been a really successful group since they were freshmen and I was really happy with that.”

Kobe Warr threw for 150 yards, ran for 81 more, including a game-sealing run to convert on 3rd and 8 in the final seconds to power Rocky Mountain to a 5A Idaho state football championship win over Rigby on Saturday, 17-14.

And while Rigby largely kept dynamic running back/receiver Jordan Erickson away from his big-play tendencies (19 yards, no touchdowns), Warr found space on the ground all day with the same poise Culig has known since he first saw Warr play as an eighth grader.

“He’s just always had that knack,” Culig said. “He’s got an unbelievable pocket presence. He knows when and where to run. He’s not going to take it to the house, but he’s going to keep moving the chains. He’s done it as long as I’ve watched him.”

The Grizzlies, who have been a mainstay in the state semifinals over most of the last decade, snapped Rigby’s state-best 20-game win streak to win its third state championship in six years (They also won in 2015 and 2018).

In a matchup that featured two of the state’s most prolific offenses, both defenses took over. Fans in attendance at Rexburg’s Madison High School watched a low-scoring affair that featured six total turnovers between two offenses that averaged more than 40 points per game throughout the season.

Rigby, the defending 5A state champ, was responsible for four of those turnovers, but rallied a second half comeback behind backup quarterback Taylor Freeman and tight end Con Dansie. The Trojans pulled within three points on a Freeman misdirection shovel pass that Dansie took seven yards for a touchdown with 3:40 left in the game.

Rocky running back Max Lehman scored a game-high two touchdowns on the ground, including the 14-yard sprint around the right edge to put Rocky Mountain up 17-7 early in the fourth quarter.

Rigby’s offense spurted and sputtered in the first half and was kept off the field by turnovers while its defense them the Trojans in the game. Then Freeman, a junior receiver/QB, stepped in under center in the second half and threw for a touchdown, completed 11 of 18 passes for 168 yards and jump-started the offense to help give Rigby a shot at winning.

Entering the season, Freeman lost a quarterback battle with junior Tiger Adolpho, a transfer from Hawaii and the starter most of the year. He was still a threat at receiver all year and when Rigby needed to tamp down on turnovers, he was called upon to step back under center.

“Taylor gave us some life and we stuck with him,” Gonzalez said.

Each year entering the last game of the season, Rigby has a tradition of naming a junior as captain — somebody who will lead the program through the offseason into the following year. Fittingly, that player on Saturday was Freeman.

Rocky Mountain has long been considered among the top crop of teams in Idaho’s big school classification. The team’s expectations are always to play in the 5A Milk Bowl. The dreams aren’t realized, Culig said, without a driven group of players who hold themselves to a championship standard.

“The similarity between the three teams was really the vibe of the team,” said Culig, the team’s D-coordinator before he was hired as the head coach in 2017. “I knew we had the makeup — the heartbeat of the team is similar to those other teams. No drama, everyone was all-in for the team and I couldn’t be more happy for them.”

The last time these two teams met was in the 2019 5A semifinals. Rigby won 31-9 on the road. Saturday’s low-scoring title stood in stark contrast to the double-overtime victory Rigby claimed over Coeur d’Alene, by a final score of 57-56, in the 2019 5A state title in the Kibbie Dome.

Rigby coach Armando Gonzalez had made peace with the loss within hours of the final horn, in part because reaching the game solidifies the Trojans as a 5A power.

“You can’t win ‘em all,” Gonzales said. “Sometimes you have to accept the result, even if it’s not something you like. The process is not void of pain sometimes and that’s what these kids need to realize. We can be victims of our circumstance, or be victors and keep moving on and keep getting better.”

Fans were allowed under local exemptions but could not fill more than 15 percent of the stadium, reported The Idaho Statesman.