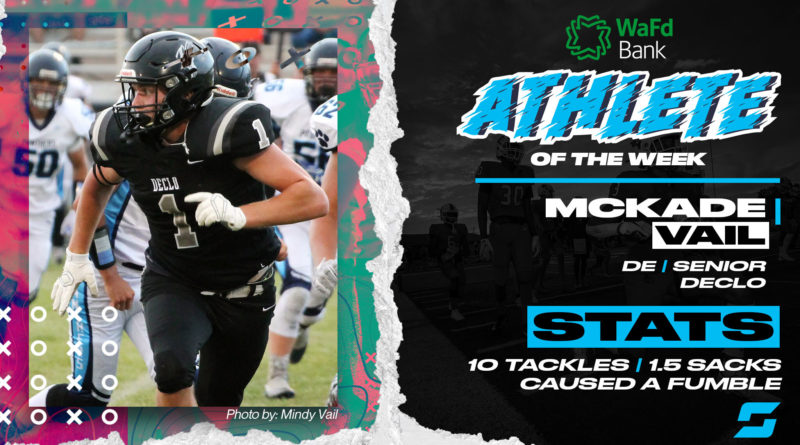 Vail had 10 tackles, 1.5 sacks and caused a fumble in Declo’s game against West Side.

We are currently accepting WaFd Bank Athlete of the Week nominations for the week of Nov. 16-22. If you would like to nominate an athlete, please email regan@scorebooklive.com or tag us on Twitter or Instagram at @sbliveid.

And here are the other athletes who were nominated for Nov. 9-15:

Crew Clark, Sugar-Salem WR: Rushed for 110 yards on 16 carries and a touchdown in the Diggers’ win over Kimberly. (READ MORE)

Logan Cutler, Sugar-Salem RB: Bruiser rushed 27 times for 162 yards and three touchdown in the Diggers’ victory over Kimberly in the 3A semifinals. (READ MORE)

Jordan Erickson, Rocky Mountain RB/WR: Caught a 67-yard touchdown going into halftime to claim a lead over Coeur d’Alene, one of his three touchdown catches on the night to beat the undefeated top seed from the north in the 5A semis.

Cade Marlow, Skyline QB: Scored the tie-breaking touchdown run — a 13-yard scamper — in the third quarter of an eventual 20-0 4A semifinal win over Sandpoint. Connected on 14 of 25 passes for 144 yards and a touchdown. (READ MORE)

Wesley Millburn, West Side DE: Registered 12 tackles, including half of them for losses in a 2A semifinal win over Declo. (READ MORE)

Cooper Owen, Skyline DB: Had the signature moment for a defense that held Sandpoint to 99 total yards with his 41-yard interception return for a touchdown in the fourth quarter. (READ MORE)

Heath Owens, Kimberly QB: Passed for 141 yards and two touchdowns, and rushed for another 36 yards and a score in a loss to Sugar-Salem. (READ MORE)

Caseyn Pearson, Emmett DB: His interception at the century 16-yard line with 1:18 to play helped seal a 4A state semifinal win.

Cody Steiger, Sandpoint DB: Had two interceptions in a 4A semifinal loss to Skyline, in which Sandpoint was buoyed by its defense. (READ MORE)

Kobe Warr, Rocky Mountain QB: Accounted for four touchdowns — three touchdowns to Jordan Erickson through the air and another on the ground — for 235 total passing yards in a semifinal win over Coeur d’Alene.

Arthur Williams, Rocky Mountain RB: Ran in the 5-yard insurance touchdown with 1:35 left in the fourth quarter to all but seal a 36-21 win over top seed from the North, undefeated Coeur d’Alene.

Caden Young, Emmett QB: Broke off a 61-yard touchdown run early in the fourth quarter and threw two touchdown passes in a 27-22 win over Century to earn Emmett a 4A title berth.

Hayden Kincheloe, Homedale RB: The junior halfback averaged almost 10 yards per carry on his way to a 348-yard and four-touchdown day in Homedale’s 48-28 victory over South Fremonot.

Jaxon Dines, Homedale QB: Dines, a sophomore, rushed for 116 yards and three touchdowns to help lead Homedale to a 48-28 victory over South Fremont.