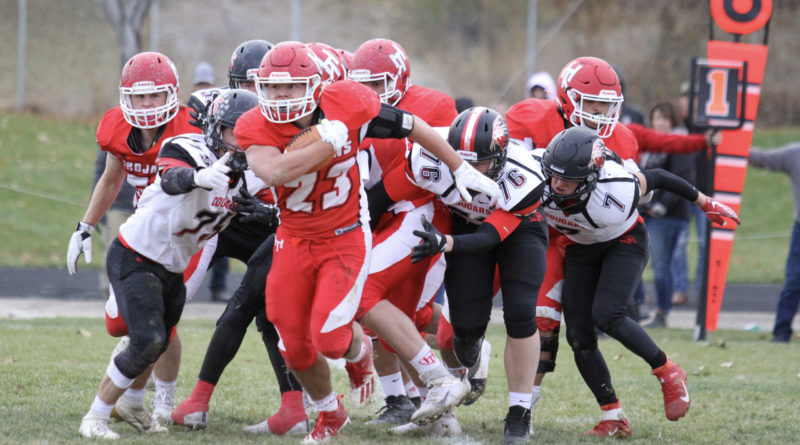 HOMEDALE — Matt Holtry really tried to hold it all in.

But even the Homedale High School football coach’s mask didn’t hide it.

Tears poured into the crimson fabric in the aftermath of a 48-28 3A state semifinal win over South Fremont Saturday afternoon. It was hard to blame him.

After many coaches and media pundits stated before the season that he had missed his window at that elusive championship, the Trojans (8-1) punched their ticket to the 3A state title game for the third year in a row. It’s the first time in 21 years they’ve achieved that feat.

Homedale will play two-time reigning state champion Sugar-Salem (9-1) in the finals next week.

“We’re a small 3A school. So when you graduate a big senior class like we did, I kind of would have thought the same thing,” Holtry said. “But only the people that knew the kids that were coming up and coming back, really knew that, ‘Hey, we’re gonna be OK.’

“It’s not about rebuilding, it’s about reloading. And that’s a testament to this community, though, because it’s 12 years in the making to get our program to this point where we can reload now.”

The Trojans tallied 468 yards on the ground with most of those coming from Hayden Kincheloe. The junior halfback averaged almost 10 yards per carry on his way to a 348-yard and four-score day.

“I make of it the O-line did their job and I’m lucky to have an O-line like them,” Kincheloe said. “They’re always talking and rooting me on. It’s awesome.”

Sophomore quarterback Jaxon Dines added another 116 yards and three touchdowns for the Trojans, who were picked third in the six-team Snake River Valley Conference. Fruitland and Weiser, which they combined to beat by 98 points last season, were both ahead of them. The logic stemmed from the loss of 13 all-conference players, including quarterback Daniel Uranga, the SRV Player of the Year a season ago.

So much for that.

“It was a nice little chip on our shoulder and we came out and proved everybody wrong,” Kincheloe said.

After trading blows with the Cougars (8-3) for the first 15 minutes of the game at 14-14, Homedale rattled off 27 unanswered points. A 2-yard TD run by Dines  — his third of the game  — gave them a seemingly insurmountable 41-14 advantage with 5:21 remaining in the third quarter.

But South Fremont, which is the only team to beat Sugar-Salem this season, made things interesting. Back-to-back touchdown throws from Kaimen Peebles to Tag Bair brought the Cougars back within two scores at 41-28 with 10 minutes left in the game. Homedale started the ensuing drive with a false start and had a 30-yard run by Dines negated by a holding penalty on a pivotal 3rd-and-5.

“Hayden (Kincheloe) said, ‘Keep pounding it,’” Holtry said. “What do you do as a coach when you got a kid that believes that much in his offensive line and himself?”

Holtry gave him the ball.

Kincheloe not only got the first down, but followed it up with a 19-yard touchdown run later in the drive. His fourth and final score put the game away for good at 48-28 with 5:01 to go.

“He’s something special,” senior linebacker Milo Mertz said. “We have the best running back in the state.”

The Diggers have claimed back-to-back titles at the Trojans’ expense. They won 30-22 in 2018 before routing them 42-14 in the championship game last season.

However, Homedale will get another crack at Sugar-Salem, and its first state title since 1997.

“We need to bring our history back,” senior defensive end Thomas Symms said. “It needs to become a tradition now.”

Peebles went 17-of-30 for 221 yards and three touchdowns in the loss for South Fremont, which was playing in its first state semifinal in program history. All of his TD passes were to Bair, who finished with 46 yards receiving. Easton Kerbs recorded a game-high five catches for 86 yards.

(All photos by Danielle Forsberg)