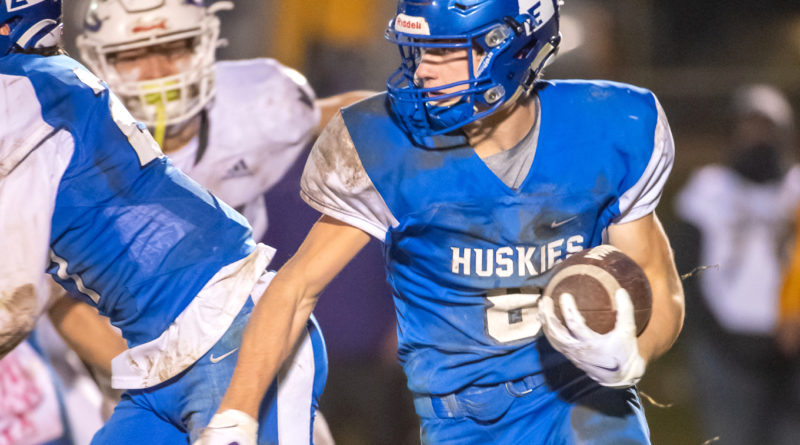 The Emmett High School football team kept its Cinderella season alive with yet another improbable win Friday night. This one was of the 27-22 come-from-behind variety over three-time state champion Century in the 4A state semifinals.

With the win, the Huskies (10-2) advanced to a state title game for the first time in five years and the first 4A state championship game in program history.

“It always works out in the end for Cinderella,” said Emmett senior halfback Westyn Smith, who rushed for 82 yards and scored the team’s first points on a 6-yard touchdown run at the 4:17 mark of the opening quarter.

“Oh, it means a lot,” said junior quarterback Caden Young, who threw for 121 yards and two TDs. “Two years ago, we were obviously 1-8, and that wasn’t where you wanted to be. But to be able to come this far and work this hard to get where we are, it feels great. It’s a good sense of accomplishment. But we also need to know in the back of our minds, we’re not done yet. So we can enjoy this win, but we need to go back out there.”

Despite everything that’s come their way, from being picked fifth in their own conference to even the death of one of their own players, the clock still hasn’t struck midnight on them.

And Friday was no different, even if it always didn’t seem that way.

Emmett allowed the Diamondbacks (7-4) to go 80 yards in eight plays on their opening drive of the game to fall into an early 7-0 hole a little more than three minutes in. An 8-yard touchdown pass from McKean Romreill to Bruin Fleischmann put the Huskies on the brink of falling down double digits at 16-7 with 1:22 remaining in the second quarter.

But then Emmett did something it really hadn’t done all game — pass. The Huskies had thrown the ball just five times up to that point. But Young, who entered the game with 1,333 rushing yards, showed he has a pretty good arm too. He completed back-to-back passes of 27 and 21 yards to give the Huskies a 1st-and-10 at the Century 12-yard line. Two plays later, he threw the ball across his body while on the run to Jack Maxwell for a 12-yard touchdown to cut the lead down to 16-14 with 22 seconds left in the half.

“I thought that his ability to throw the football down the field tonight changed the game for Century because it was the counter punch they weren’t prepared for,” Emmett coach Rich Hargitt said.

And Young was far from done either.

After a Smith interception set the Huskies up at the Diamondback 49, Young gave them their first lead of the game. He hit Tanner Wilkerson in the back of the end zone for a 6-yard TD to put Emmett out in front 21-16 with 4:23 to go in the third.

Young then went back to his trusty feet. He darted untouched up the middle for a 61-yard score to cap a 20-0 run for the Huskies and extend the lead to 27-16 with 11:45 left in the game. He finished the game with 143 yards rushing.

“I walked up to him and I looked him in the eye and I said, ‘Son, do you want to play for the state championship?’ I said, ‘Well, I’m gonna tell you something. You’re gonna need to be a hero and win this freakin’ game. Somebody’s gonna make the play that sends them to the show. So why not you?,’” Hargitt said. “And he walked off and won the game. If I had known he was going to do that, I would have told him 20 minutes earlier.”

But it was Emmett’s defense, which finished the night with three turnovers and six second-half points, that sealed it.

After Century finally got back on the scoreboard with 4:30 remaining via a 6-yard TD pass from Romreill to Fleischmann — their third connection of the evening — it got one last chance to win the game with 2:14 left to play. And it certainly looked that way after an Emmett personal foul  penalty put the ball at the Husky 41.

Caseyn Pearson had other ideas, though.

The junior defensive back picked off an underthrown ball by Romreill and returned it all the way down to the Diamondback 27. The celebration was on from there.

“We don’t let down. We just keep on going,” Pearson said. “Now it’s time to go win the title.”

(All photos by BruceB Photography)