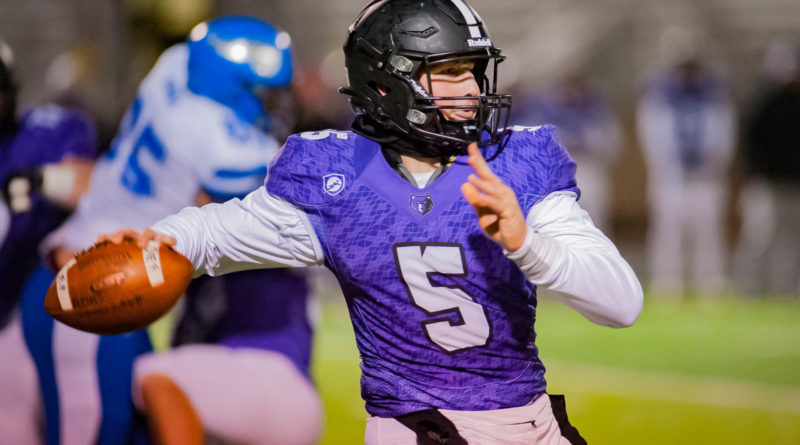 MERIDIAN — Rocky Mountain found itself in another early hole on a breezy evening at Brighton Stadium.

One week after erasing a 7-0 deficit against Highland, the Grizzlies trailed Coeur d’Alene by two touchdowns just 5 minutes and 14 seconds into Friday’s Class 5A state semifinal. Rocky Mountain needed a spark, and the Grizzlies’ playmakers were again up to the task.

Jordan Erickson hauled in three first-half touchdown passes and the Rocky Mountain defense buckled down, holding the visiting Vikings scoreless over their final eight possessions. Kobe Warr and Arthur Williams added fourth-quarter rushing touchdowns as the Grizzlies punched their ticket to the final with a 36-21 victory.

“We haven’t been here since sophomore year,” Rocky Mountain senior linebacker Ty Tanner said. The Grizzlies won the 2018 state title and fell to Rigby in last year’s semifinals. “We’re really excited and ready to go back to work.”

Coeur d’Alene (8-1), which won its first eight games by an average of 36.8 points, appeared headed toward another romp after a lengthy bus trip south.

“The beginning was really, really scary,” Grizzlies head coach Chris Culig said. “They jumped all over us. … It was like we took a bunch of shots there in the first round and were up against the ropes.”

Erickson, who caught two long touchdowns in last week’s win, flipped the momentum with a 75-yard touchdown reception. He added another later in the opening quarter and made it 23-21 midway through the second with a 67-yard catch-and-run after a Vikings trick play score.

It was a Randy Moss-esque first-half line for Erickson, who headed to the locker room with three catches for 173 yards and three touchdowns.

“He’s one of the best athletes in the state, if not the best athlete,” Warr said of Erickson, an all-purpose back who also rushed for a team-high 58 yards on 10 carries. “No one has really guarded him this year. He’s very trustworthy. If I put the ball up, he usually comes down with it.”

Added Tanner: “Jordan Erickson, this team would not be what it is without him. Jordan is the hardest worker I’ve met in my life and one of my dearest friends. He’s all about football. He loves the game, he lives it, and that’s why I look up to him.”

Despite Erickson’s exploits, Prka had the Vikings in position to regain the lead late in the second quarter. Coeur d’Alene dialed up a perfect screen pass for Giulio, but the senior coughed it up just short of the goal line and Michael Riddle pounced on the ball in the end zone for a touchback, protecting Rocky Mountain’s 23-21 advantage.

After a scoreless third quarter, the Grizzlies had another big defensive stand on the first play of the fourth, stuffing a quick-snap Prka dive play on fourth-and-two from the Rocky Mountain 30.

“They have a special little play where they bring a bunch of guys in and they get real close, and we had practiced the jumbo package and we had a call which was an all-out blitz,” Culig said. “Everyone was wanting me to call timeout to stop and I was like, ‘No, let’s stay with this all-out blitz.’ And that was huge.

“In (the 2018 semifinals) they had momentum in the first half, and they went for a fourth-and-three, kind of the same thing. They ran a sneak and Garrett Beck hit the guy behind the line of scrimmage and stopped him. We got the momentum and went, so it was similar to that.”

Rocky Mountain, a semifinalist for the eighth consecutive season, went up 29-21 on the ensuing possession when Warr scrambled for a 14-yard touchdown on third-and-seven. Warr, who is better known for his arm than his legs, rushed for 48 yards and completed 7 of 16 passes for 237 yards with three touchdowns and two interceptions.

“They brought a lot of pressure up the middle, so I bailed out the back side and there was no one there,” Warr said. “There were two defenders chasing after me, so I had to get in.”

“It was definitely the toughest (competition) that we’ve faced this year,” Garitone said. “I think we hung in there the entire time. At the end some stuff happened, we might’ve fallen apart a little bit, but the whole entire game we were in it. I don’t think they were the better team, I just think some stuff happened. But it was fun and it was a good game.”

Prka completed 22 of 41 passes for 249 yards with two touchdowns and two interceptions. Coeur d’Alene ended the game with just 72 yards rushing on 24 carries. Rocky Mountain ran it 44 times for 165 yards.

“I feel like it was a really good team effort tonight and we all played solid,” Tanner said.