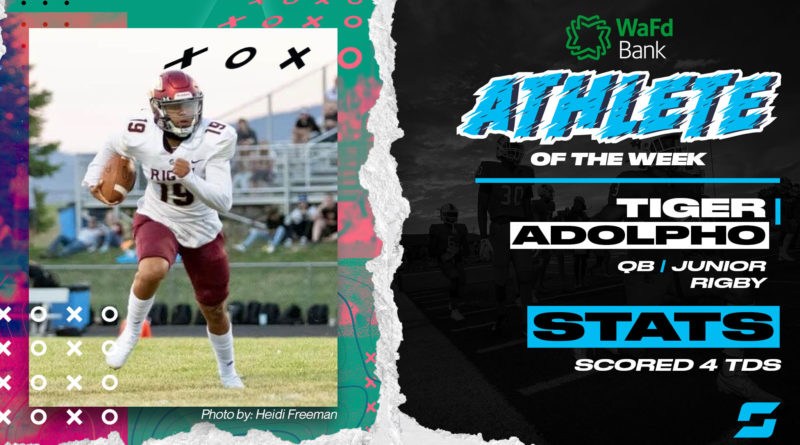 Adolpho scored four touchdowns — two on the ground and another two through the air — in a 35-28 playoff win over Eagle on Nov. 6. (READ MORE)

We are currently accepting WaFd Bank Athlete of the Week nominations for the week of Nov. 9-15. If you would like to nominate an athlete, please email regan@scorebooklive.com or tag us on Twitter or Instagram at @sbliveid.

And here are the other athletes who were nominated for Nov. 2-8:

Gabe Bacon, Capital WR: Scored on both sides of the ball, recovering a fumble in the end zone in the first half and catching another touchdown at the end of the first quarter, according to The Idaho Press-Tribune.

Gerrit Cox, Sandpoint RB: Rushed for a game-high 145 yards on 22 carries – 130 coming in the second half as Sandpoint beat Moscow in the 4A quarterfinals. (READ MORE)

A.J. Edwards, Rocky Mountain LB: Returned an interception for touchdown to give Rocky its first lead in a 29-13 win over Highland. (READ MORE)

Quintez Evans, Mountain View RB: Rushed 19 times for 101 yards and two touchdowns, as the Mavericks beat Capital to advance to the 5A semifinals.

Heath Owens, Kimberly QB: Passed for 282 yards and two touchdowns, including the game-winning 54-yard strike to Gatlin Bair with under a minute to go in win over Snake River. (READ MORE)

Kaimen Peebles, South Fremont QB:Completed 19 of 25 passes for 279 yards and four touchdown passes, including game winner to Cooper Hurt with four minutes to go in win over No. 1 Gooding. (READ MORE)

Isaak Plew, Nampa QB: Threw for 227 yards and a touchdown in the team’s loss at No. 1 Skyline.

Abrahn Silverio, Skyline RB: Turned 12 carries into 127 yards and two touchdowns in a 42-21 win over Nampa.

Jackson Stampfli, Eagle RB: Busted out a 74-yard touchdown run on the second play of the game from scrimmage, and nearly surpassed the 100-yard mark on touchdowns alone, adding a tying 24-yard touchdown run in the fourth quarter of a 35-28 loss to Rigby. (READ MORE)

Brady Power, Dietrich QB: Power had 291 yards and 5 TDs passing as well as 124 yards and another score rushing in the Blue Devils’ 60-42 win over North Gem.

Gabe Matthews, Declo QB: Rushed for a game-high 240 yards and four touchdowns as the Hornets racked up more than 500 rushing yards in win over Melba.

Josh Reeder, West Side DB: Intercepted two passes on defense, and rushed for 63 yards and a touchdown in West Side’s win over Grangeville.

McKean Romriel, Century QB: Was efficient in a victory over Bishop Kelly, completing 15 of 18 passes for 207 yards and a long touchdown to Bruin Fleischmann.

Taze Stegelmeier, West Side LB: Recorded a game-high 19 tackles, including two fourth-down stops in the team’s victory over Grangeville.

Caden Young, Emmett QB: Rushed for 179 yards and two touchdowns, and passed for two more scores in the Huskies’ 4A quarterfinal win over Blackfoot.