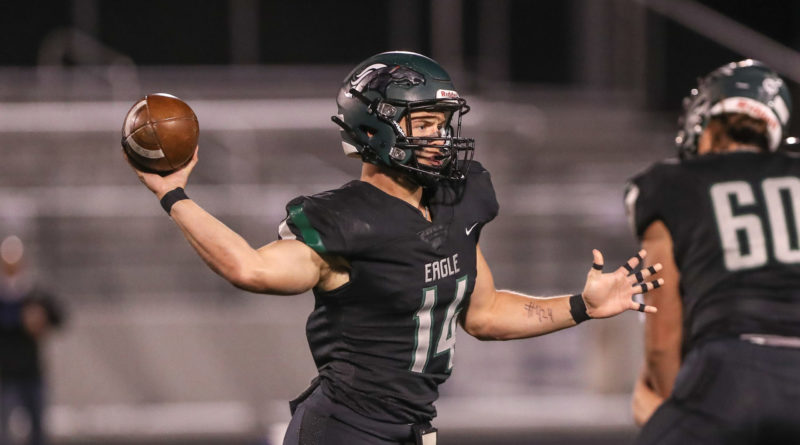 Ben Ford was gassed. He’d just led a valiant fourth quarter comeback effort that fell short. After losing by a touchdown to Rigby in the 5A state quarterfinals, Eagle’s do-it-all quarterback’s high school football career was over. It was then, tears running down his face, he hugged his mom, crying, and told her just that.

I want to play football. I don’t want to move on and be done. I want to keep playing.

For Ford, one the most electric football players in the state of Idaho, the realization was a breakthrough in a long deliberative process. And it came nearly a year after he committed to play baseball at the University of Washington.

“I think that’s probably the major thing I’ve realized the last couple weeks, is where my heart is,” Ford said.

“The ultimate goal would be to play baseball and football after high school, that would be incredible. But if I had to pick one right now, I don’t know for sure, but I’d probably lean football.”

Though a Division I baseball prospect, Ford played his way into several college football scholarships. As a sophomore he was tapped to play quarterback, a position the 5-foot-11 speedster had never played. He was comfortable as a wide receiver and defensive back.

He grew to love playing quarterback and feels learning the position, and its many requirements, helped foster a deeper love for the game. He had to learn about every position on the field. And studying defensive backs as a quarterback helped him see the game differently as a DB himself.

That passion for the sport only grew after he suffered a torn anterior cruciate ligament, sidelining him for the second half of his junior season. Watching his teammates from the sidelines lit a fire within him — one he didn’t realize he had until his senior season.

“Being hurt, watching those guys play, I didn’t want to be that guy,” Ford said, “and I think I took it for granted a little bit when I was out there. I just love the game a lot more than I did a year ago.”

John Hartz first learned about Ford’s intensity when Ford was a freshman. In the middle of a game, when one of Ford’s teammate made a costly mistake, Hartz watched as Ford became animated and overcome with frustration — “he was beside himself,” Hartz said. That’s when Hartz, who would go on to become Eagle’s head football coach during Ford’s senior season, first learned of the competitive drive that would one day fuel his varsity team.

“He just has this intense desire to be better and be successful,” Hartz said. “He didn’t yell at the kid or anything because he’s always a good leader, but I can remember the frustration. Almost a coach-type frustration about a missed execution from another player.”

“I didn’t start playing baseball until I was 12,” said Ford, who is an outfielder. “I always played football, dreamed of being a football guy in college. Then baseball came along and there as just so much opportunity at first and I just saw a great opportunity.”

Instead of choosing between the several offers in multiple sports, Ford wonders whether or not he has to. Can his dream scenario of playing both sports at a Division I level — albeit a rare combo — come to life?

Colleges liked what they saw on the diamond, as well as the football field. Programs like Idaho and Idaho State offered Ford as an athlete after his sophomore year. But with an offer from Washington’s baseball team on the table, Ford committed to the Huskies in Nov. 2019, shortly after the conclusion of his junior season.

“I wanted a plan,” Ford said. “And UW is a great school in a place that I’ve dreamed of going to be an athlete since I was young. That opportunity was something I didn’t want to pass up.”

Washington’s football team told him he could walk on and play, but the baseball team wouldn’t honor his 60 percent scholarship offer, because of the amount of the year he would have to miss to play football, which made sense to Ford. Army offered him as a run-first quarterback. Boise State also entertained him as a preferred walk-on. Boise State and Washington want him more as a slot receiver or a safety, which he’s open to.

“I hope one of those two can shoot me an offer,” Ford said. “That would be incredible.”

If he decided to only play football, it wouldn’t surprise opposing coaches, who have had to game-plan for his nightmarish read option, which he executed to near perfection with Eagle running back Jackson Stampfli.

“I have a lot of respect for (Ford), he’s one of the best high school football players I’ve seen in a long time,” Rigby coach Armando Gonzalez said.

What the future holds for Ford is not quite clear, even to him. What is clear is he will have options.