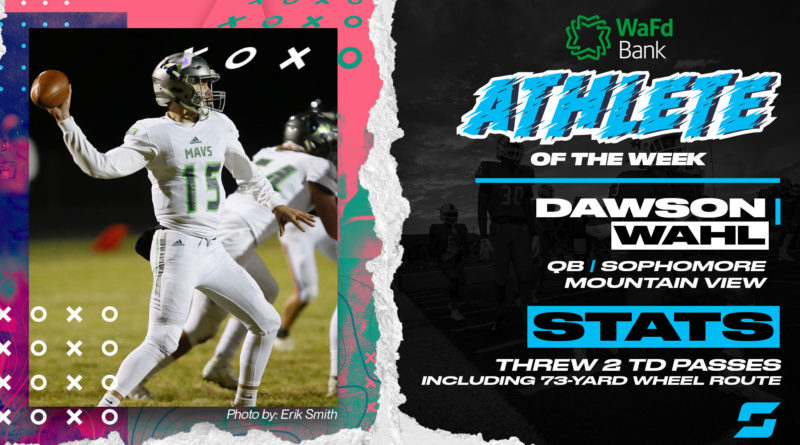 Wahl stepped in during the second quarter of Mountain View’s 44-41 thrilling win over Post Falls and threw two touchdown passes — including a back-breaking 73-yard wheel route in the fourth quarter — and ran in another. (READ MORE / PHOTOS)

We are currently accepting WaFd Bank Athlete of the Week nominations for the week of Nov. 2-8. If you would like to nominate an athlete, please email regan@scorebooklive.com or tag us on Twitter or Instagram at @sbliveid.

And here are the other athletes who were nominated for Oct. 26-Nov. 1:

Matt Almgren, Watersprings RB: Had a 65-yard touchdown reception on the first play of the game. And ran for 231 yards and four touchdowns on 13 carries The Idaho Falls Post Register.

Jaxon Buck, Eagle WR: Caught six passes for 78 yards and a touchdown in a 49-0 win over Thunder Ridge, reports The Idaho Statesman.

Elok Christoferson, Sandpoint K: Kicked a 25-yard field goal in the fourth quarter to lift the Bulldogs over Hillcrest in a 4A state playoff opener.

Kaleb Demuzio, Highland RB: Rushed for a season-high 242 yards on 39 carries and a touchdown in a 5A playoff win over Meridian. (READ MORE)

Lance Hanna, Nampa PK: Booted a game-winning 42-yard field goal in the final seconds to beat Middleton in the 4A playoffs. (READ MORE)

Hunter Howerton, Horseshoe Bend RB: Ran for 152 yards and two touchdowns in a 34-28 win over Castleford, per The Idaho Statesman.

Ja’Vonte King, Blackfoot WR: Caught six passes for 104 yards and a career-best four touchdowns as the Broncos beat Vallivue in the 4A playoffs.

Taylor Marcum, Timberline RB: Rushed for a game-high 226 yards and all four of his team’s touchdowns in a 5A playoff win over Skyview, all with a club-like cast on his left arm.

Jrew Plocher, Watersprings QB: Completed 7 of 13 pass attempts for 281 yards in the air, 103 rushing yards and four touchdowns in a 1A-D2 opening round win over Hansen, reports The Idaho Falls Post Register.

Dalan Thompson, Jerome QB: Passed for 289 yards and a touchdown in a 4A playoff loss to Moscow.

Kooper von Brethorst, Weiser WR/DB: Hauled in a Brett Spencer pass in the first half, and had two second-half interceptions in a 3A playoff win over Fruitland. (READ MORE)

Camden Young, Skyview WR: Had seven catches for 114 yards, and a touchdown in a 5A playoff loss to Timberline.

Lane Hanson, Moscow RB: Rushed for a game-high 111 yards and two touchdowns as the Bears racked up 300 rushing yards in 4A playoff win at Jerome.

Westyn Smith, Emmett RB: Rushed for 144 yards and three touchdowns – and had team-high 13 tackles in win over Minico.