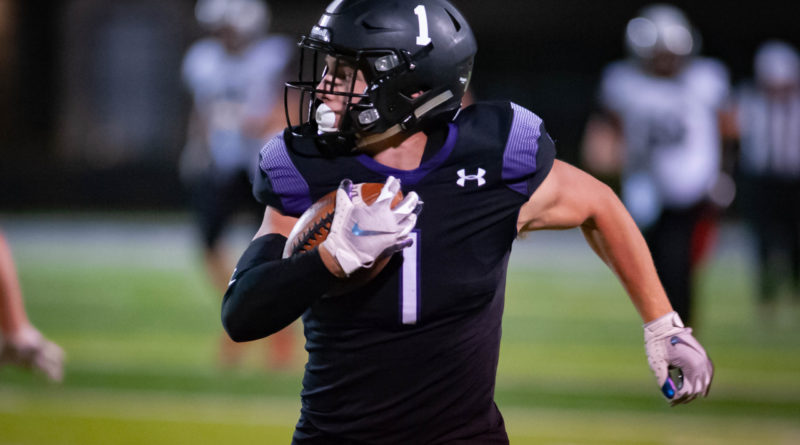 MERIDIAN — Jordan Erickson and an opportunistic defense were the difference for Rocky Mountain in Friday evening’s Class 5A Idaho state quarterfinal.

The Grizzlies hopped on a botched lateral and intercepted three passes, returning the second for a touchdown late in the first half. While the defense wreaked havoc, Erickson caught two long touchdowns from quarterback Kobe Warr that took the air out of visiting Highland.

The momentum-swinging plays lifted Rocky Mountain to a 29-13 victory and the program’s eighth consecutive trip to the state semifinals.

“It comes back to that spark,” said Erickson, who finished with four catches for 188 yards. “After one big play it just keeps rolling, on the offensive and defensive side.”

Rocky Mountain (7-0) needed a spark after Highland (8-3) received the opening kickoff and marched 65 yards on 10 plays — all runs — to go up 7-0. Quarterback Easton Durham finished the drive with a one-yard run on third down, and the Rams appeared to be in control heading to the second quarter.

Xander Nawahine delivered the first big play for Rocky Mountain, intercepting Durham inside the Grizzlies’ 10. Moments later, Warr hit Erickson on a play-action pass up the left sideline for a 74-yard touchdown to tie the score.

Pocatello’s Highland had a chance to regain the lead in the closing minute of the half, but A.J. Edwards intercepted a screen pass and showed a nose for the end zone with a nifty 35-yard return. The subsequent two-point conversion made it 15-7.

“I saw the O-line start moving out, so I was like, ‘Oh, that’s got to be a screen,’” said Edwards, a junior linebacker.

“It was amazing. I just knew it would be a change of momentum for us to pull out this game.”

After the teams exchanged punts to begin the second half, Rocky Mountain dialed up the same pass play to Erickson. The senior all-purpose back was open again, resulting in an 85-yard catch-and-run score.

“In practice he’s insane, and watching him play is even more insane,” Edwards said of Erickson. “He’s amazing and definitely a big leader on our team.”

Added Rocky Mountain head coach Chris Culig: “In my opinion, he’s one of the best wide receivers in the league. And he’s one heck of a running back, too.”

The Grizzlies turned another interception into Maxwell Lehman’s two-yard touchdown dive to make it 29-7 late in the third. Second-string quarterback Jack Whitmer gave Highland some life with a 27-yard touchdown scramble, but time ran out on the comeback attempt.

Durham ended 10 of 18 for 98 yards with three interceptions. He carried 13 times for 79 yards and a score, and star tailback Kaleb Demuzio, who had 242 yards in last week’s win over Meridian, ran 18 times for 73 yards.

“Coming into the playoffs and you know you’re playing against a good team, a great team, you’ve got to execute, and we just couldn’t do it,” Demuzio said. “We turned the ball over and messed up plays, and that’s all she wrote.”

Warr spread the ball to five receivers, completing 11 of 18 passes for 236 yards with two touchdowns and no interceptions. The Grizzlies mustered 50 rushing yards on 23 carries, but a plus-four turnover margin made up for it.

“Their D-line is awesome,” Culig said. “(Luke Togiai) and (Logan George), they’re great. We knew it would be tough, hard work … and we’d have to throw the ball, and we feel good about our wideouts.”

The Grizzlies and Rams were state semifinalists a season ago, falling to Rigby and Coeur d’Alene, respectively. The two programs met in the 2018 state final, with Rocky Mountain eking out a 24-22 victory.

For Highland, a historic power with 11 state titles, the 2020 season will be one to remember.

“It’s been so odd,” Demuzio said. “It’s great that we got to play this whole season. I mean, I didn’t think we were going to make it all the way through with the coronavirus, but I’m so grateful for my coaches and my teammates. We just all battled together and did the right things. We wore masks when we needed to wear masks, did the right things and just kept pushing along one week at a time. That’s what we started off with and we made it 11 weeks, so that’s pretty awesome. We’re probably one of the only teams in the nation that got 11 games under our belt.”

Rocky Mountain has at least one more game to play during the COVID-19 pandemic. The Grizzlies will face Coeur d’Alene (8-0), a 56-7 quarterfinal winner over Timberline, in next week’s semifinals.

“It’s going to be tough competition, but hopefully we’ll come out on top,” Edwards said.