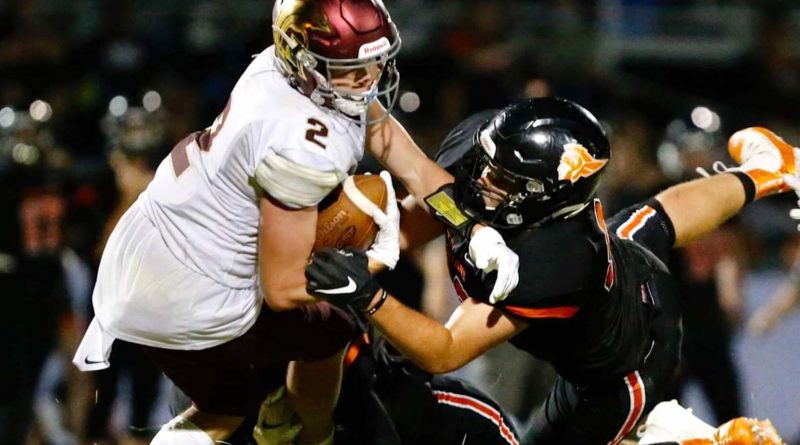 After all, the Trojans, the defending 5A state champions, are headed back to the state semifinals.

Adolpho threw two touchdowns — both to senior wideout Colton Edwards, who  — ran in another and played a masterful game manager to fend of Eagle’s fourth quarter theatrics in a 35-28 home victory Friday night, booking a semifinal matchup against Mountain View next week.

“The kids just stuck with it,” Rigby coach Armando Gonzalez told SBLive. “They didn’t panic, nobody panicked and we just kept playing football.”

It’s the second consecutive year Rigby has beaten Eagle in the state quarterfinals. A year ago, that state title Rigby team was led by mostly seniors.

This time around it’s a new cast of characters, paced by Adolpho, a cool-handed transfer from Hawaii, whose steady game management made the Trojans offense difficult to slow.

But try did the Mustangs ever.

Eagle’s offensive fireworks began on the second play from scrimmage when running back Jackson Stampfli burst up the middle for a 74-yard touchdown run.

“I told the kids coming into the game we’re going to have to limit those big plays,” Gonzalez said. “They got a few more than I would have liked.

Even after Rigby went up two touchdowns on a 36-yard pass from Adolpho to Edwards with under six minutes left, the Mustangs persisted through a late 4th and 10 conversion to keep a game-saving drive alive and brought the game back within a possession with a 27-yard touchdown catch by an outstretched Jaxon Buck in the endzone on 4th and 20 with 3:23 to play.

Just as Ford has lit up opponents for more than 1,000 yards rushing in a season shortened by COVID, he did much of the same Friday night, breaking off 20-plus-yard runs left and right. In total, he rushed for more than 100 yards.

“I have a lot of respect for (Ford), he’s one of the best high school football players I’ve seen in a long time,” Gonzalez said. “The kid flat our flew, but he wasn’t going to beat us with his arm.

And while he overthrew several deep balls early, the University of Washington baseball commit threw two touchdown passes in the second half — a 23-yard strike to Cannon Morgan in the third and his final scoring heave to Buck.

It wasn’t until a final fourth down with seconds left when a Rigby defensive back caught a ball that popped out of an Eagle receiver’s hands and ran it back to the Mustang one yard line, setting up Adolpho’s final kneel.

Edwards’ two-touchdown night came as a welcome re-entry into the lineup.

Doctors told Edwards he shouldn’t be able to walk after suffering multiple fractures in his fibula Sept. 4 against Post Falls — “he doesn’t know how he’s doing it with no pain,” Gonzalez said.

With Edwards and wideout Trajen Larsen both back at full speed from a leg fracture, undefeated Rigby feels it’s kicked into yet a higher gear.

“We’re back close to full speed offensively,” Gonzalez said, “it’s the perfect time to do so.”

Starting 1-4, this Bulldogs’ team full of sophomores was on the brink of disaster.

Now they are on the brink of playing for a Class 4A state title.

The turnaround has been remarkable, and Sandpoint added to it Friday night with a convincing victory over its 4A Inland Empire rival at breezy Barlow Stadium.

Quarterback Parker Pettit threw for 110 yards and two touchdowns, and added a rushing score. And tailback Gerrit Cox rushed for a game-high 145 yards on 22 carries – 130 coming in the second half.

“It is fun to coaches they guys,” Knowles said.

Interestingly enough, that last loss might have given the Bulldogs a much-needed lesson heading into their rematch with Moscow.

“We played Lake City twice this year, and we beat them the first time, only to lose the second time,” Knowles said. “We got a taste of it, that just because we won once doesn’t mean we are going to walk out there and do it again.”

After stopping Moscow on its first drive, they went down and scored on Pettit’s 1-yard touchdown plunge at the 5:23 mark of the first quarter.

The lead grew to 14-0 on Pettit’s 11-yard scoring strike to Elijah Larson.

In the first half, Pettit completed all 15 of his passes – and was efficient managing the offense in windy conditions.

And the Sandpoint defense was all over Moscow, limited the Bears to just 15 yards of offense in the first half – and 108 for the game.

“Complimentary football was being played (by us) tonight,” Knowles said.

Cox put the game on ice with his 21-yard touchdown run with 6:51 to go, and the Bulldogs were on their way to stamping a semifinal showdown with No. 1 Skyline.

Diamondbacks coach Travis Hobson is the first to point out that long-term program credibility is earned, not given.

And ninth-ranked Century took a big step in gaining that Friday night.

Paced by a rushing attack that churned out 256 yards, the host Diamondbacks turned away the No. 2 Knights in Pocatello.

Century is now in the Class 4A semifinals for the first time since 2015.

Now as the Diamondbacks prepared for facing Bishop Kelly, they looked at the Knights’ active defensive line and immediately identified the team’s strength.

And then game-planned to go right at it.

“This offensive line is one of the best I’ve ever coached,” Hobson said. “I thought if we could get in there and leverages against one of their best unit, it would be demoralizing.”

By the time Century grabbed a 7-0 lead midway through the first quarter on Easton Millward’s 8-yard touchdown scamper, it had already racked up 125 rushing yards.

Millward added to it with his 5-yard score as Century opened the second half with a long drive that chewed up six minutes.

“(Running it) was a difference maker,” Hobson said. “It was a real big boon for the offense. And it opens up the passing game.”

Especially on the play of the game.

Protecting a 14-0 lead deep in his own end, Hobson said he wanted to call a conservative play on third down to set up a punt into the wind.

But when Bishop Kelly came up in press coverage on the Century wide receivers, the Diamondbacks cashed in. Quarterback McKean Romriell lofted a pass down the right seam to Bruin Fleischmann, who grabbed it in stride and finished off the 95-yard touchdown by outracing the Knights’ secondary.

“You cannot press him. He is too big and strong,” Hobson said.

Seth Knothe’s 1-yard touchdown run cut into Century’s lead, but the Diamondbacks put the game away on Myles Gifford’s 38-yard interception return for a touchdown with 5:17 remaining.

“We know as a program, to be a state contender, you have to go through Bishop Kelly,” Hobson said.

Don’t ask South Fremont coach Chad Hill how much sleep he’s gotten over the past few weeks. It has been very little.

But right now, he wouldn’t trade it for anything. His sixth-ranked Cougars are in the Class 3A state semifinals for the first time in school history.

To do so, they had to upend the top-ranked team in the state for a second time this season. In mid-October, they beat then-No. 1 and two-time defending state champion Sugar-Salem.

“A lot of people who have been around here know the battle we’ve had getting to the semifinals,” Hill said. “It is a big deal for our town, school and our program.”

Not surprisingly, the game came down to junior quarterback Kaimen Peebles making a play – and the South Fremont defense making a big stop in the final seconds at Madison High School in Rexburg.

Tied at 20-20, the Cougars faced a fourth-and-goal from the Gooding 5-yard line with four minutes remaining.

“We like to get Kaimen on the edge, and do bootleg stuff to isolate (receivers) Dallin (Orme) and Cooper (Hurt), and try and get them one-on-one,” Hill said.

Peebles found a streaking Hurt for the touchdown pass, his second score of the game.

Last week in a first-round game against American Falls, Peebles connected with Hurt on a fourth-and-20 play for a touchdown that proved to be big in a 27-23 victory.

“We definitely have a lot of confidence in Cooper right now,” Hill said. “Since the Sugar game, he has been killing it.”

Gooding would not go away, and drove to the Cougars’ 25, facing a fourth-and-7 to keep their season alive.

But South Fremont’s defensive line got just enough penetration to disrupt the play, and scrambling quarterback Kurtis Adkinson was stopped a couple yards short of the first down.

“Our dudes made plays,” Hill said. “Cooper had two fourth-down touchdowns. Dallin moved the chains all night long. And it all camd down to our defense getting a stop.

“For sure, there will be a big celebration tonight.”

Rich Bishop took a calculated gamble when he was promoted to the head job at Kimberly in 2013: Go away from the Wing-T offense.

He went to something with more versatility, and quicker-striking capability – the spread attack.

And thankfully Thursday night in this Class 3A quarterfinal playoff game, his offense knew exactly how to streak down the field in a short amount of time.

After the unranked Panthers took a 26-22 lead with 1:40 to go, the No. 3 Bulldogs had the biggest answer to save their season.

Kimberly (9-1) advanced to the state semifinals for the second time in the past three seasons.

Coaches throughout the state have talked about how scary it is to face Kimberly’s passing offense, led by the big-armed Owens and Bair (three catches, 103 yards against Snake River) and senior Brett Bronson (three catches, 102 yards, touchdown) lined up at wide receiver.

“Teams we play respect what we can do, and the athletes we have,” Bishop said. “When you have two speedsters (Bair and Bronson), and Quinn (O’Donnell) … it’s like, ‘What are they going to try and stop?’

And yet, Snake River was effective in mixing up coverages, forcing three turnovers and coming from behind to hold a late lead.

“We had confidence that the kids could execute,” Bishop said.

This offense’s chief playcaller is Simon Olsen, who was promoted from being the junior-varsity offensive coordinator a few years ago.

After Owens was sacked with 57 seconds to go, Kimberly called timeout. Olsen told his group he wanted to take a deep downfield shot.

The play was a “swap” route where Bair, who was lined up outside, and Bronson, switched areas to run vertical.

Bair got deep in the middle and broke off the route. He caught Owens’ pass, shook a defender and was off to the races for the score.

“He is a kid who wants the ball,” Bishop said.