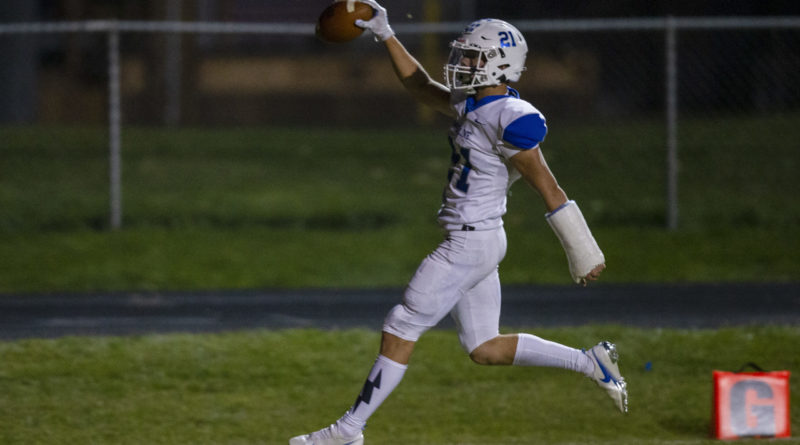 Here are the top performances that caught our attention across the state in the first round of the Idaho high school football playoffs. Did we miss anyone? Tag us on Twitter or Instagram @SBLiveID and let us know. Names are in alphabetical order. (Lead photo by Brian Losness)

Had a 65-yard touchdown reception on the first play of the game. And ran for 231 yards and four touchdowns on 13 carries The Idaho Falls Post Register.

Caught six passes for 78 yards and a touchdown in a 49-0 win over Thunder Ridge, reports The Idaho Statesman.

Kicked a 25-yard field goal in the fourth quarter to lift the Bulldogs over Hillcrest in a 4A state playoff opener.

Rushed for a season-high 242 yards on 39 carries and a touchdown in a 5A playoff win over Meridian. (READ MORE)

Booted a game-winning 42-yard field goal in the final seconds to beat Middleton in the 4A playoffs. (READ MORE)

Caught 18 passes for 182 and two touchdowns, including a 79-yard touchdown reception and two-point conversion to pull within three with 1:45 left. (READ MORE / PHOTOS)

Ran for 152 yards and two touchdowns in a 34-28 win over Castleford, per The Idaho Statesman.

Caught six passes for 104 yards and a career-best four touchdowns as the Broncos beat Vallivue in the 4A playoffs.

Turned 25 carries into 144 yards and four touchdowns in a 35-0 win over Pocatello, reports The Idaho Statesman.

Rushed for a game-high 226 yards and all four of his team’s touchdowns in a 5A playoff win over Skyview, all with a club-like cast on his left arm.

Tossed for 246 yards on 18 of 25 passes completed and four touchdowns, reports The Idaho Statesman.

Completed 7 of 13 pass attempts for 281 yards in the air, 103 rushing yards and four touchdowns in a 1A-D2 opening round win over Hansen, reports The Idaho Falls Post Register.

Took 21 carries for 218 yards and three total touchdowns: two receptions and one run, reports The Spokesman-Review.

Passed for 289 yards and a touchdown in a 4A playoff loss to Moscow.

Hauled in a Brett Spencer pass in the first half, and had two second-half interceptions in a 3A playoff win over Fruitland. (READ MORE)

Third string quarterback who stepped in during the second quarter of Mountain View’s 44-41 thrilling win over Post Falls and threw two touchdown passes — including a back-breaking 73-yard wheel route in the fourth quarter — and ran in another. (READ MORE / PHOTOS)

Had seven catches for 114 yards, and a touchdown in a 5A playoff loss to Timberline.

5 games you should not have missed in the first round