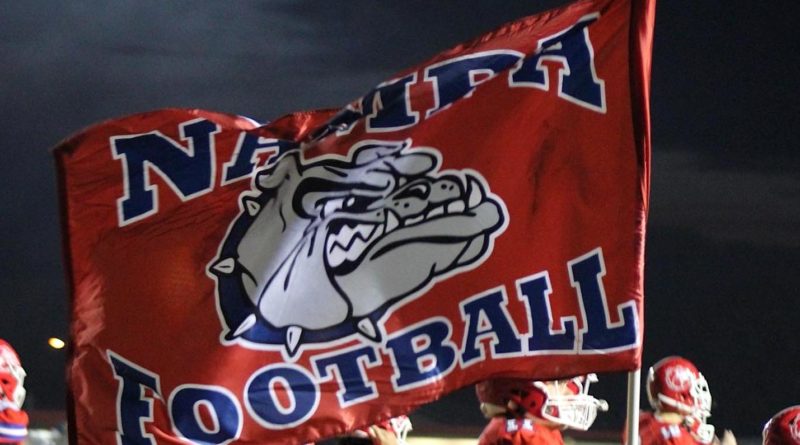 MIDDLETON — To Lance Hanna, it was “just another kick.”

The Nampa High School junior placekicker sent the Bulldogs to the quarterfinals of the 4A Idaho state playoffs by drilling a 42-yard field goal with six seconds remaining in a thrilling 44-42 first-round win over No. 8 Middleton Friday night.

“I love all of them, especially the seniors,” Hanna said. “This could have been their last game. But I won it for them. So they’re going on.”

Isaak Plew combined for 369 yards of total offense and four touchdowns. The senior quarterback went 17-of-26 for 208 yards and a score. He added 161 more yards and three touchdowns on the ground. Sophomore tailback Daniel Carrillo added 204 yards and a pair of scores. And senior wideout Colton Seable racked up 10 catches for 133 yards and a touchdown for the Bulldogs (6-2).

But the game’s hero was Hanna — a soccer player who had to be convinced to even play football this season by several of his fellow teammates.

The stage was set for him after the Vikings (6-4) took just their second lead of the game at 42-41 on a 5-yard run by Brock Phillips with 1:32 remaining. The score looked like it had sealed a dramatic comeback for Middleton, which on four separate occasions were down by double digits, including trailing 35-22 heading into the fourth quarter.

The Bulldogs, who just two weeks earlier lost to the very same team on the very same field by a score of 37-21, had other ideas, though.

They began the drive with just 1:27 left at their own 35-yard line. But Nampa got into Viking territory on its first play of the possession. Plew found senior wide receiver Jacob Butler on a 24-yard connection to set up 1st-and-10 at the Middleton 41. A 10-yard run by Carrillo and a 5-yard catch by Seable put the ball at the 25. After Plew’s heave to the end zone fell incomplete, Nampa appeared content to settle for the last-second field goal. The Bulldogs ran the ball to get it on the left hash for Hanna, who had shorted a 47-yard attempt by about 10 yards right before the half.

However, that miss, the Vikings’ attempt to ice Hanna with a late timeout and the hostile crowd didn’t faze him.

The snap was good.

The hold by Plew was good.

And Hanna booted it dead center. He ran towards the sideline in celebration even before the ball cleared the crossbar by about five yards.

“We were confident in him because he’s been a solid kicker for us all year,” Nampa coach Dan Holtry said. “He had a bad one in the first half, but he made up for it big time. I think it’s going to go down in the books as one of our all-time best kicks.”

The wild kick ended a back-and-forth fourth quarter, which featured four different lead changes in the final six minutes. The late-game dramatics actually didn’t seem like they were going to be necessary.

Nampa was at the Middleton 6 already up 35-22. But the Bulldogs turned the ball over on downs after Butler failed to corral a low pass in the end zone by Plew. Three plays later, Middleton’s Ky McClure hit Mason Nichols for a 58-yard touchdown pass to cut the deficit to 35-28. Nampa then punted for the first time all game on the ensuing drive. It allowed the Vikings to drive the length of the field again. McClure gave them their first lead of the game at 36-35 on a 3-yard run with 5:21 to go. But Nampa quickly went back up 41-36 on a 23-yard run by Castillo before Phillips’ late TD run set off a chain reaction for the Bulldogs, who have now won at least one playoff game in three consecutive seasons following an 8-year postseason drought.

“We had a lot of young guys this year and same with last year, filling spots that big players like Donavon Estrada and Jace Mann (had) last year,” Plew said. “… It’s awesome to see that this year and they’re doing a great job thus far.”

McClure totaled 453 yards of offense and five TDs. He completed 18-of-25 passes for 346 yards, four touchdowns and an interception. McClure was also his team’s leading rusher with 107 yards and a score. Junior Tyler Medaris tallied eight catches for 169 yards and two touchdowns for the Vikings, who lost in the first round of state for the first time in a decade.