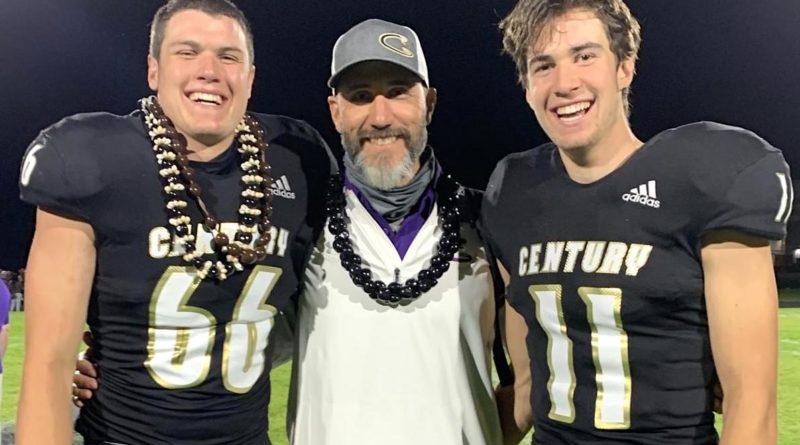 As a former college lineman, Travis Hobson’s eye for talent has a tendency to wander up, not down.

The Century High School quarterback job — vacated by graduated 3,000-yard passer Nathan Manning — came down to two juniors who grew to be close friends on the ninth-grade team: Bruin Fleischmann and McKean Romriell.

Since neither were pure pocket signal callers, Hobson’s initial thought was to go with the “airport” player — the team’s best-looking athlete in Fleischmann, who can touch a basketball rim with flying elbows when he springs in the air.

“In terms of measurables, Bruin jumps off the page,” Hobson said.

And yet, the best-laid plans for the Diamondbacks in their spread offense were the ones made after the team’s season-opening loss to two-time Class 3A champion Sugar-Salem.

Romriell was appointed the starter — and it has stayed that way for the remainder of the regular season.

And the team won its third 4A Great Basin title in a row, and open the state playoffs as the tournament’s third seed.

“I am a big man. I played on a college offensive line,” said Hobson, who played at Idaho State in the mid-2000s. “McKean is not a big dude.

“But in seven games, I have not seen him collapse once. He might throw an interception, and I will go to him and asked, ‘Are you good?’ And he says, ‘Yeah, why are you asking me that?’ He does not hear the noise.”

Yet, as much of a pleasant surprise as Romriell has been — he’s thrown for 1,751 yards and 21 touchdowns — this story is about the guy he replaced, who on this team is utterly irreplaceable.

Fleischmann comes from a football family: His grandfather, Ty Salness, was a strong safety on three Rose Bowl teams for the USC Trojans in the 1960s.

His father, Ryan, was a center at Idaho State. And his brother, Titan, who is a senior at Century, has given Montana State a verbal commitment as an offensive tackle.

Fleischmann can play virtually any position on a football field. But by his own admission, “because of my lack of experience at quarterback, I was just not ready for the starting role.”

With that said, it wasn’t his fault that Century lost in overtime to Sugar-Salem on opening night.

“I know I didn’t complete many passes,” Fleischmann said. “We ran the ball all night. And by the third and fourth quarters, they knew what we were going to do.”

Hobson said he met with his coaching staff two days after the game – on a Sunday night. There were terse exchanges over what the team’s next step should be.

“It was not the most pleasant staff meeting I’ve been a part of,” Hobson said. “There were an array of opinions. Ultimately, we collectively decided that Bruin needed to be in a position to get the ball.”

The next day, Fleischmann learned he was moving back to his familiar position – wide receiver.

One perk moving out of the quarterback position was that Fleischmann could also return to play on the defensive side of the ball as an outside linebacker.

“I was actually pretty relieved I could just play football again – tackle and do everything that I was comfortable with,” Fleischmann said.

Hobson utilizes Fleischmann in a number of ways – as an inside and outside receiver, teaming up with seniors Jovan Sowell and Emmett Holt. He also lines up at H-back. And he’s become a huge weapon in the team’s screen game.

Heading into the state playoffs, Fleischmann has caught 36 passes for a team-high 646 yards and 10 touchdowns.

“He is a dude, regardless of where he’s at,” Hobson said. “He opens up everything, honestly.”