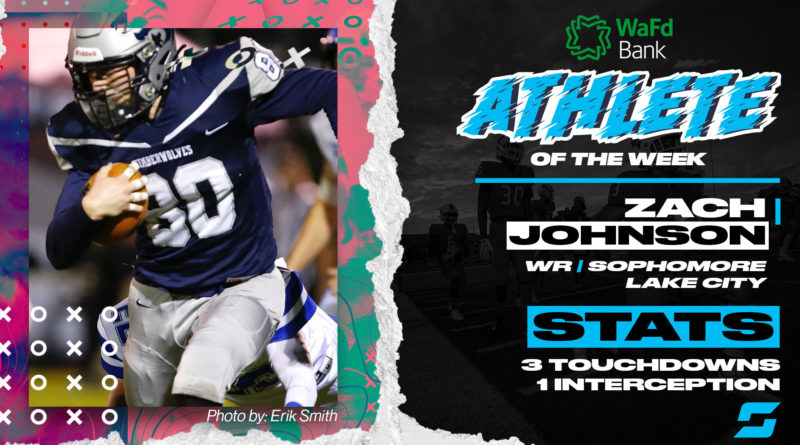 Johnson caught two touchdown passes from Chris Irvin, scored on a 68-yard reverse and made an interception in the end zone in the Timberwolves’ victory over Lewiston on Oct. 23.

We are currently accepting WaFd Bank Athlete of the Week nominations for the week of Oct. 26-Nov. 1. If you would like to nominate an athlete, please email regan@scorebooklive.com or tag us on Twitter or Instagram at @sbliveid.

Sean Austin, Kuna QB: Passed for 213 yards and two touchdowns in his final game as Kuna lost too Skyview.

Cooper Cooke, Teton RB: Had an interception, a 60-yard kickoff return and a 25-yard touchdown run in win over South Fremont.

Gerrit Cox, Sandpoint RB: Returned a punt 61 yards for touchdown to lift Sandpoint to 4A IEL title, playoff berth in a 6-0 win over Lakeland.

Jake Farris, Mountain View QB: Passed for 216 yards and two touchdowns, and added 68 rushing yards and a pair of scores in team’s win over Timberline.

Clayton Franssen, Skyview QB: Completed 17 of 26 passes for 212 yards and two TDs, and added 86 rushing yards and another score as the Hawks clinched a 5A playoff spot with a win over Kuna.

CJ Jacobsen, Rocky Mountain WR: Caught five passes for 103 yards and a touchdown in the Grizzlies win over Capital.

Westyn Smith, Emmett RB: Had two short touchdown runs (and 77 rushing yards), and sealed the Huskies’ 4A SIC-clinching victory with a late fumble recover in a win over Vallivue.

Brett Bronson, Kimberly WR: Caught eight passes for 133 yards and three touchdowns, and ran for another two scores in a loss to Gooding.

Jack Prka, Coeur d’Alene QB: Passed for 274 yards and four touchdowns in the snow as the Viks clinched the 5A Inland Empire title over Post Falls.

Owen Teuscher, Bear Lake QB: Passed for 210 yards and three touchdowns in a victory over Aberdeen.

Will Torman, Soda Springs DE: Registered five sacks in a win over Valley.

Hayden Kincheloe, Homedale RB: Rushed for 190 yards on 31 carries, scoring two touchdowns in the team’s win over No. 1 Fruitland.