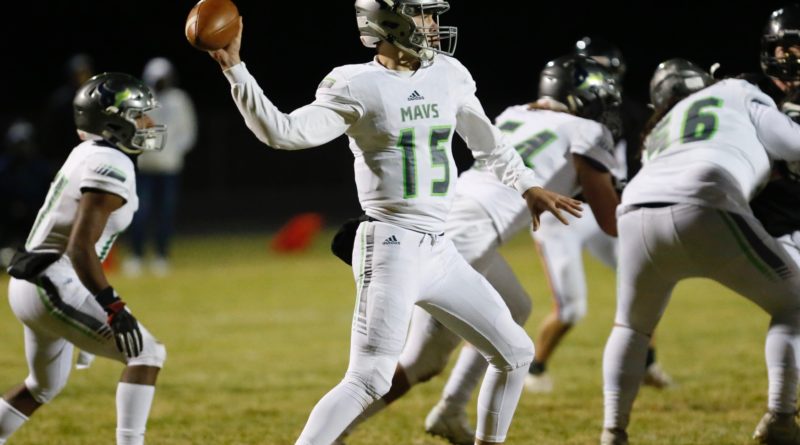 Dawson Wahl spent the season performing well enough as Mountain View’s JV quarterback that coaches saw a lot of promise in what he’d bring to the program down the road.

Surely they weren’t planning for the near future.

But when starting quarterback Jake Farris left the field with a head injury in the second quarter of Friday’s first round road game at Post Falls, a week after senior backup Johnny Kierce separated his shoulder, Mountain View turned to Wahl, a sophomore, to go win a playoff shootout. (Feature photo by Erik Smith)

Wahl accounted for three touchdowns, one on the ground and two in the air, to help the Mavericks (4-3) outlast Post Falls (4-4), 44-41, in the first round of the 5A state playoffs on Friday.

“Just a great kid that stepped in and really didn’t falter,” Mountain View coach Judd Benedick told SBLive. “The moment wasn’t too big for him.”

The Mavericks withstood five second half lead changes, foiled a late onside kick attempt and converted a game-clinching third down in the final minute to book a date with Capital in the 5A Milk Bowl quarterfinals next week.

Post Falls was paced by junior quarterback Jaxon Anderson, who tossed four touchdown passes — three more than 55 yards — and ran in another.

Wahl placed a pass on a wheel route just over an outstretched linebacker to junior Leyton Smithson, who took it 73 yards for a touchdown to give Mountain View its largest lead of the night at 11 with six minutes left.

“That was a big moment there where it’d been going back and forth,” Benedick said. “We needed something to happen and both of those guys made something happen.”

Post Falls, to its credit, clawed back until the very end.

The Trojans took their first lead of the game with 8:26 left in the third quarter. After Jaxon Anderson hit Cole Rutherford for a 56-yard touchdown pass, the Trojans recovered a fumble on the ensuing kickoff and punched in another touchdown to take a 27-24 lead.

A series after giving up a costly fumble on a kick return, Tommy Hauser took a pass from Anderson 79 yards and converted the two-point conversion to pull within three with 1:45 left.

“I thought Jackson overthrew that, and Tommy kicked it into another gear and got it,” Post Falls coach Blaine Bennett said. “Our players though that entire second half that we were going to win that game.

Added Benedick: “(Post Falls) was making plays. Guys making diving catching, going up and getting 50-50 balls. You could tell their kids wanted it. My hats off to them, they had us over a barrel there for awhile.”

Mountain View recovered the onside kick (“The onside kick was one bounce away from behind a good kick,” Bennett said.), but the Trojans stopped two consecutive runs to force third and long.

That’s when Wahl made the back-breaking play: a Wahl scrambled, rolled out under pressure and — to the horror of his coaches — threw across his body, across the field and found an open Smithson for a first down, setting up victory formation.

It’s no secret Gino Mariani loves putting the football in the air out of the spread formation – and has enjoyed great success doing so for many years as the Rams’ coach.

But this season is turning out differently.

And it’s a good time to have an all-state running back in the stable.

Senior Kaleb Demuzio rushed for a season-high 242 yards, and quarterback Easton Durham rushed for three touchdowns, and threw for two more as the fifth-ranked Rams survived at Iron Horse Stadium in Pocatello.

“(Demuzio) is going to be our guy going to the playoffs,” Mariani said. “He is a kid who can carry the team.”

For a half, eighth-ranked Meridian and quarterback Malakai Martinez matched the Rams (8-2) every step of the way. His third scoring pass with seconds remaining before halftime gave the Trojans a 28-21 lead.

But Highland turned to Demuzio on nearly play on its opening series of the second half. He tied the game at 28-28 with his 7-yard scoring run with 4:38 remaining in the third quarter.

“He has speed, but he also has a lot more than he did last year,” Mariani said.

Meridian’s offense could not getting anything going in the second half – and Highland countered with long, gut-wrenching drives for touchdowns. The Rams took the lead for good – 35-28 – on Durham’s 10-yard touchdown strike to Raimon Barela with 9:21 to go.

Up next for the Rams – No. 2 Rocky Mountain in the 5A quarterfinals.

“They are a good team … and their skill guys are excellent,” Mariani said. “This is kind of a fun rivalry, and we will show up next week.”

First-year Broncos coach Jerrod Ackley had been involved in all sorts of playoff settings – all around the country.

And how was his postseason debut experience in the Blackfoot home stadium?

“It was fun,” Ackley said. “The only thing I regret is we could not have a big crowd there. We have great crowds here, and we were held to 150 people (as a COVID-19 precaution).”

Jace Grimmett threw four touchdown passes, all to wide receiver Ja’Vonte King, and the third-ranked Broncos broke away in the second half against the No. 7 Falcons.

Standout running back Teegan Thomas rushed for 137 yards in the first half before being sidelined with an undisclosed injury.

Vallivue went 84 yards on 15 plays, and scored on quarterback Casey Cope’s 1-yard plunge on the final play of the first half to cut Blackfoot’s lead to 14-12.

But in the second half, the Grimmett-to-King combination stole the show.

The first second-half score came late in the third quarter on a Grimmett pass that looked like it was too far for anybody to catch.

Less than two minutes later, the duo was at it again, this time on a 25-yard connection for a 28-12 advantage.

“The wind was blowing pretty good, and we knew the third quarter was our time to be aggressive,” Ackley said. “Jace threw the ball really well … and Ja’Vonte won all the 50-50 balls.”

King finished with six catches for 104 yards and the career-best four touchdowns.

It had been nearly 30 years since Moscow had taken a long road trip to win a state playoff game.

It happened to be in 1992 when the Bears defeated Preston to win the A-2 title at Holt Arena.

Well, this Moscow group has something to tell is future family members, too, upending sixth-ranked Jerome in a 4A playoff stunner at Tiger Stadium.

The Bears forced six turnovers – starting on the first play from scrimmage when they recovered a Jerome fumble, and turned it into a 6-0 lead on Lane Hanson’s 5-yard touchdown run just 31/2 minutes into the game.

“That is a good football team that was coming off six wins in a row,” Moscow coach Phil Helbling said. “It was a long road trip, and not easy for the kids. But we did a good job keeping them focused.”

Moscow’s red-zone defense was particularly stout, recovering a fumble in the end zone for a touchback. Cody Isakson also picked off a Dalan Thompson pass in the end zone – and the Bears had a fourth-down stand at the goal line.

“It just feels great, to come down and play the type of football we knew we can play – and in such dominant fashion,” Helbling said.

Thompson did throw a 3-yard touchdown to Shayler Bingham with eight seconds remaining in the first half to cut the Bears’ lead to 19-7.

But on the visitors’ first series of the second half, they went to their big man – Utah commit Jonah Elliss.

Quarterback Chad Redinger delivered a pass to a streaking Elliss in the middle of the field, and the 6-foot-2, 210-pound tight end outraced everybody to the house on a 64-yard score just 66 seconds into the third quarter.

“He is a different specimen – strong, fast and physical,” Helbling said.

Jerome fumbled the kickoff, and Hanson scored his touchdown of the game two minutes later on a 4-yard run – and Moscow led 32-7.

Sometimes, even the ground-and-pound tractor offenses get stopped in their tracks.

The No. 8 Wolverines did just that, shutting out the fifth-ranked Grizzlies at home by forcing four turnovers and holding them to just 141 total yards.

But as standout quarterback Brett Spencer pointed out, all three phases have to be working to dominate a good team like that. And for Weiser, that is what happened.

“We are playing our best ball right now,” Spencer said.

Spencer threw a pair of touchdown passes in the first 16 minutes to give Weiser a 14-0 lead.

The Grizzlies went a quick three-and-out deep in their own end – and winced when the snap back to the punter never came close to him.

Willy Shirts scored on a 5-yard touchdown run, and the Wolverines were up, 21-0.

Spencer tossed his third scoring pass of the half at the 3:57 mark to his brother, Brock, and Weiser was in control, up 28-0.

The Wolverines had lost to this same Fruitland team, 18-15, in late September when many though the Grizzlies were on the short list of 3A state contenders.

And two weeks ago, they lost in the final seconds to Homedale, now the No. 1 team in the state.

“We know we can play with Sugar (Salem), Homedale or anybody,” said Spencer, who finished with 145 passing and rushing yards and four scores before leaving with a shoulder injury.

“This win means a ton for our confidence.”