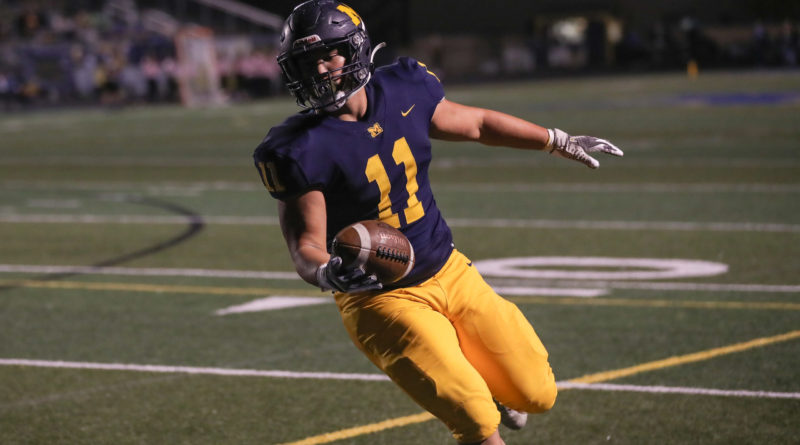 Here is an inside look at the top high school football games across the state of Idaho for the first round of the IHSAA state playoffs (Oct. 30):

Last state playoff meeting: These programs played in the first round of the 2011 bracket – won by the Rams, 36-25, in Pocatello. Highland forced three turnovers, and marched 88 yards late in the third quarter for a touchdown to take control of the game.

About the Warriors: When was the last time Meridian finished with a winning record and went to the postseason? It was 2011 when the Warriors lost that aforementioned playoff game. And while QB Malakai Martinez (1,401 passing yards, 16 TDs) and the offense have been pretty steady, the defense’s peaks (13 forced turnovers) and valleys (given up 706 rushing yards in losses to Rocky Mountain and Eagle) have been glaring.

About the Rams: Longtime coach Gino Mariani knows how to adjust to personnel – which is a big reason why Highland is in the 5A playoffs for a 10th consecutive season. He has a reliable all-around runner in record-setting RB Kaleb Demuzio (807 rushing yards, six TDs) – and will likely test the middle of that Trojans’ defense a ton Friday night to set things up in the passing game for either signal caller, Easton Durham or Jack Whitmer.

Last state playoff meeting: These two schools met in the 5A quarterfinals in 2018 – a game the Mavericks won at home, 57-0. Mountain View. Noah Bryant threw three touchdowns for Mountain View, which held the Trojans’ offense to less than 100 total yards.

About the Mavericks: On a three-game winning streak, what has been the biggest difference in Mountain View’s late turnaround? Better starts. In losses to Rocky Mountain, Eagle and Meridian, the Mavericks gave up 79 first-half points. In three wins, it has been 14. QB Jake Farris (1,106 passing yards, 10 TDs; 292 rushing yards, five TDs) should target game-changing WR Kayden Chan (35 catches, 578 yards, six TDs) often.

About the Trojans: Like Mountain View, they also have three losses coming into this matchup. All of them are to last year’s 5A finalists (two to CDA, one to Rigby). A lot of Post Falls’ success will be determined up front – protecting QB Jaxon Anderson (1,437 passing yards, 12 TDs; 268 rushing yards) on offense, and getting pressure on Farris by the likes of NG Nathan Crowell and DE Nick Chase on defense. This game has big-play shootout potential.

About the Bulldogs: Nampa played the Vikings on this field Oct. 16, losing 37-21 in 4A SIC action. QBs Isaak Plew (726 yards, 10 TDs; 278 rushing yards, two TDs) and Colton Seable (395 passing yards, five TDs; three receiving scores at receiver) were picked off three times in the lopsided loss. Middleton is suspect to a good rushing attack, and the Bulldogs will need to find one behind RB Daniel Carillo (260 rushing yards, three TDs) – and Plew.

About the Vikings: Longtime coach Bill Brock isn’t getting any younger in that pursuit of a 4A title. And even though he likes to see his “Air Raid” offense chuck it behind QB Ky McClure (1,890 passing yards, 19 TDs), Middleton has been more patient sticking with the run game in October with RB Brock Phillips, who rushed for 106 yards and four touchdowns in the earlier victory over Nampa.

Last state playoff meeting: On its way to winning its only 4A title in 1999, the visiting Falcons defeated Blackfoot, 12-6, in overtime in the first round.

About the Falcons: After jumping out to a 5-0 start, Vallivue lost two of its final three 4A SIC games. Now the Falcons get to face a program similar in game plan – stout defensively with a great run game. Except the Falcons do it more with power, led by DLs Braydon Ary and James Streit. Ary (20 TFL, including 10 sacks) could be the game’s X-factor – a mean, fast-twitched disruptor who moves all over to find matchups he can exploit.

About the Broncos: It is the postseason, which usually means deep runs by four-time state champion Blackfoot into November (including the 4A finals a year ago). This is also a time when the Broncos need to rely heavily on all-state RB Teegan Thomas (922 rushing yards, 10 TDs; 165 receiving yards). In what could be a low-scoring grinder, Thomas’ big-play splash could be the difference in advancing or staying home.

Last state playoff meeting: These two Snake River Valley rivals met in the 2011 state semifinals. The Grizzlies won at home, 10-7, before losing to Snake River (then coached by current Weiser coach Tom Harrison) in the 3A finals. Fruitland’s victory was part of a 13-game winning streak in the series that was snapped last season.

About the Grizzlies: Make no mistake, Fruitland is the favorite in this matchup as arguably the best team in the state. Its line, led by RT Weston Jeffries and RG Greg Gissell, both three-year starters, is massive and can wear defenses down. But RB Jacob Walker (576 rushing yards, 12 TDs) and QB Luke Barinaga (288 rushing yards, eight TDs) have to finish the job with the football in their hands in this tense rivalry rematch.