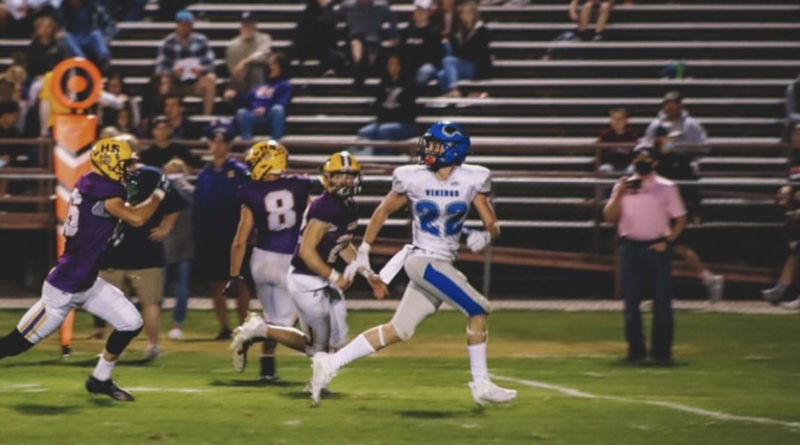 COEUR D’ALENE — The roadmap was clear.

Get your playing weight to around 170, 180 pounds, Montana State coaches told Tyson Pottenger, and we’ll start recruiting you. Heralded by his Coeur d’Alene coaches and teammates as their quarterback on defense, Pottenger knew neither his football IQ, nor understanding of the game were lacking.

But physically, he had work to do if he wanted to play in the Big Sky. He played at around 5-foot-11 and 145 pounds as a junior, and would need to put on at least 30 pounds in one offseason.

“So that’s what I did,” Pottenger said.

The senior safety and wideout, up more than 35 pounds in weight and two inches in height not even a year later, savored the moment when he received an offer from Montana State in late September.

Pottenger significantly increased his daily calorie count — fueled in part by a protein-rich daily formula — and hit the weights five days a week to pack on the pounds. His regimen started as soon as the Vikings lost to Rigby in a 57-56 shootout in the 2019 5A state championship.

To Pottenger, getting his body in a place that allowed him to compete at the collegiate level was the final piece of a puzzle he’s been putting together since his eighth grade year.

It was then it began to click that as a skinny, oft-undersized player, his key to success was to master his understanding of the game.

“I took it really seriously, because my whole life … I’ve wanted to be a college football player,” Pottenger said. “So I knew that I needed to start early, and just get in the right mood. Because I noticed the best safeties are always guys that know what’s going on every play and can help, they’re going to help their whole entire defense on every play. I just feel like that’s what I take pride in, is making sure that all of our guys know what they’re doing on every play.”

Pottenger’s leadership began to take form his junior year, when he was thrust into a larger role on the field and in the locker room for the junior-heavy Vikings.

“You might as well give him a whistle,” Coeur d’Alene coach Shawn Amos said before the season. “He could coach for us right now. Instincts, anticipation, he knows the game so well.”

And they needed his leadership. In the 2019-20 season, Coeur d’Alene challenged itself early with opponents like Rigby — who it beat in its season-opener but went on to lose to in the state title game — Gonzaga Prep (Wash.), Mead (Wash.) and Highland before running to a 5A Inland Empire League title and finishing second in state.

It was the perfect proving ground for Pottenger’s leadership. And players say cutting their teeth against a tough schedule was crucial to being ready for the playoffs.

This year, a difficult schedule was shaved down in the fallout of COVID-19, and Pottenger believes that puts the onus on the team to stay extra sharp through a regular season in which the Vikings (6-0) have won each game handily.

His duties have expanded in the Vikings offense, too. In their Week 8 win over Lake City, he threw a 42-yard wide receiver pass to teammate Ethan Garitone (20-second mark below). He also had an interception to set up a touchdown in the same game.

As Pottenger has grown as a leader, teammates have taken notice, too.

Senior linebacker Luke McLaughlin has played with Pottenger for about as long as the two have played football. McLaughlin says Pottenger is dependable not only to make the right play, the right read, but also to know the rest of his team’s reads, too.

“That kid’s a brainiac,” McLaughlin said. “He can call anything out on that football field. He’s someone you look to, ‘what’s the play?’ ‘What’s the call?’ With coverage, and all these other things, Tyson’s reliable.”

And at 6-foot-2, 180 pounds, he’s proving he’s ready to reach his goal of playing college football. But first, his eyes are set on bringing top-ranked Coeur d’Alene its fifth 5A state title.