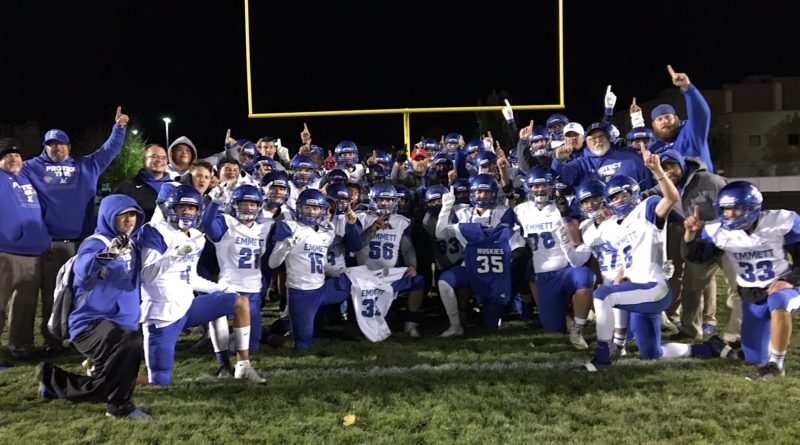 So after addressing his team, the Emmett High School head football coach dropped to his knees and prayed. Senior linebacker Axel Sanchez kneeled right next to him and senior safety Jon Fleming hugged him while carrying the No. 35 jersey.

Twenty-four hours after tragically losing a teammate, the Huskies rallied late in the fourth quarter for a 21-17 win over Vallivue on Saturday night for the first 4A Southern Idaho Conference championship in program history.

“Somebody asked me, ‘Can the team withstand this?’ I said, ‘I’ll be honest with you, if they can go down and emotionally tie all that back together and win this game, they’re better men than me and I don’t deserve to coach them,’” Hargitt said. “This is 22 years of coaching for me, but this has been by far the most magical and special season I’ve ever been a part of.”

The game was supposed to take place a day earlier. But when the school announced Friday the death of one of its players, Vallivue graciously agreed to move its senior night. It also held a moment of silence before the game. Falcons’ senior defensive lineman Braydon Ary even wore a t-shirt underneath honoring the Huskies’ fallen player.

“The support meant a lot,” junior quarterback Caden Young said. “Our communities really came together in our time of need.”

Emotions continued to run high as Emmett captains Sanchez, Braden Anchestegui and Taylor Layne all carried the No. 35 jersey to midfield for the coin toss.

“That was absolutely a special moment,” Sanchez said. “He’s up there watching us now and I’m sure he’s happy.”

However, the Huskies (7-2 overall, 6-1 SIC) held it all in check, especially late in the fourth quarter where Hargitt admitted after the game, he was “all out of prayers.”

And justifiably so, Emmett’s “magical season” looked like it was going to come painstakingly short of a conference title. Hargitt didn’t know if his team would get the ball back after he punted trailing 17-14 with just 5:33 remaining in the game.

But then fate intervened.

The punt pinned the Falcons (6-3, 4-3) down at their own 5-yard line. They quickly went three-and-out and shanked a punt to give the Huskies prime field position at the Vallivue 25 with 3:57 still on the clock.

And then it happened.

Young rolled out to his left and heaved the ball to Jeff Lockett for the 25-yard game-winning touchdown pass with 2:43 left.

“You talk about the proverbial last arrow in the quiver, we were at the bottom of the call sheet man. We were running out of stuff,” Hargitt said while laughing. “But just God Almighty, what a tremendous freakin’ pass and catch. That ball hung in the air for about 10 hours.”

Senior halfback Westyn Smith, who scored the previous touchdowns on runs of 1 and 2 yards, respectively, sealed the improbable championship with a fumble recovery on the Falcons’ ensuing possession.

Hargitt actually admitted after the game he thought his team would go 0-9 this season in the very competitive 4A SIC with the likes of Middleton, Vallivue and of course, perennial powerhouse Bishop Kelly. But the Huskies beat all of those teams, including the Knights, to break a tie with them for the league title just two years after losing by an average of 36.7 points and a 1-8 season.

“Well, the 1-8 season was hard. It was one of those things where a lot of kids were like, ‘Nah, I’m done with this,’” Smith said. “But the true kids kept with it. They wanted to actually work and get better. So it’s nice having your work pay off.”

Emmett will now await its playoff seeding and first-round opponent. The Huskies and the state’s other four conference champs will be ranked No. 1 through No. 5 in the 4A playoff bracket. Based on the rankings as of Saturday night, it looks like Emmett will be no worse than a two seed when the brackets are announced Sunday.

The Falcons, who scored their points on a pair of 1-yard quarterback sneaks by junior Casey Cope and a 44-yard field goal by Ary, could be seeded anywhere from 6th to 16th.

(Editor’s note: The original version of the story incorrectly identified the recipient of the game-winning TD catch as Jack Maxwell. The catch was made by Jeff Lockett. The story was updated on Monday afternoon to reflect the correction.)