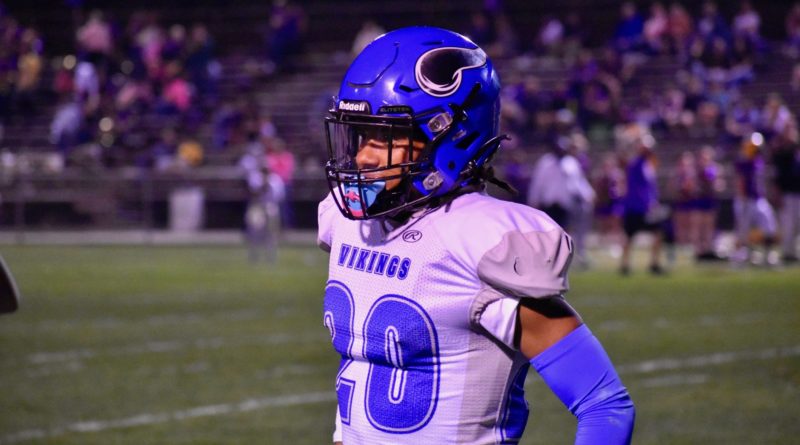 Whoever called for snow in October must have ordered a side of late-game fireworks.

After the final horn sounded, Sandpoint players ran around in circles in the end zone, diving back-first into the ground to do snow angels in the inches of powder that blanketed Lakeland High School’s football field.

The energy surrounding the Bulldogs’ thrilling 6-0 blizzard win over Lakeland to win an outright 4A Inland Empire League title and 4A state playoff berth Friday night was palpable.

Lakeland (3-4, 0-2) had the ball near the goal line with four second left when Sandpoint (3-4, 2-1) junior corner Cody Steiger knocked down a last-second throw from Lakeland quarterback Devon Suko, spoiling a drive that brought the Hawks within reach of the end zone, and the chance to force a potential league tiebreaker scenario.

“The play they ran was something that was kind of on our minds,” Sandpoint coach Ryan Knowles told SBLive Idaho. “Our corner picked it up perfect. The quarterback had to go to his second option. We were in great position.”

Now, the Hawks are on the outside looking in after Sandpoint grabbed the league’s only guaranteed playoff berth.

Sandpoint scored the lone touchdown of the night when running back Gerrit Cox took a punt return 61 yards for a touchdown with 26 second left in the first half.

“He’s a game-breaker,” Knowles said from a rowdy bus over the phone. “He’s just a stud. He took the game against Moscow last week by the horns, too.”

Defense prevailed on either side as neither team could score in the second half.

But boy, did the Hawks come close.

Facing 3rd and 10, Suko rolled out to the left and threw on the run across his body to junior receiver Alden Waddington to earn a fresh set of downs inside the Sandpoint 20 yard line as the clock crept under two minutes.

But the Bulldogs spoiled one endzone heave after another.

Not even a few inches of late-October snow – and a determined Trojans’ group – could prevent the top-ranked Vikings from clinching their fourth consecutive 5A Inland Empire title.

Quarterback Jack Prka helped Couer d’Alene overcome an early deficit with two touchdown passes right before halftime, and the Vikings locked up a first-round bye by defeating seventh-ranked Post Falls for a second time this season.

This one counted for all the marbles, and in weather usually reserved for early winter, not before Halloween.

The Trojans jumped out 7-0 on a blocked punt, scoop and return by Chase Berg midway through the first quarter.

Slowly, the Vikings worked their way back into the game – and erased the deficit with two touchdowns in the final four minutes of the first half.

“”We knew it was going to be a weird game,” Amos said. “But they did not panic.”

Quarterback Jack Prka gave them their first lead, 12-7, on a 48-yard pass to Trent Elstad.

They got the ball back two minutes later, and drove inside the Post Falls 10-yard line with 15 seconds remaining.

Prka connected with Ethan Garitone on a quick-hitting 8-yard touchdown pass, and Coeur d’Alene was up, 18-7 at intermission.

“You know, (passing in the snow) wasn’t as bad as you’d think. It was harder for the receivers to get their footing,” Prka said.

The Vikings will have one game in the state playoffs, but will be on the road if they reach the semifinals. Post Falls, making its fourth consecutive 5A tournament, will host a first-round game next week.

Hey. powerhouses of 5A football, guess who is in the state bracket?

It’s the smallest school in the classification – the Hawks.

A year after going 1-8 in its second year after the move up to 5A, 10th-ranked Skyview ended the reigning 4A champions’ season with a win-and-you-are-in road victory.

The Hawks earned the 5A SIC’s No. 3 seed, and will host a first-round game next week.

“We are, to a large degree, having a special season,” Skyview coach Dave Young said. “We’e had some hiccups and adversity, but the last few weeks, we’ve been on such a roll.”

Skyview moved up to 5A in 2018, and made the state playoffs that season. Since then, its student population has been shrinking, now down to approximately 1,100 (while the biggest 5A schools are up near 2,600).

On Friday night, Young suited up 27 players against Kuna – many of whom were sophomores on last year’s one-win squad.

“They remembered how that (1-8 year) felt, and we’ve been able to do something about it now,” Young said.

Skyview grabbed a 20-14 lead at the end of the first half by going 75 yards in the final five minutes, capped by Cade Salois’ 2-yard touchdown run.

The Hawks chewed up nearly six minutes to their opening drive of the second half. Quarterback Clayton Franssen had to big drive-saving moments, converting a third-and-15 (pass to Haydn Turner) and a fourth-and-1 (4-yard run).

And Franssen capped it with his 1-yard touchdown plunge to give the Hawks a 27-14 lead at the 6:13 mark of the third quarter.

“That broke their backs,” Young said.

Salois added another short scoring run early in the fourth quarter, and Skyview was well on its way back to the state tournament.

Matt Holtry had heard all season how the two-time defending 3A runners-up would take a significant step back this season.

On Friday, they took a huge stride forward by winning a third consecutive Snake River Valley District championship by taking down the top-ranked Grizzlies.

Hayden Kincheloe rushed for 190 yards and a pair of touchdowns, and the No. 6 Trojans forced three turnovers, turning two of them into scores as they built a 21-0 lead.

Homedale won its fourth game in a row over the Grizzles in the series.

“When I first came here 12 years ago, they called me crazy and said, ‘You’ll never win, and you’ll never beat Fruitland,'” Holtry said. “You know what, I do love the role of the underdog.”

Midway through the first quarter, Homedale’s John Breshears picked off Grizzlies quarterback Luke Barinaga to set up the Trojans’ first score – a 4-yard Kincheloe touchdown run with 4:16 to go.

Homedale just kept building on its lead, getting.two Jaxon Dines scores – one on a 53-yard strike to Mason Strong, and a 3-yard run – to take a 21-0 advantage into halftime.

Holtry said everyone around his program felt the statewide disrespect after two trips to the 3A championship game.

“We knew what these kids were capable of doing,” Holtry said. “And they came out and proved everybody wrong.

“Our program is a program. It’s not about one class, or a couple of athletes.”

It is a pretty safe bet that by the time Cameron Andersen arrived in 2009 as the Gooding coach, the nearby equipment shed wall was in need of a paint job.

The Senators have supplied all the color in the world to that old building now.

Andersen’s overtime decision to go for the two-point conversion – and victory – paid off Friday as quarterback Kurtis Adkinson rumbled in with the game-winning run for the No. 3 Senators, who won their eighth 3A Sawtooth Central Idaho title in the past 10 years.

And when they do clinch a league championships, the players get to paint their year on the wall.

“We call it, ‘Put It On The Wall,'” said Andersen, who said the school had not won a league title before his arrival in nearly three decades. “Our guys know what that means. They don’t want to be the year that is not up there.

“I had the spray paint ready.”

But first, Gooding had to survive a frantic Kimberly comeback.

The No. 2 Bulldogs tied it at 28-all midway through the fourth quarter on Heath Owens’ 65-yard touchdown strike to Brett Bronson.

It the “Oklahoma tiebeaker” for overtime, Kimberly faced a fourth-and-goal from the 12-yard line. But Owens found a streaking Bronson in the corner of the end zone on a fade pattern for a touchdown – and the Bulldogs kicked the PAT to grab a 35-28 lead.

What was Gooding’s overtime strategy? Andersen gave his offensive players the plan well in advance – with a few minutes remaining in regulation.

“I told them we were going to run ‘bunch’ every play, then go for 2,” Andersen said.

Adkinson ran on three plays in a row, scoring a touchdown on a 2-yard run. And he repeated the same play – with the same result – on the winning conversion.