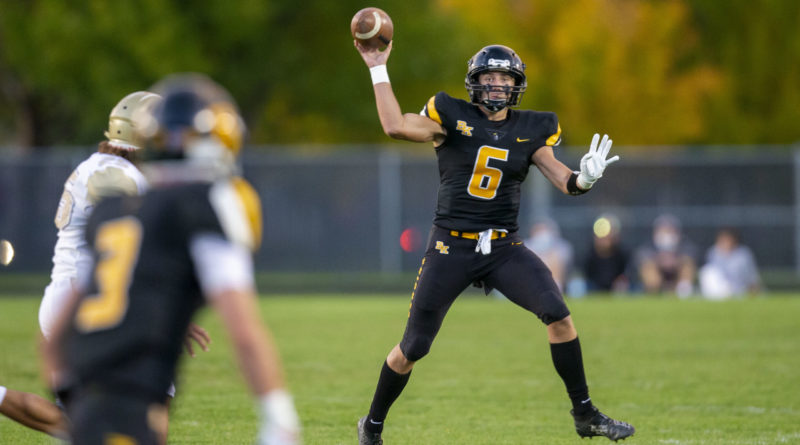 Here are the top performances that caught our attention across the state in Week 8 of the Idaho high school football season.

Did we miss anyone? Tag us on Twitter or Instagram @SBLiveID and let us know. Names are in alphabetical order. (Lead photo by Brian Losness)

Tossed for 163 yards on a near-perfect 12 of 15 passes completed and two touchdowns through the air, as well as another on the ground in a win over Vallivue. (READ MORE)

Rocky’s do-it-all back/receiver broke loose for 115 yards and three touchdowns, headlined by a 22-yard burst up the middle to take a two-possession lead in the fourth.

Passed for 289 yards and two touchdowns while completing 18 of 25 attempts, reports The Idaho Press.

Ran for 132 yards on 10 carries and logged a touchdown in a loss to Skyview, per The Idaho Statesman.

Rushed for 157 yards and a late touchdown in a league title-clinching effort to push his season total past 600 yards.

Turned 13 touches into 132 yards and a touchdown, per The Idaho Statesman.

Accounted for 318 yards of offense — 197 passing yards, 121 rushing — and a touchdown to beat Nampa, reports The Idaho Press.

Snagged two interceptions in a 31-14 win over Meridian to clinch a fourth consecutive league title.

Caught touchdown passes of 92 and 75 yards for 267 total receiving yards, reports The Spokesman-Review.

Tossed for 309 yards in a 31-21 win over Moscow, reports The Spokesman-Review.

Turned 14 carries into 168 yards and three touchdowns in a romp of Centennial, per The Idaho Statesman.

Ran for four touchdowns and 160 yards total on the ground in a win over Nampa Christian, per The Idaho Press.

Caught seven balls for 101 yards, including a 46-yard touchdown catch from Malakai Martinez to put the Warriors on the board.

Ran for 178 yards and four touchdowns in a 52-0 win over Wilder, per The Idaho Press.